Home › Mississippi Towns › Clarksdale › Head Out on the Highway: U.S. 49

Today’s post is the fifth in our reprint of the 1941 publication Mississippi Tourist Guide, which focused on the many attractions along Mississippi’s newly paved highways. (Check out the Intro if you missed it.)

At the progressive town of Clarksdale U.S. 49 begins its one hundred mile southward swing through the great Mississippi Delta, richest natural farming land in the world. Beautiful plantation homes, full-blown cotton fields, and many other sights typical of the cotton kingdom are seen from the highway. Half-way on its journey through the state U.S. 49 comes to Jackson, Capitol City of Mississippi, where five more arterial highways junction. 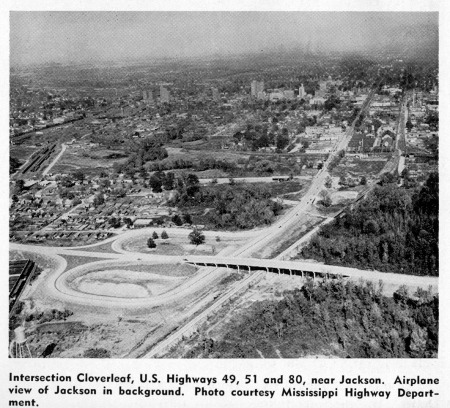 Below Jackson the smooth ribbon of concrete flows through the piney woods section to Hattiesburg, site of Camp Shelby, home of thousands of Uncle Sam’s soldiers. Representing almost every state in the Middlewest and South, the camp is a favorite visiting place of out-of-state travelers, who find many friends and relatives posted here. Leaving Hattiesburg and Camp Shelby, U.S. 49 drops down to the sunny Gulf Coast, opening up the pleasures of America’s Riviera for the tourist. At Gulfport, U.S. 49 junctions with U.S. 90, “The Old Spanish Trail“, which follows the blue waters of the Gulf of Mexico.

Uniformly spaced along the smooth highway, just below Clarksdale, are the interesting Delta towns of Tutwiler, Drew, Indianola and Belzoni, “Heart of the Delta.”

Coming to Yazoo City, “Gateway to the Delta,” the highway takes a sharp turn upward into the hills. Overlooking miles of flat Delta land, Yazoo City with its steep bluffs and wooded slopes offers a picturesque contrast to the table-like Delta land.

Just a few miles out from Yazoo City and off of Highway 49 is Tinsley, center of Mississippi’s new oil development. 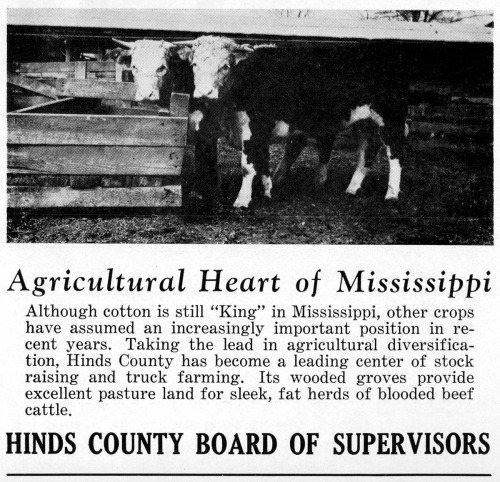 Winding in and out of the hills, U.S. 49 leaves Yazoo City for Jackson, Capital City of Mississippi, recognized as one of the fastest growing cities in the South and center of new industrial activity in this region. Jackson is an ideal headquarters for tourists. Six arterial highways converging here simplify the problem of reaching points of scenic and historical interest. Excellent hotels, tourist courts and cafes of the most modern type make Jackson an inviting stop-over. Mississippi’s million dollar capitol, nine civic parks, the municipal airport and Jackson’s many beautiful homes are favorite spots of interest. 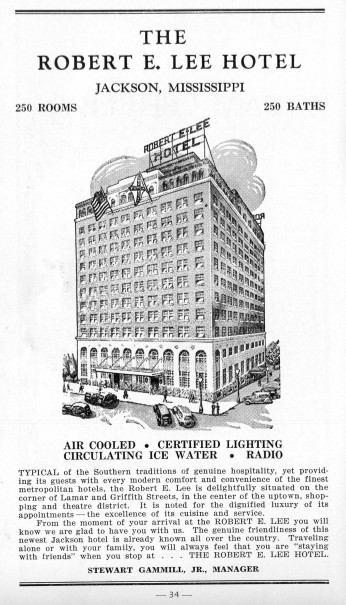 South of Jackson U.S. 49 passes through the Piney Woods, a long series of rolling red clay hills covered with a growth of new longleaf pines [2018 note: MDOT has in recent years destroyed almost all of the beautiful pine-forest medians on Highway 49.]

Mendenhall, Magee, Mt. Olive and Collins, located in the heart of this section, are chiefly noted as marketing centers for poultry and vegetables. Just three miles north on the highway from Magee is Sanitorium, one of the world’s finest tuberculosis hospitals.

Half-way between Jackson and the Gulf Coast is Hattiesburg, long known as the center of South Mississippi’s lumber industry. Lately, it has achieved national prominence as the location of Camp Shelby, Fourth Corps Area Army Camp, housing over 50,000 soldiers, most of whom come from cities in the Middlewest. 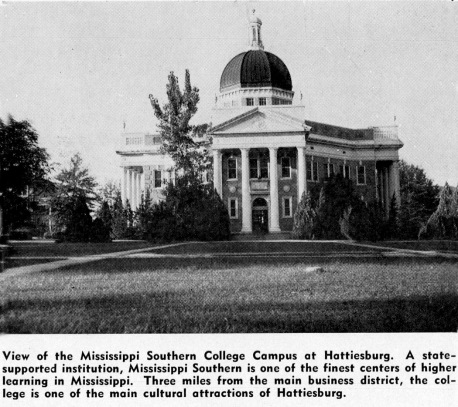 Wiggins, next stop south after Hattiesburg, is a name familiar to all lovers of good pickles. At the location of a large pickle factory, Wiggins annually sponsors a colorful pickle festival.

At Gulfport, key city of the Mississippi Gulf Coast, U.S. 49 terminates its journey through the state by junctioning with U.S. 90. Located in the center of a famous resort region, Gulfport makes an ideal headquarters from which all historical and recreational points can be easily reached. No opportunity for sea-side entertainment has been overlooked by this progressive resort city. 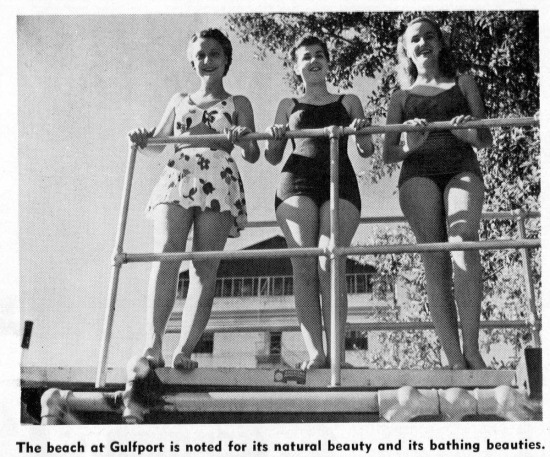 More about Highway 49 and other Mississippi highways . . .

Head Out on the Highway: Old Spanish Trail, 1941

Head out on the highway: Mississippi Tourist Guide, 1941

Lighthouse Churches, By Land and By Sea