A comment on last week’s post about the fast-food chain Burger Chef, along with the company’s news in August 2019 that they would be closing five hundred of their dine-in restaurants got me thinking about Pizza Hut.  The brand’s iconic building style is highly notable, having generated whole websites and even songs about the building’s appearance remaining highly identifiable even long after the pizza purveyor has moved out of individual locations. From what I can tell the first Pizza Hut in Mississippi was constructed in Hattiesburg in 1969.  Quite fittingly it is no longer a Pizza Hut.

Despite this, the building retains a fairly high degree of integrity with the most significant change being the removal of roof pylon.  It’s perhaps due to the fact that the overall place-product-packaging design for the chain changed little over a 30 year period, meaning that someone buying pizza in 1965, 1975, or 1985 would recognize the brand by the building alone. 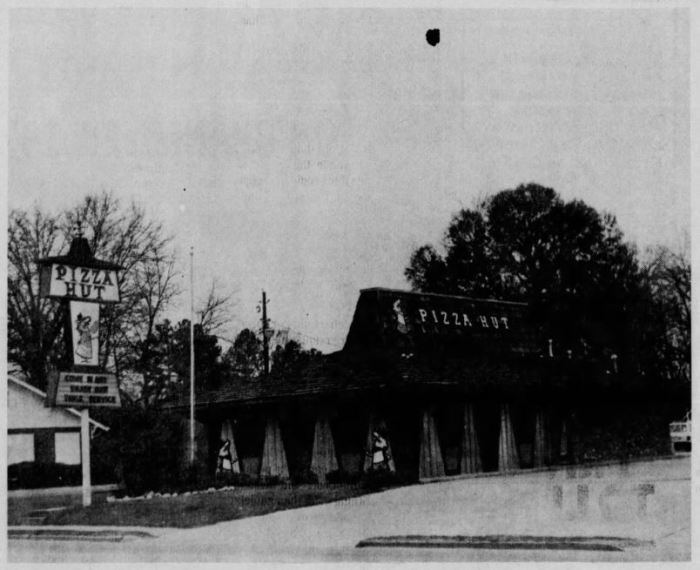 Designed by Wichita, Kansas architect Richard D. Burke, Pizza Hut claims to have patented the design, however, I couldn’t locate the patent. Later in 1969, Pizza Hut established its second Mississippi location in Tupelo, and just like many others, it is no longer a Pizza Hut.  While it retains less integrity than the Hattiesburg restaurant, it is still unmistakable to the used-to-be-a-Pizza-Hut aficionado.

Jackson received the next two Pizza Huts in the state, both of which are still standing.  The first Jackson Pizza Hut on Bailey Avenue retains a pretty high level of integrity, while the restaurant on I-55 has been pretty heavily remodeled.

The red pyloned roof served as a beacon to passing motorists along as a signboard.  In addition to the highly identifiable roofline, the restaurants had inverted trapezoidal windows.  While the rear of the buildings was brick-clad when building code allows the dining room portion of the building was clad in cedar board-and-batten siding.  If local code did not allow this the building would be completely clad in brick.

One of the oldest, best-preserved Pizza Hut’s in Mississippi is on Courthouse Road in Gulfport.  It opened in 1973.

There are probably hundreds of current or former Pizza Huts in Mississippi, so I won’t go on, but it is interesting to see these buildings all outlast their original use in the disposable world of corporate architecture.  You’d be hard-pressed to find another early example of an existing corporate fast-food chain with buildings still standing, let alone still so recognizable. 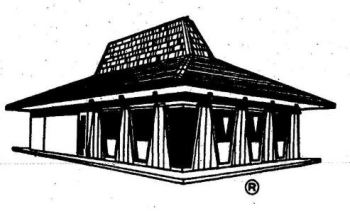 Architectural Twins: One Happy, One Glowering