We had previously discussed the perforated metal lath sheets used for the 1891 construction of the Washington County Courthouse.  In that post wire metal lath was mentioned.  Of the three common types of metal lath (perforated sheet, expanded, and wire) wire is the one I am least familiar with.  In doing research for the perforated lath post I ran across the image of a figure I knew I had seen before.  It’s not every day you see a manufacturer stencil a knight on to their building materials product, so you tend to remember it.  A house in Edgewater Park, in west Biloxi had the same figure peeking out from behind its stucco.  Apparently someone at MDAH saw the same image and snapped a photo that would eventually wind up in the MDAH HRI Database.

In the image of our Biloxi example (seen above) part of the “STEELTEX” script can be seen along with the phrase “Patented Aug. 24, 1926“.  Also seen is a stylized knights helmet with a plume that is faded but still reads “Sir Fabric”.  Sir Fabric became a mascot for the National Steel Fabric Corporation in early 1922 shortly after the company was bought by the Pittsburgh Steel Company.  When Steeltex was introduced in 1926 the only change to Sir Fabric  was to the text on his shield when he was used for the Steeltex advertising spots.  As to why a knight was pick as the mascot for a wire lath company it is not quite clear.  My guess as to why a knight was chosen is based on an early National Steel Fabric Corporation ad that defined the company’s wire fabric as the “Protector of Concrete Roads”, when it was used as reinforcement in concrete roads.  The “Fabric” in Sir Fabric referred not to the backing material, but rather to the fact that the wire lath was produced in rolls, giving it the appearance of a roll of fabric.

In 1927 The National Steel Fabric Corporation -as a division of Pittsburgh Steel Co.- published “Better Walls for Better Homes” a tome dedicated to the advertisement of a material that was a combination of their product know as “National Steel Fabric” and a proprietary backing material to make Steeltex.  The benefit of Steeltex over plain ol’ wire lath is that when plaster or stucco is applied to the heavy two-ply waterproof backing material it produces a monolithic slab on both sides of the reinforcing steel wire lath.  On page 9 of the booklet the manufacture described their product as such:

“STEELTEX is a modern reinforcing base for plaster, consisting of a 2″x2″ fabric or mesh of cold-drawn, galvanized, welded steel wires, securely fastened to which is an extremely tough and heavy waterproof backing.”

The theory of using the wire along with a backing is that the plaster encapsulates the wire lath.  It eliminated the need for the traditional plaster key to hold the plaster to the lath.  The traditional plaster key has no structural value, and being a somewhat fragile element it was always in danger of breaking off due to vibrations or other shocks to the wall.  Damage caused by things such simple things as doors slamming open and closed or nails being driven into walls.  Before the Steeltex product came to be the only other method to achieve added protection for plaster keys was a technique known as back plastering-the act of applying plaster to the keys on the back of a plaster wall.  Back plastering was an added expense and had one obvious drawback because back plastering could only be done to one side of a plaster wall, leaving the other side with out added protection.  Below are some details from the 1927 Better Walls For Better Homes and from the 1926 issued patent, that show what the wire lath and backing look like prior to plaster application and some examples of a three coat plaster encapsulating the wire lath.  If you click on the images you can read some of the instruction given by Steeltex.  Each sheet had the installation instructions printed directly on the backing. 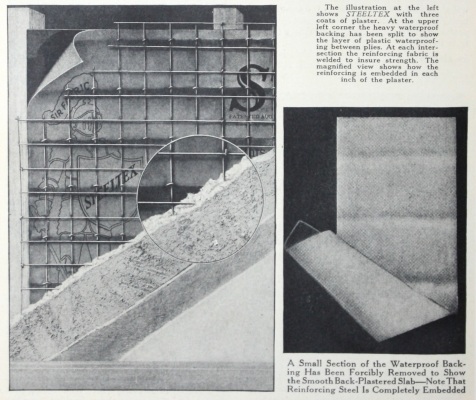 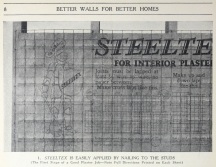 Steeltex was advertised as being superior to other forms of metal lath because it had the following features: Minimized cracking plaster, provided damp-proofing, provided insulation, enhanced the sound deadening quality of plaster, and had a low-cost for the material and its installation.  The document even suggested that the product was the perfect material for storm or earthquake prone regions due to the fact that the material made the structures in which Steeltex was employed stronger.  That does make some sense because the material was designed to be used as reinforcement bar for concrete.  If we look at the photos below of our Biloxi example we can see some truth to the manufacture’s statement, but maybe not to the extent that the folks at National Steel Fabric had hoped.

The building was still standing after Katrina.  The image of Sir Fabric was exposed when one of two decorative columns on a mullion came off the building.  It is entirely possible that this damage was caused by architectural element looting rather than actual storm damage.  The debris from the house just to the south of our example structure did extensive damage to a side porch and the building’s south wall which the porch was tied to.  Nor did the several feet of water inside help matters.  But aside from the damage that was most likely caused by the porch pulling away from the building the Steeltex plaster looks to have weathered the storm in good condition, especially considering many newer stuccoed buildings folded under Hurricane Katrina’s wrath.

In the comments section of the Perforated Lath post reader Robert Bailey brought up the excellent point as to how these laths were secured and how that might vary from traditional wood lath.  National Steel Fabric Corp. had apparently given this topic some thought as they included the diagram below.  It shows special furring nails used to secure the wire lath to the wood framing and permit space between the paper and the wire to allow for complete encapsulation of the wire lath by the stucco coat.   While this was the recommended practice by the manufacture, studying the example photograph it looks like the builder of our Biloxi example used galvanized metal staples to secure the Steeltex wire lath to the wood framing.

It’s sad that this building was needlessly lost after standing for several years post Katrina.  It would be even sadder if we didn’t have the opportunity to learn something from this structure.  Like a Knight of the Grail, Sir Fabric waited many years hidden from sight to share his secrets with us.

Sir Fabric, c.April 1925 as he appeared prior to the debut of STEELTEX.  Detail from Reinforced Concrete Floors. National Steel Fabric Corporation. Pittsburgh, PA 1925