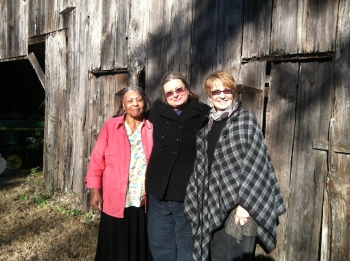 Bev Taite, Becky Jolly-Wood and Noel Vantol on the back roads of Moss Point.

On a sunny day last week, I met up with my preservation buddies in Moss Point to explore the little community of Kreole. Our tour guide for the day was Bev Taite, famous in these parts for the fabulous Taite Burger.  The area was originally known as Laine, named for Gideon Laine, who helped bring in settlers through the Finnish Land Company in the early 1900s (who knew?). The opening of the Southern Paper Company mill in 1912 spurred development in the area, which once boasted many shops, a depot and a school for the children of the millworkers.  Sadly, nothing remains today of the once-bustling mill, which closed in 2001.  We spent the day cruising up and down neighborhood streets, pointing out local landmarks and admiring the several fine churches in the area.  Many of the millworker’s houses still remain, as does the old Haarala’s Dry Goods Store, now a popular lunch spot.

Much of the history of Kreole was documented by historian Eugene Pierce, who compiled a rich assortment of advertisements, newspaper articles and photographs in 1998.  Stories about storms that flooded the town, petitions opposing the ban on trammel nets, photographs of newlyweds and attendance records for Ms. McFarland’s class in October 1917 capture a bygone era.  Mississippi is fortunate to have many local historians like Mr. Pierce, whose work helps preserve a link to our past.  Driving around Kreole with Mr. Pierce’s guidebook and Bev’s rich narrative, we were able to conjure a vision of what this area must been like during its boom years.  So, next time your preservation commission is looking for an outing, take a trip back in time and see if you can find some forgotten history right in your own backyard.