Before I jump in to this week’s Roundup, I want to remind everyone that the Statewide Preservation Conference is this week on the Gulf Coast.  This is a year when Mississippi Heritage Trust gives out preservation awards, so I expect we’ll see press releases from that even popping up in future roundups.

Beverly Drive-In, as it appeared in 2008

A story this week out of Hattiesburg brought me back to my first official post as Roundup person as it was a story on the Beverly Drive-In.  Back in late October 2010, the site was lost to a fire, which has been under investigation ever since.  This week, the story is that the investigation is now closed.  Investigators have determined that the fire was caused by “human hands,” however it is not clear “whether those hands set the blaze to intentionally burn down the structure or whether it was a fire set by trespassers for warmth that got out of control.” 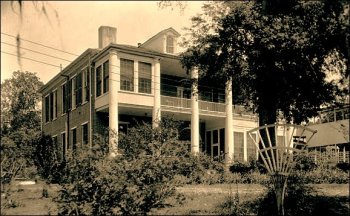 Down in Natchez, Arlington was in the news again.  This is a National Historic Landmark that suffered a fire in 2002, but whose owner has not done anything to repair the damage.  Preservationists have tried to help the building’s owner by putting a roof on the building following the fire (I believe that was Historic Natchez Foundation’s doing) and there has been a lot of interest in trying to get the building sold to someone who will take care of the property, but to no avail thus far.  Within the past year or so, the City has started once again to go after Dr. Thomas Vaughn – the owner – for violations of local ordinances, including the Demolition by Neglect section of the Preservation Ordinance.  The report in the Democrat is that the Board of Aldermen unanimously voted to have an attorney pursue the collection of the $43,000 in fines that have accumulated since the Demolition by Neglect ruling was made in 2009.  City officials also want to pursue a case under an unsafe structure code that would require Dr. Vaughn to secure, then repair, the house.  Under this, if Dr. Vaughn refuses to do so, the City can then do the work and charge the costs to Dr. Vaughn.

Down in Moss Point, last week the story was that the Board of Aldermen voted to demolish the old 1920s fire station.  That story indicated that the Mayor was opposed to the Board’s decision, and this week the story is that she will officially veto it at the May 1 meeting.  We will keep watching this one to see how it develops.

Starkville is looking at adding another National Register District – and held a public meeting last week to discuss it.  Stories from the local paper and over in Columbus discussed the potential Downtown Historic District prior to the meeting and the Starkville paper did a follow-up after.  MDAH officials explained the benefits and the process of nomination to the National Register.  Seems that some people in Starkville are concerned that a district being put on the National Register automatically leads to a local district – but officials reminded citizens that the local designation process is a different and more local discussion – with plenty of opportunity for public input.  The National Register nomination for the district is scheduled to be on the agenda for the May 17 Mississippi Historic Preservation Professional Review Board meeting.

Back in January, we noted that the old high school at Mendenhall (now Mendenhall Elementary) had been designated by the Mississippi Department of Archives and History as a Mississippi Landmark. But according to a Mendenhall alumni website, the school district is sticking with its plans for demolition and is appealing the decision at the next MDAH Board of Trustees meeting. Check out the alumni blog “Tiger Tales” for several stories about how interested parties can get involved.

Another Hattiesburg story this week is that the Ross Building has new owners.  Everything in the story indicates that the plan is to turn the former office building into downtown apartment housing.  Current downtown apartments in the Hub City have a 100% occupancy rate and it sounds like there might even be a waiting list for the units.  I would assume that our preservation friends down in Hattiesburg have told the new owners about the opportunity for Preservation Tax Credits on their project – if not, then they should because it sounds like their plans would made for a great adaptive reuse story.  Here’s hoping that we get another great success story from it.

Up in Tupelo, the old Post Office that has been serving as the Community Development Foundation offices is about to undergo some renovations.  According to the story, the project “involves an upgrade to the building’s ceilings, doors, floors, walls, plumbing, electrical and lighting system and bathrooms.”  This plan also includes “some light demolition but otherwise leaves the interior structure unchanged.”  The story doesn’t make it clear if the CDF offices will move back into the building when the renovations are completed, or if these are being done prior to finding a new occupant.  Hopefully, three months from now when the renovations are completed, we’ll have another story that helps fill in that gap.

A couple of celebrations made the news this week.  One down in Lucedale was for the opening of County Line School for tours.  The one-room structure is in the city park and the story indicates that it is the oldest surviving school building in George County and gives a good narrative of how the building got to where it now is.

In Smith County, WLBT reported that hundreds gathered in Raleigh for the 100th anniversary of the county courthouse.  In attendance was former Florida State University football coach Bobby Bowden – grandson of the original contractor on the project, Robert Cleckler of Little-Cleckler Construction Co.  Kind of a cool connection if you’re an FSU fan.

Anyone interested in how Pilgrimage in Natchez did should see this story about the ticket sales and attendance.  It sounds like this year was on par with last year – but the final numbers will be ready in May.

Wrapping up in Hattiesburg again, the American had another Then & Now feature.  This time, they looked at USM’s oldest residence hall.