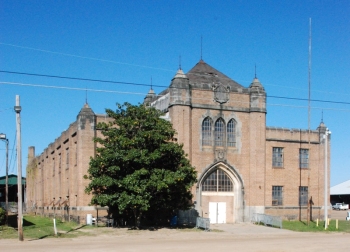 Those of you who have visited the Mississippi State Fair might have noticed an exotic brick building with gothic arches off to the side near High Street in Jackson. This is the old Hinds County Armory, built in 1927 and designed by Jackson architect Frank P. Gates, one of the founders of the Mississippi chapter of the AIA. The old armory has been vacant for 30 years. It’s owned by the Mississippi Fair Commission, whose imagination apparently extends only so far as wondering what little patch of grass should be paved over next. Why in the world can’t anyone in that organization see that this should be the crown jewel of the fairgrounds?

The Hinds County Armory was designated a Mississippi Landmark way back in 1986, was listed on the National Register in 2000, and placed on MHT’s 10 Most Endangered List just this year. Here’s what the 10 Most listing had to say about the building:

The Hinds County Armory is believed to be the oldest surviving 20th century armory in the state. It may be the only building from that era intentionally built as an armory. The National Guard used the building as a training facility for nearly 50 years. The armory was one of the primary mobilization sites for Mississippi troops who served in World War II. Many returning soldiers mustered out in the armory. It is one of the state’s finest examples of Gothic Revival architecture and one of the few secular buildings employing the style.

The building was damaged in Jackson’s 1979 Easter Flood and has not been used since. The roof leaks, and the building continues to suffer from water damage and a lack of maintenance. Located on the state fairgrounds, the Mississippi Fair Commission has no current plans for the structure. Like many public entities which own historic buildings, the Fair Commission is unlikely to invest funds in the building absent a plan for use. As recently as July 2007, the building was called “useless.” It is clear that the current owners do not intend to invest any money in the structure. Public support is needed to encourage the Fair Commission to at least stabilize the structure until a new use can be developed; otherwise this unique historic structure could be lost forever.

According to the MDAH listing of previous Community Heritage Preservation Grant winners, the Armory received a $100,000 grant back in 2002, but the grant money was never spent and I suppose eventually has gone to other projects. Surely that money could have been used to get the roof back into at least a serviceable condition, but now, as you’ll see below, there are huge holes in the roof throughout the building.

Just as an aside, I didn’t realize how very unattractive our fairgrounds were until I went to the Texas State Fair a few years ago. The Texas Fairgrounds have a 100-year-old Centennial building and a lovely core of 1930s Art Deco exhibit buildings, neatly laid out along a wide grassy median. Then as you wander onto the fairway, there are actual live trees (!) and pleasant little grassy areas that invite the weary fairgoer to sit and watch the rest of the world go by. Up until then, I just thought fairgrounds were supposed to be enormous seas of asphalt that got all sticky during fair time, and that green spaces were only meant for horses and cows. I know we’re not as big or rich as Texas, but once again, this is a failure of imagination and vision more than a failure of money.

Anyway, an anonymous source has supplied some recent photos of the armory that show just how bad the roof’s condition has become. The building consists almost entirely of a large concrete-floor drill area with wooden bleachers to two sides and a stage at one end. This shouldn’t have been too difficult to clean up after the Easter Flood–the coliseum also has a concrete floor, right? and that got cleaned up and re-done. It’s shameful that the Fair Commission has allowed this wonderful building to deteriorate to this state, and it’s shameful that there’s not even a wiff of imagination about what could be done with this building. What’s the deal? 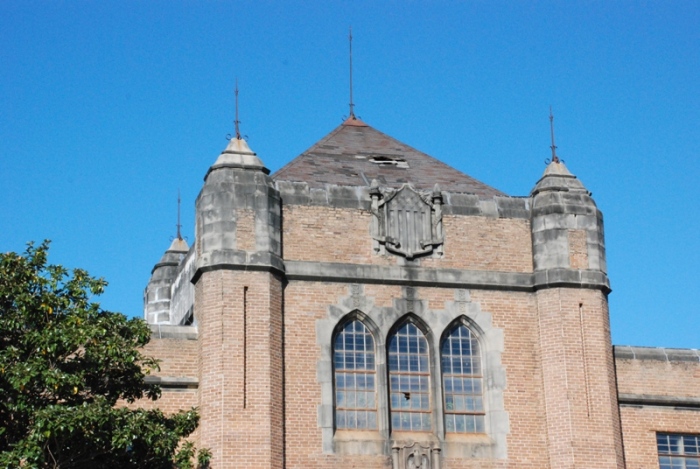 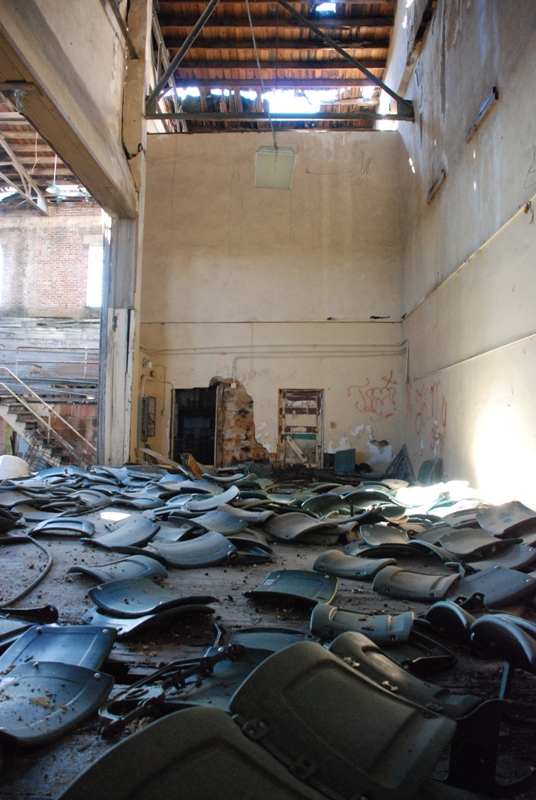 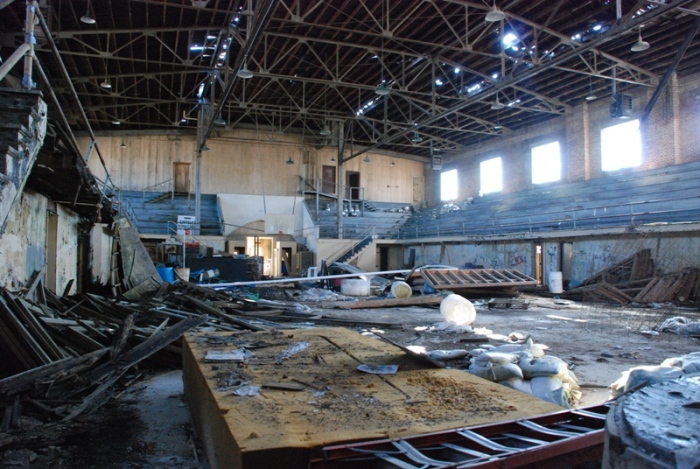 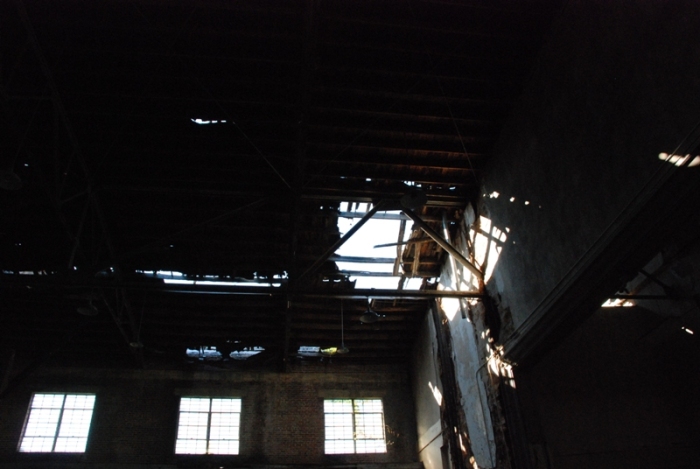 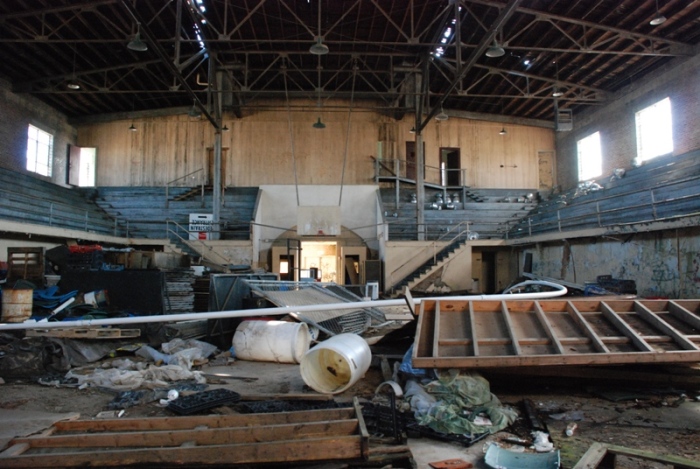 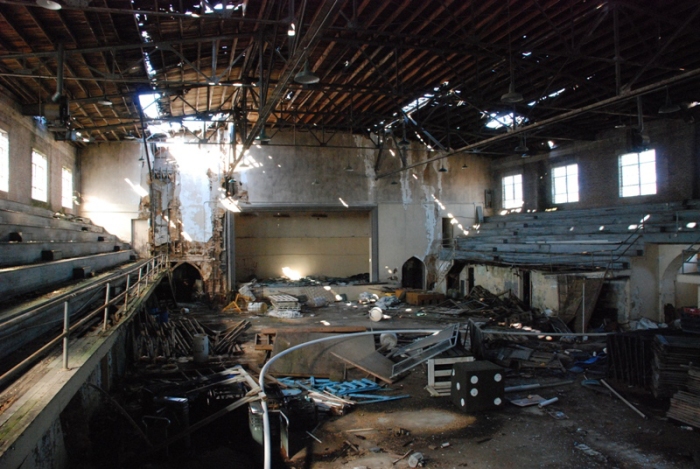