We’ve spent the last two weeks looking at lost landmarks and restored landmarks on the Coast after Katrina, but I wanted to end this series by recognizing that the vast majority of preservation work on Mississippi’s Gulf Coast since 2005 has been done by regular people fixing up their own houses, often under the most difficult circumstances. The Mississippi Dept. of Archives and History’s Katrina Grant Program has helped alot, especially when insurance money hasn’t been forthcoming, but many owners were already slowly shoring up and repairing their shattered and flooded houses before this program got off the ground in late 2006.

To recognize all the small and a few great residential landmarks that make up the historic neighborhoods of the Coast, I’ve put together a few before-and-after collages to show the types of houses and the massive damage that owners undertook to repair. Work is still underway, and many owners are either just now getting back into their houses or are still getting them habitable. This is just a sampling of the hundreds of historic houses being repaired from Waveland to Pascagoula, and to me these private owners are the true preservation heroes of Katrina. 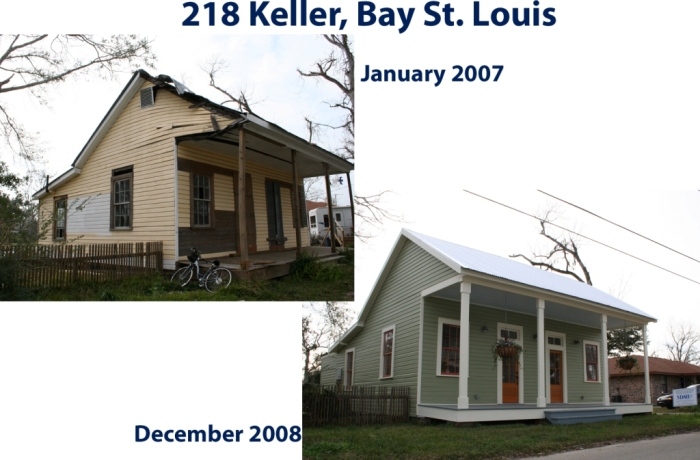 **all photos courtesy Mississippi Department of Archives and History

This is the last in the Katrina Survivors series–see other posts in the same series: