On Tuesday (7-13), the South Delta Regional Housing Authority (SDRHA), a quasi-governmental agency located in Leland and apparently funded solely or mostly through the U.S. Dept. of Housing and Urban Development (HUD), demolished the oldest house in Greenville, a building individually listed on the National Register of Historic Places since 1982. The Finlay House, a richly-detailed wood-frame Italianate double-galleried townhouse built around 1872, was the only Italianate-style building left in Greenville before the South Delta Regional Housing Authority, in its infinite and arrogant wisdom decided it was better off being sent to the landfill.

According the article in yesterday’s Delta Democrat Times “Oldest Residence in Greenville Falls to Heavy Equipment,” the house had been renovated by Hank Burden.

A local construction contractor, Burdine said he not only lived in it, but spent years renovating the home, trying to keep its post-civil war and Italian-styled architecture preserved.
. . . .

The house was sold to SRDHA by Burdine, who himself purchased the house to save it from demolition and moved it to the Poplar Street location.

Burdine said he sold the house to the SDRHA because he believed that SDRHA would make sure the house was properly maintained.

Yes, well you would think a government agency would take care of a building that had such clear historical value, wouldn’t you? You would also think that a “housing authority” would find people who needed, uh, a house to live in and match them with this beautiful and solid old house. Well, in the case of regional housing authorities, you would be wrong.

I can almost see Ann Jefferson, executive director of the South Delta RHA, as she proclaims defiantly that she had a permit from the city and that the building wasn’t a “historical landmark.” But as the DDT article notes, a simple search on the internet, either by googling “Finlay House” or just the address  “137 Poplar Greenville” takes you pretty quickly to the National Register website. Hmmm . . . Her quote at the end of the article that in her two years at SDRHA no one had approached her to buy the house and she couldn’t give it away–again, why are they trying to give away a house they could place people in? And did anyone know they were trying to sell it? Why would anyone assume that they were? As for the house being “run-down”? The photos don’t seem to show that the outside was in bad shape, and if it needed work inside, isn’t that something a housing authority does on a regular basis?

Besides that, SDRHA is a federally funded organization, isn’t it? And that means it has to abide by federal laws, in this case the National Historic Preservation Act of 1966. The Preservation Act was passed during Urban Renewal specifically to address the problem of federal agencies and their funding trampling all over local communities. The Act specifies a process (the Section 106 process) whereby federal agencies and their minions have to submit proposed projects to the State Historic Preservation Office (in our state that’s the Mississippi Dept. of Archives and History) for review. In short, public agencies, even housing authorities, can’t just run off with taxpayer money and demolish historic buildings without going through this process.

Here’s what the law says, as found by googling “Historic Preservation Act” (italics mine):

The head of any Federal agency having direct or indirect jurisdiction over a proposed Federal or federally assisted undertaking in any State and the head of any Federal department or independent agency having authority to license any undertaking shall, prior to the approval of the expenditure of any Federal funds on the undertaking or prior to the issuance of any license, as the case may be, take into account the effect of the undertaking on any district, site, building, structure, or object that is included in or eligible for inclusion in the National Register. The head of any such Federal agency shall afford the Advisory Council on Historic Preservation established under Title II of this Act a reasonable opportunity to comment with regard to such undertaking.

Speaking of easy internet searches, I think it’s telling that I have been able to find very little information online about either the South Delta Regional Housing Authority or the ways that HUD finances the housing authorities in general. This is a good indication that neither HUD nor SDRHA is interested at all in letting the citizenry–the taxpayers who fund them–get a sense of what they do or how they operate. So much for government transparency–it’s all smoke and mirrors with them.

If the Section 106 process is carried out at this point, MDAH would inform HUD and SDRHA that they have broken the law by “Anticipatory Demolition” and question why federal funds were used to demolish a National Register-listed property. Here’s a definition of that term that I found on the Advisory Council for Historic Preservation’s website simply by typing “Anticipatory Demolition” into my search engine:

Congress also added a new provision that directs Federal agencies to withhold grants, licenses, approvals, or other assistance to applicants who intentionally significantly and adversely affect historic properties. {56} This provision, known as the “anticipatory demolition” section, is designed to prevent applicants from destroying historic properties prior to seeking Federal assistance in an effort to avoid the Section 106 process.

Perhaps in addition to the threat of regulatory punishments through the Section 106 process, interested local residents, who seem to be furious over this demolition, might consider a lawsuit against SDRHA and/or HUD for violation of federal law. It’s too bad citizens have to go to such measures to get their own government to abide by its own laws.

Another way to move forward at this point is for the newly formed preservation commission to work more forcefully toward establishing local historic districts and to initiate better communication with the City’s planning office so that (presuming they actually did give a demolition permit to SDRHA as Jefferson claims) staff will be more aware of what is and what is not listed on the National Register or locally designated as a landmark.

I know that shame is supposed to be obsolete, but the South Delta Regional Housing Authority, Ms. Ann Jefferson, and HUD should be ashamed of themselves. Very ashamed. 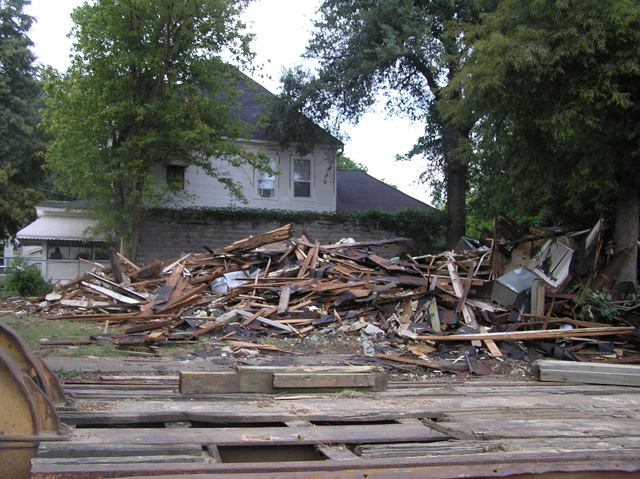