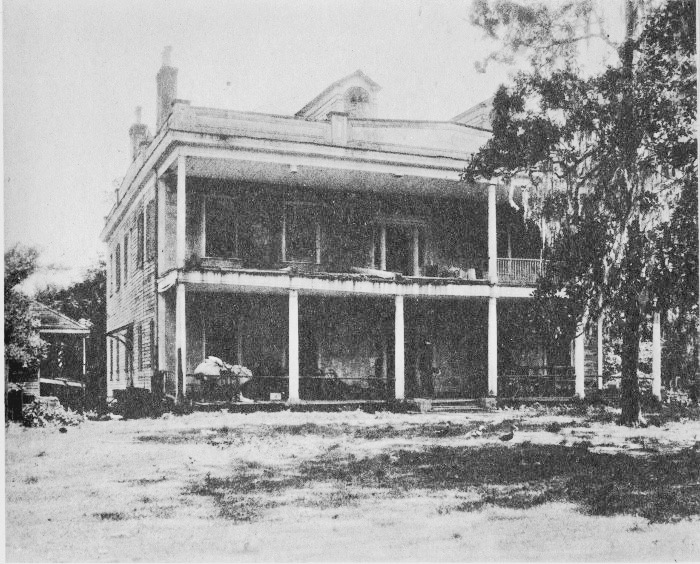 I am certain that long time Mississippians and those from Natchez are quite familiar with the story of Glenwood (aka “Goat Castle”), but I was surprised to find a 2-page spread in the Atlanta Constitution, February 24, 1941.  As usual, it resulted in days and hours of research trying to learn more about Glenwood and its inhabitants before it was known as Goat Castle.

The Mississippi Department of Archives and History, Historic Resources Inventory gives Glenwood’s estimated construction as c. 1840 in the Federal style, 2 1/2 stories with a galleried double porch.  Colin Edward Woodward in the Encyclopedia of Arkansas entry on Octavia Dockery gives the date as “before 1840.”  Glenwood, next door to Glenburnie (or Glenburney) collapsed after 1949, or was demolished 1950 or 1955, depending on which source one uses.

I cannot speculate as to whether it is the same Glenwood, but the first reference I located about Glenwood near Natchez was in the story of “Mount Vernon” (“Beautiful homes of old Natchez: Historic places of territorial, colonial, and ante-bellum days.” Natchez Democrat, May 23, 1915, p. 12), home of William Dunbar, who began erecting the “palatial home” a few miles from Dunbarton–the ‘home place’ after marrying Miss Martha Foeman of Washington in 1833.  William “gave up” Mount Vernon after the Civil War and moved to New Orleans.  Mount Vernon was burned, and the article states that his brother, Mr. Albert Dunbar, married Matilda Ralston in 1852, and lived at Glenwood.  Robert and William Dunbar family members appear in Natchez between 1847 and 1860.  The next reference appears April 8, 1862, when Albert and Matilda Dunbar’s daughter Martha Willis died at Glenwood at the age of 9 months/4 days.  Martha was their 4th child.

Rev. Charles B. Dana, brother of Charles A. Dana, publisher of the New York Sun, bought Glenwood in 1866.  It was described as two miles from Natchez, on Kingston Road, in 1873.  Glenwood appeared in the news in 1896 in reference to entertainment by Miss Page Morris at Glenwood.  Parties for “terpsichorean devotees” and Temple B’nai Israel Sunday School picnic were referenced in 1896 and 1904.   Jennie Merrill lived at Glenwood, Gloucester, and finally, Glenburnie after selling her family home, Elms Court, to her uncle in the 1890s.

Richard Henry Clay “Dick” Dana was born 1871, son of Rev. Charles B. Dana.  In 1908, Glenwood was known as “the Dana place” inhabited by the “young bachelor Richard Dana.”  In 1912, an ordinance to change boundaries of Natchez resulted in adding and excluding portions, and Auburn, Inglewood, and Glenwood all shared a common corner, and Dana’s taxes on Glenwood were delinquent.

Nydia Dockery, sister of Octavia, married Richard Forman in 1888 while she was living in New York with her sister and father.  She and Forman moved to Natchez and had lived there for 15 years.  They lost their home due to a poor cotton crop and were renting in Natchez.  Nydia’s obituary indicated she died in 1911 at Glenwood, the home of her friend Dana.  She asked Dana to provide a home for her sister, Octavia, who was living with Nydia and Richard at the time of Nydia’s death.  In 1917, Duncan Minor bought Glenwood as Dana was again delinquent on his taxes, but was unsuccessful in evicting Dana and Dockery from Glenwood.  Dockery had herself declared guardian of Dana to prevent their eviction from the property–based on Mississippi law prohibiting eviction to someone deemed mentally incompetent.  She would later say she had been the legal wife of Dana since 1902 and the property was not his to dispose of.

In 1932, Jennie Merrill of Glenburnie was murdered and suspicion centered on Dana and Dockery.  The notoriety of the condition of Glenwood by then resulted in the nickname “Goat Castle” for the once-beautiful antebellum home that was deteriorating due to the owners’ eccentricities and lack of sufficient income to care for the upkeep.

The former grounds of Glenwood are now home to a new subdivision, aptly named Glenwood, which also borders Glenburnie.