Home › Architectural Research › Friday is a Gas: Teague & The Icebox

Friday is a Gas: Teague & The Icebox 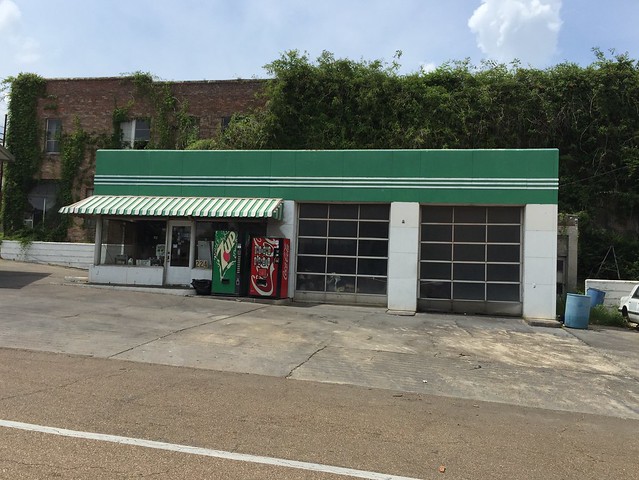 While Teague and icebox might sound like the title of a terrible buddy cop TV show, the Teague and icebox designs of gas stations are some of the most recognizable service station designs from the late 1930s through the 1950s.  Think of a gleaming while porcelain building as the background for the bright red “pop” of a Texaco star.  That’s what industrial designer Walter Dorwin Teague envisioned when he came up with the station design that would bear his name for the The Texas Company (Texaco).

As this Texaco “Teague” station grew in popularity, many other gas station chains adopted porcelain enamel panels, or a less expensive concrete finish that gave these stations the appearance of an “icebox” similar to the Teague design.  Stations were also expanding services to include more sophisticated automotive repair that necessitated the addition of services bays that are lacking from earlier stations. Compare the picture at the top of the post, a former Texaco station in McComb, to the Gulf Oil service stations we saw two weeks ago.

According to the 2016 TxDOT Field Guide to Gas Stations in Texas, there are several variations of Teague stations but the “icebox” style appears to be the one most mimicked by competitors.  The field guide described the identifying features of this Streamlined Moderne-style Texaco station as: an oblong box with (gas pump) island and two service bays, flat roof, white porcelain enamel steel panels (rarely stucco or wood), three green bands around the building above the display and service bay doors, large metal windows that open to the office/showroom, and service areas.

Like any building these service stations changed over time receiving a different paint scheme, such as the example above, was a popular change.  The North State Street Texaco station in seen in the The Matawan Texacos of Mississippi post likely began its life as a “Teague” station before getting the corporate appearance package update to a “Matawan” station in the late 1960’s.

Do you know of a Teague Texaco station, or an imitator icebox in your neck of the woods?  If so let us know!