Today is the 113th birthday of architect Bruce Goff, and the big 1-5-0 for F-L-W.  Last year to commemorate their birthdays we looked at the Mississippi buildings of both men.  When writing that post I realized there was scant information on MissPres about Bruce Goff’s Gutman House, especially considering that his other Mississippi building, the Gryder House in Ocean Springs, is one of the more talked about residences here on MissPres.  So over the past year I’ve tried to correct that with several posts [1, 2] about the Gutman House, which was sadly destroyed by a fire in 1986. 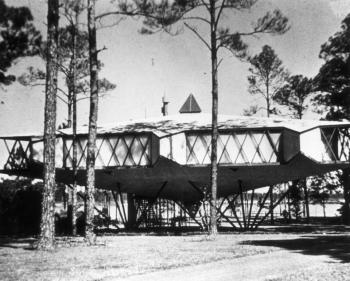 As promised in the comment section last August, here is a post with an interior photograph of the Bruce Goff- designed Gutman House.  The Gutman House stood at 154 Bayou Circle in Gulfport, backing up onto Gulfport Lake. This article, published by the Biloxi Daily Herald in its Mississippi Scene Magazine, describes how the “Star House” came into being, and provides a color plate that black and white photos cannot do justice.

Few Houses have caused as many raised eyebrows and incredulous expressions as The Star House.  Few houses have been the sole destination of as many Sunday afternoon drives.  The pride of its designer and owners alike, The Star House has remained a mystery.  DAILY HERALD staff writer, Marie Langlois and chief photographer Vernon Matthews climbed the stars from what appears to be the landing pad and entered the world that hovers halfway between the ground and the tops of the pines.  Mrs. Langlois, friend of former owners, remembers the house as it was; Matthews’ camera sees the house as it is today; remembering its days of glory, family and fun and waiting patiently for the twenty-first century.

Spaceship On The Ground

And when it was completed, he rested from his labors, took a long look at his handiwork and called it “the creation of a life time.”

This is how the eminent, imaginative Oklahoma architect, Bruce Goff, described the “Star House” he built in Bayou View, Gulfport in 1960 for Dr. and Mrs. Emil Gutman.

Goff, who insist that a house be tailored to the tenant, considered this house the best thing that he had ever done — a dream fantasy interpreted into a reality.

Today, 11  years later, he must still believe it to be his best effort.  Basis for this assumption is the August 1971 issue of The National Geographic Magazine and its lead article on Oklahoma.

A double page spread in full color shows the “Sooner State Showplace” designed by Goff in Bartlesville for Joe D. Price and his Koyoto-born with, Etsuko.  With the exception of the Price’s personal decorations of Japanese art, the interior of the house seems almost identical to the house at 154 Bayou Circle.

The highly individual structure with its avant garde styling keyed to the future, held 15 feet aloft by prongs of blue steel much like a diamond in a Tiffany setting, has been a topic of conversation since the first pile of blue and green bottles was dumped on the grounds and workmen began crushing them into bits of glass.

According to many who have seen his work, interviewed him and discussed the purpose of architecture with him, Goff creates such original structures, both above and underground, that writers work extra hard trying to come up with words with which to adequately describe his creations.

Goff has done many “bests” for clients all over the United States.

The house in Bayou View, its design, furnishings and accent notes did not come about in a day, or week or even a year.  It was the culmination of much thought and planning by Dr. and Mrs. Gutman who succeeded in finding an undisputed architect of ability and imagination who could and would create a home especially for them, suited to no one else except them and their children.

This Bruce Goff did after discussing at length with the Gutmans their special needs, likes and dislikes, their way of life and delving into their personalities.  To do this he lived with the Gutmans as part of the family.  Then the final design came.  In the meantime Goff had become a close personal friend of the Gutmans, drawn together by similar tastes and the chance to put into being his own dreams, as well as theirs, of what a home should be– “up from the earth, soaring into sunlight and tree shadows and encompassing a view of water and skyline that becomes a part of the dwelling area rather than an eye-level view of a piece of ground on which a home is constructed.”

This futuristic home encompasses the dreams of two minds, the dweller and the creator.  To both architect and the dreamers, it is the ultimate in unbelievable convenience, privacy and livability, taking into consideration the individual needs for parents and children, and of tone for the other.

Goff, while on the Coast, stated many times in the course of a conversation, “This encompasses all the things I teach my students. (He, himself, is a former student of Frank Lloyd Wright but now maintains his own school of design).

At the time the house was under construction, many thought the basic design of the structure was “The Star of David,” an idea both Goff and the Gutmans hastened to deny.  “It is a pure triangle,” said Goff, “even to the lighting fixtures under the blue glass triangle that forms the sky-light over the suken[sic], hexagonal lounge in the center of the house.”

In fact, the base on which the steel-reinforced home rests is an inverted triangle of concrete, more than eight feet deep, that gives it the stability few homes in this area have.  On a fill of clay and steel beams thoughtout[sic], Goff said neither hurricanes or high water will have much effect  on this dwelling.  He was proved right when Camille came along two years ago and it stood her ground and went unscathed in an area where other homes were damaged by rising water and winds.

What stands on the former Gutman House site today…

Like Loading...
‹ A Beaux Arts Swimming Pool Design in Mississippi?! – Aberdeen’s Acker Park
Friday is a Gas: Teague & The Icebox ›