If you’ve ever read the MissPres post The Beauty of Modernist Storefronts, you’ve seen some HABS images of Jackson’s long gone, international style, J.C. Penney department store. This unique building was taken away before it had the opportunity to be appreciated.  J.C. Penney Department Stores were founded by Missourian James Cash Penney (very cool name).  Penney stepped down from his chairman of the board position in 1946, so the construction of this one of a kind looking store in 1948 might have been related to a push for expansion by the new board chairman.

So imagine my surprise when reading the St. Louis, Missouri based B.E.L.T. STL (Built Environment in Laymen’s Terms) blog and I saw the below photograph of the J. C. Penney department store in the Wellston area of St. Louis.  An image of the below building is also featured on that websites header.  The buildings -heavily inflenced by Edward Durell Stone’s 1937 New York City Museum of Modern Art building– seem to have both been built in 1948 by J.C. Penney, then abandoned in 1976, with the Jackson building being demolished in 1979.

I’ve always had the impression that Mississippi and St. Louis have had a connection similar to Mississippi’s connection to Memphis and New Orleans.  I am not sure where my impression came from but it might be related to the river connection the city and our state share or to the work of St. Louis based architect Theodore Link.  The MDAH HRI database doesn’t list an architect for the Jackson Penney’s building, but the St. Louis building was known to be designed by the local St. Louis father and son architecture team of William & Bernard McMahon.  The St. Louis JCP building was listed on the National Register in 2008.  A copy of the nomination can been found on the website of the St. Louis Mid Century Modern organization Modern STL.  The exterior description from the National Register Nomination could be for either building.

…(the) J.C. Penney typifies the International Style of Modernism through its rejection of ornamentation, incorporation of horizontal ribbon windows with cantilevered surrounds and dependence on regularity to organize the primary façade rather than axial symmetry. On the street level, a plate glass display window (now boarded) with granite base and two cylindrical granite-faced columns divide the primary façade into four bays.  A narrow section of stucco wall with incised grid and granite base frames the easternmost corner of the display window, while a smooth stucco wall with granite base punctuated by a boarded over opening frames the western corner of the first floor. The inset primary entrance with two sets of double doors (now missing), a black terrazzo floor and angled display windows atop granite bases fill three bays west of the large display window.

The second and third levels of the primary façade are identical. On each level, a horizontal ribbon of metal sash windows with projecting surrounds punctuates the wall above the inset entrance. Metal sash windows of two widths comprise the glazed band; two mullions frame a hinged panel above a horizontal bar in each window. Stucco on the façade’s westernmost bay is smooth, while an incised rectangular grid divides the three easternmost bays into panels. Cantilevered window surrounds on the horizontal band of ribbon windows begin flat against the smooth stucco wall on the west and gradually project outward from west to east, echoing the site that slopes upward from west to east.  Inoperable lights in the horizontal window bands frame the primary façade’s two columns, which continue upward from the ground level on the interior of the building as they continue to divide the primary façade into four bays. Above the roofline, these columns support a reinforced concrete canopy that serves as a partial cornice that floats above the western half of the building; cutouts with rounded edges frame views of the sky over the two westernmost bays. The canopy attaches to a stair tower that projects above the roofline on the west. A square window with cantilevered surrounds punctuates the paneled wall to the east of the horizontal window band. Other features on the primary façade include a metal flagpole that projects above the roofline and attaches with brackets to the primary façade over these square windows…

The biggest physical differences are the heights and widths of the buildings.  The St. Louis building has three floors while the Jackson building had four.  While in the images the St. Louis Penney’s looks wider the Sanborn maps tell a different story.  The Jackson Penney’s was wider façade at 52′ compared to a 44′ facade for the St. Louis structure.  But the most noticeable difference might be the round verses square accent windows on the left hand side of the structures.  The concrete canopy above the roof for the STL building aids in its horizontal appearance, while the JAX building’s canopy aids in a vertical appearance. 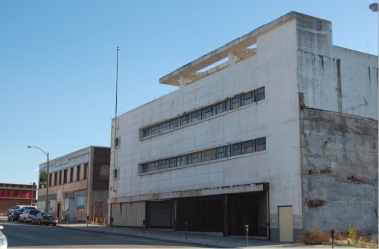 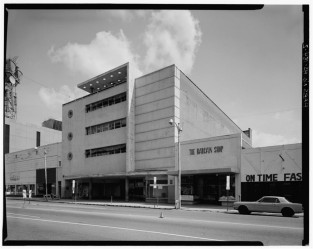 So did the McMahons design the Jackson J. C. Penney’s?  I haven’t been able to find out, but I am continuing the search.  While the St. Louis Penney’s is handsome, I like the Jackson one myself as I think the design was taken a little bit further.  It can be hard to believe that at one time a department store was making bold statements with its architecture.  Currently the St. Louis building is vacant, but has an owner that wants to see it restored.  Hopefully this great building can overcome its hurdles and avoid the fate that befell its Jackson sibling.