History of Art in MS: Churches (I)

Well, this is embarrassing. In October 2010 I started a Book Quotes series from the valuable little book History of Art in Mississippi, published in 1929. After a week, I hadn’t made it through the chapter titled Architecture, and I promised to finish with a few extra single posts. As you know,the best laid plans of mice and men, etc. (what’s the rest of that phrase anyway?). Recently I was going through a stack of books next to my computer and lo and behold there was History of Art, and I decided to go ahead and finish off the chapter with the long section on “Churches.” I’ve divided it into two parts since it’s pretty long, but I hope you’ll find it worth your while and worth the wait. As I mentioned back in the first post, one of the things I like about this book is that the authors took a broad view of architecture, noting both historic buildings and more recent high-style buildings of note.

If it’s been so long you’ve forgotten or you weren’t hanging around these parts back in those old days, you can start the chapter at the beginning (and you can access all of the Book Quotes series under the “Series–Book Quotes” tab up top:

There are many historic old churches in Mississippi, also some very fine new ones of a later era. On passing through the old towns one often sees a dear little Gothic church slumbering beside a fine new modern church structure, with its efficient-looking parish house. In fact Mississippi is a very ecclesiastical state, and the churches have always taken a prominent place in community life. 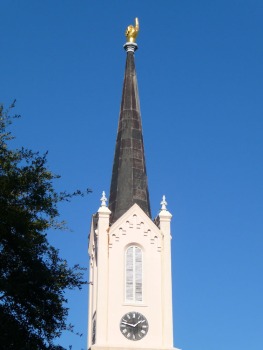 Take quaint Port Gibson, an old town in the center of the state with many historic associations. On its main residential street, cutting through the heart of the town, are eight church buildings within three blocks of each other. Most of these churches are of the old time Gothic architecture, grown old and grey with moss and surrounded by ancient cedar trees–and no tree signifies antiquity as does the gnarled old cedar. One of these edifices is particularly quaint, the Presbyterian church, erected in 1859, with a large hand nine feet high, on the summit of the spire, pointing a fore-finger to the skies above. The original hand, put there some half-century ago, was of wood, but giving way to the inroads of time, wood-peckers and bees, it was sent back to St. Louis and there a bronze hand cast in its pattern. An interesting fact also is, that the original carpet still covers the floor. This carpet was purchased in the North just before hostilities broke out between the states, so complete payment was never made.

As far as is known the hand on the spire is the only one in the South, so to the Port Gibson church goes the unique distinction of being the only church to truly point the way to heaven to the passerby.

There are many churches in Mississippi, new and old, and some are quite beautiful. It is difficult to choose among them and pass by so many without a word, other than to say that the prevailing style is an adaptation of the Gothic.

The churches of Natchez have interesting histories, all having been established early in the 19th century and most of the buildings, though restored, retain their original simple and classic forms.

The corner stone of the First Presbyterian Church was laid in 1812. The architectural style is that of the Greek temple but surmounted by clock tower and cupola.

The Methodist church is also built on classic lines, but without tower or steeple. 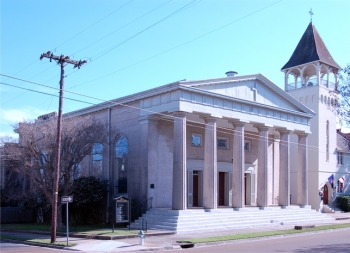 Trinity Episcopal church was erected about 1822 and is a pure example of Greek temple architecture, brick with massive stone columns. Alterations were made in 1838, and later adornments have been added. It ranks as one of the most beautiful places of worship in the city. The interior of the building presents a wealth of rich color tones harmoniously blended.

In historic interest the Catholic church dates further back. One of the earliest missionaries to the children of the Sun was Father Zenobius Membre, who celebrated mass in their virgin forest in the spring of 1683 for the first time. Again in 1698 and in 1721 missions were established in Natchez by order of the king of Spain. St. Mary’s Cathedral is a very handsome Gothic structure with a spire 204½ feet in height.

The Jewish Temple is a new and handsome building replacing the one erected in 1870 and destroyed by fire in 1904. The interior of the Temple is exquisitely finished, the ark containing copies of the scroll of the Law being handsomely ornamented and richly curtained.

A good example of Gothic architecture is the Episcopal Church at Oxford. Begun in 1861 it was not completed until after the war. It was designed by an architect named Upjohn, who did a great many of the capitols and church and university buildings erected during those years, by Southern states. In fact the Chapel of the Cross at the University of North Carolina is quite similar to that at Oxford.

A much newer church, but still in the Gothic style, with pointed roof and battlemented parapets, is the First Presbyterian church of Laurel. This is quite a large church building, as it covers a lot one hundred by two hundred feet, with the exception of a small sunken garden in one corner, and has a total of 11,000 feet under roof.

The church auditorium, and the social service building are connected by a tower seventy-two feet in height. This tower has five floors, with room in the fifth for chimes to be installed at a later date. The windows are distinctive features of the church. The art glass is all old style, imported, and set by traditional methods. In each window is a panel symbolic of some Biblical or church character, ranging from Abraham to the modern reformers.

The organ is also a distinctive feature, and was planned and assembled under the personal supervision of Dr. P.W. McClintock, the organist. It was purchased from the Austin Organ Company of Hartford, Conn., through their representatives in Birmingham, Ala., and is divided into five sections–great, swell, choir, echo and pedal divisions. The echo division is placed on the first floor, extreme front with tonal entrance through a grille in the balcony. The number of piped in the organ totals 3,130, the largest being fourteen inches by sixteen inches and seventeen feet long. The smallest is seven-eighths of an inch in length and weighs only a fraction of an ounce.

The building was started in 1924 and completed in November 1925, and the architect was Rathbone De Buys of New Orleans, with Frohman Robb and Little as consulting architects. Wherever possible Mississippi materials were used in the construction of the edifice. Sand and gravel came from Hattiesburg and common brick from Columbus. Face brick, and all reinforcing and structural steel and cast iron work, were presented by Laurel manufacturers. The splendid lumber for which Laurel has become so famous, cypress, pine and all other timber used was obtained from Eastman, Gardiner Company of Laurel.

History of Art in Mississippi was published in 1929 by Dixie Press in Gulfport and compiled by the Mississippi Art Association based in Jackson and led by president Cantey Venable Sutton.