Home › Architectural Research › WPA Guide to the Magnolia State: No Such Thing as “Southern Colonial”

WPA Guide to the Magnolia State: No Such Thing as “Southern Colonial”

Today’s post is the second in this week’s serial reproduction of the section on architecture in the Guide to the Magnolia State, published in 1938 as part of the Works Progress Administration’s Federal Writer’s Project. As we saw yesterday, this section was apparently written by Beverly Martin, a young architect from Natchez. Born in 1910, Martin graduated from Georgia Tech in 1932, a very bad year to be entering the profession of architecture. Nevertheless, he found work during the Depression with a series of Mississippi firms: Landry & Matthes (Hattiesburg), E.L. Malvaney (Jackson), and Harold Kaplan (Greenville), which means he must have been a serviceable draftsman and also that he spent time in each of the major regions of the state except for the Hills/Black Prairie. However, I do think it’s worth remembering when reading some of his generalizations about detailing and architectural types that he was still a very young man when this was published in 1938, and that perhaps with more study and comparison with other states his ideas would have evolved differently.

What is more important to the layman than architectural types, however, is the life that determined them. This story must, of course, remain conjectural, but nothing could be more intriguing than to speculate upon its varied development. An examination of the timbers in the attic of the fort at Pascagoula reveals them to be so remarkably like the ribs of a ship that it is not farfetched to ascribe them to French ship carpenters. Indeed, the crews of the vessels loading on the Coast were the only artisans, their passengers being unskilled, or else preoccupied in a fruitless search for wealth. A building with walls as thick as the fort was needed for protection from the Indians, not from the elements.[1] Oyster shells, limitless in number, and the misty swaying drapery of Spanish moss were obvious and happy materials. The moss made an ideal binding element for the cement, such masonry improving with age and becoming rock-like with the passage of centuries. The life that could be wrung from the sterile sand of the Coast was as plain and as austere as the fort’s outline. The lot of the French colonists was, if romantic, not luxurious. This much the fort makes plain.

As intimated, Spanish influence was strong in southwest Mississippi architecture. The Spaniard, though a pioneer, did not abandon his traditions. His was the first in Mississippi to warrant the name of a civilized society. Before him, the path along the river was nameless; after him, it had become El Camino Real–The King’s Highway–and the change was indicative of what he brought. His materials were the same the French and English has access to–logs from the forest or timber from dismantled flatboats–but in his particular use of them he displayed a Castilian taste that is expressed in works of art such as Ellicott’s Inn at Natchez. Balance, refinement, and grace are revealed in the slope of the roofs, and in the toothpick colonnettes and ironwork of the slender galleries. 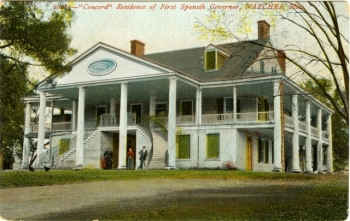 The Castilian’s taste lingered after him. The styles of three nationalities–the Georgian style, traveling southwest with the planter, and the Creole mixture of French and Spanish coming up from New Orleans–met at Natchez. The search for a type or fusion of types that would be best adapted to the regions led for a time into several blind alleys. The Regency, an in-between style that originated in England under George, Prince of Wales (1810-20), left Vancourt and the back portion of Hope Villa among its few examples.[2] More significant was the Greek Revival. Started in England at the end of the eighteenth century, the style, now closely associated with ante-bellum plantation architecture, was spontaneously accepted in this country by the Southerner because of his wealth, his wide travel, and his classic, country-gentleman tastes. The revival in the South was a facile thing. The Mississippian created his own architecture; his slave labor was unskilled, his models no more than pictures or memories; his real pattern was the Spanish. The result was the fusion of styles found at Natchez, predominantly Georgian in character, with columns and pediments relieved by the sloping roofs and galleries that broke across the classic fronts. In Concord, the former home of the Spanish governors at Natchez, which burned in 1901, this fusion probably reached its finest expression. The great columns that gave distinction to the building sprang from the earth itself. The lower story was extended to the face of the upper verandah, whose slender balustrade and smaller piazza posts were deeply recessed under the eaves of the light roof. The effect was Spanish West Indian as much as Greek. Though Dunleith at Natchez is the best remaining example of the adaptation of the classic order to planter comfort, Arlington and Auburn are better compositions and are truer to Natchez in their grandiose conception.

The Southern Planter type of home, while not as impressive as that of the Grand Manner, was more representative. Its use of the classic formula was as easy and as unconventional as the planter’s life. The gallery was the prominent feature, as well it might have been when most of the owner’s life was spent either on horseback or on his porch. Though the proportions were generous, they did not overawe. The stranger stopping by must have felt he was not so much “calling” as “visiting.” In the Natchez areas the best remaining Planter example is The Briars. On the Coast the best example is Beauvoir. Beauvoir shows the West Indian influence in the balanced arrangement of the pavilions at each side of an entirely separate from, the big house. Also West Indian was the custom of devoting the ground floor to the service quarters and using the breezy main or second floor, reached by a number of exterior stairways, as the center of domestic life.

The materials for construction and the kind of workman available resulted in a crudity of detail in contrast to the conception of the exterior design.[3] Though there were notable exceptions in the interiors of some of the Grand Manner homes at Natchez–the spiral stairway at Auburn, for instance–the detail that could not be imported was often unfinished. The scattered faced brick found in the homes may have come as ballast in the one-sided export cotton trade;[4] but where wealth was not sufficient to import brick, the builders fired their own. Around Liberty, axe and adze marks on foundation timbers and sills hewn from the forest are visible in many sturdy homes. Beams were fastened with wood pegs or with home-forged, wrought-iron nails. Heart yellow pine, though stout, was not easily worked–another reason for the lack of finish in the interiors.

The Black Prairie and the Central Hills show the Georgian free from Spanish influences. The slender proportions characteristic of these homes may be explained partly by the fact that they were frame, not brick; the builders saw no necessity for having too thick a column as support for the light roof. The homes were two-story; the planter wanted his second story to be as much shaded as the lower story; yet to have a thirty-foot column with the Grecian-prescribed three-foot diameter would have been an absurdity. The result was the beautifully slender column which distinguishes the Black Belt portico. This break from Grecian simplicity was carried further in the ornament, especially in the bric-a-brac that later was strung between the columns just under the roof line. This was feminine, the planter evidently considering a woman’s taste important, and the architects have concurred in his judgment.

Adding to the undeniable charm of many of the Delta ante-bellum homes were the piers on which they rested, dictated by the necessity of letting the periodic flood run free beneath their floors. The first of these homes on stilts were unsightly, but for a people to whom beauty was a necessity, there soon evolved such combinations as Longwood and Swiftwater.

To look upon all ante-bellum homes in Mississippi, therefore, as alike in a type loosely called Southern Colonial, is to destroy half the charm. The nuances–reactions to sectional climatic restrictions, inherited customs and variations of pioneer life–provided great individuality within the type. (At Vicksburg, for instance, homes has to be built despite the inhospitable looking bluffs. On these promontories, the houses naturally and correctly assumed features less warm, more military, more disciplined.) The crudity of interior detail, the lack of compactness, and the wasted space, as compared with architecture of other States, mean little; the Mississippian of the period was a generous outdoor man with plenty of land and servants. The classic, white-columned house pleasingly fulfilled its function–always the chief criterion of what is good.

Back to post 1 I spent a week in the Dordogne Valley in southwestern France, in a house with walls over a foot thick, composed of rubble stone and finished with a stucco rendering. This in a place where the danger of Indian attack was never on the minds of the builders, and the wars of the Middle Ages were past–this was just the way of building. Likewise with the de la Pointe House referred to here, I suspect.

Back to post 2 While Hope Villa (aka Hope Farm) probably dates to the 1790s, the Van Court townhouse dates to the 1830s, both feature elements of the Federal style, the name applied to buildings in the United States built during the period here referred to as “The Regency.”

Back to post 3 I fundamentally disagree with this statement. Of course there were many “unrefined” and “crudely detailed” houses in Mississippi during the antebellum period (and there are many more thousands being built yearly today), but the houses that fit into the “Grand” category, and even many of those in the more simple “Planter’s House” almost always have interiors that meet the same levels of refinement seen on the exterior. Certainly by the late 1830s and 1840s, places like Natchez contained carpenters, masons, and other craftsmen capable of producing houses both solid and refined. And for those who desired an even higher level of refinement, the Mississippi River could bring them both ornament and the workers to fit it if need be.

Back to post 4 Ahh, the ballast story! No doubt it actually happened at times, but a little thought about the logistics involved in actually transporting large quantities of brick for nothing more than ballast, when it could be produced locally, in fact right on site, with supplies on-hand, makes it seem less and less probable.

This post is second in a four-part series on the Architecture section of the WPA Guide to the Magnolia State, published in 1938 as part of the Federal Writers’ Project. Want to read the rest of the series?