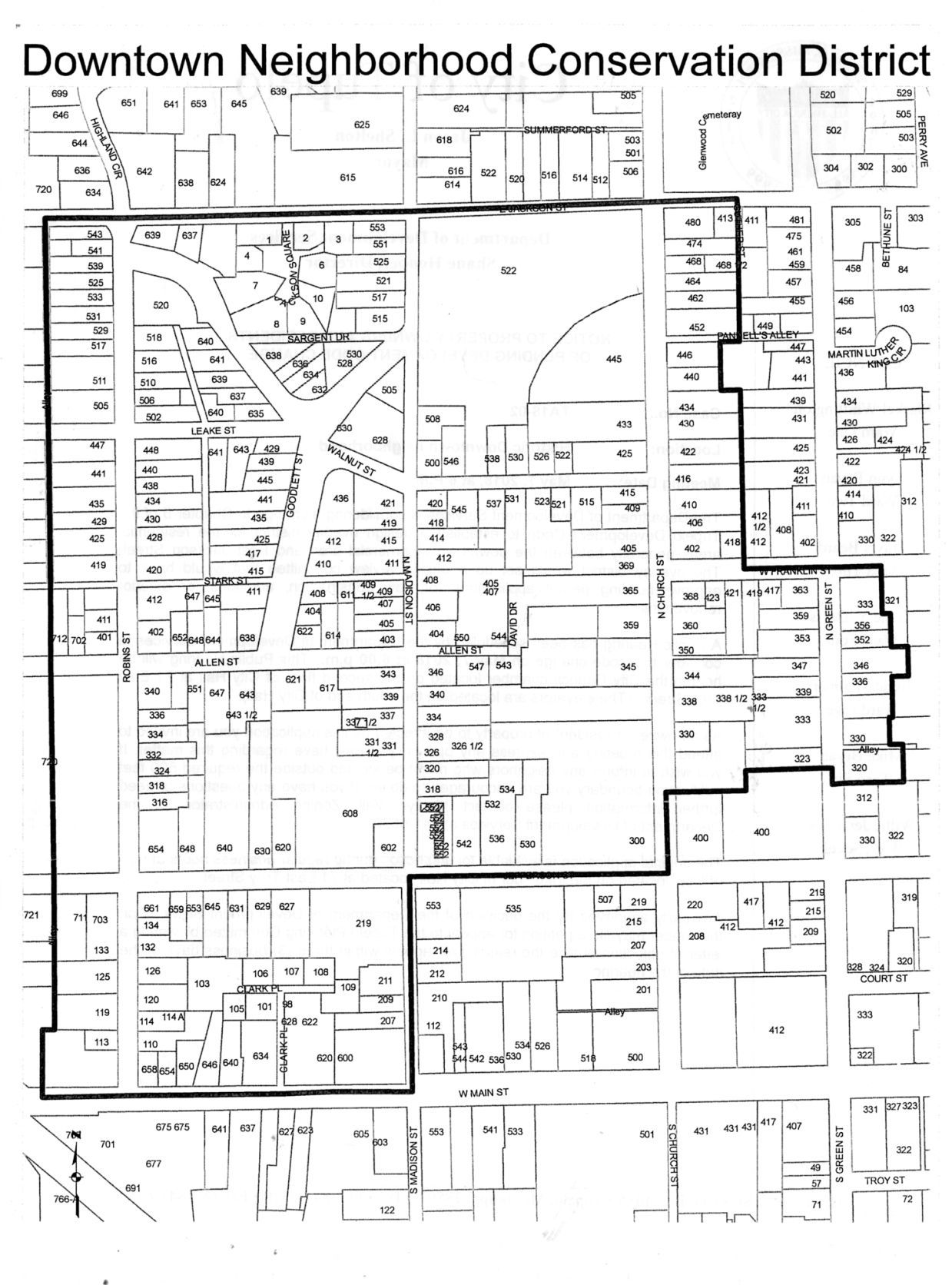 Within an overlay district, new construction and exterior work to buildings within the zone must conform to certain design standards intended to ensure architectural consistency.

From Philadelphia comes word, along with a rendering, of the proposed future work on the corner of Main and Byrd Streets.  This rendering shows the demolition of one historic building and the gothicification of the Ellis theater, along to some changes to the two-story building facing Main Street.  A May 23 public hearing on the design of the Marty Stuart Congress of Country Music has been set by the Philadelphia Historic Preservation Commission.  I know there is always pressure on HPC to rubber stamp big projects that come to small towns, but I hope the Philadelphia Historic Preservation Commission will show the developers that the project needs can still be met, all while protecting Philadelphia’s historic resources.

In Columbus, there is more news about the former Lee High School.  According to a Dispatch article the school could be rehabbed into a mixed use site.  Work would take place in two phases.

During Phase 1, which is estimated to cost between $3 and 5 million, developers plan to put a 16,000 square-foot restaurant or banquet space in what is currently the cafeteria; a 24,000 square foot multi-use venue/community center in the auditorium; and a 22,000 square foot free-standing retail space in the gymnasium. The plan also includes putting approximately 24 1- and 2-bedroom, upscale, loft apartments in the two-story classroom wing of the building. Phase 1 is expected to be completed January 2020.

Phase 2 would see a 4,000 square-foot restaurant on what is currently the front lawn and gym parking lot and a mixed use commercial space, between 90,000-100,000 square feet, that includes retail, restaurant and approximately 20 upscale, loft apartments. That phase is expected to cost $10 million.

The school is still up for consideration as a Mississippi Landmark.  The article cites the date of this MDAH meeting as being on May 23, but our MissPres calendar says the next ML committee meeting isn’t until June 14.

Prospect Hill is nationally significant for its association with the Wade and Ross families and a will contest regarding the emancipation and repatriation on the plantation’s enslaved people. Colonel Isaac Ross came to Mississippi from South Carolina in 1805 and established Prospect Hill. When Ross died in 1836, his will directed that many of the enslaved people be freed and offered transportation to Liberia. His grandson, Isaac Ross Wade challenged the will and a lengthy legal battle ensued. In 1845, some of the slaves set fire to the house, resulting in the death of one resident, and resulted in the hanging of X number of conspirators. Ross rebuilt Prospect Hill in 1854, likely on the foundations of the earlier house. Wade’s executors ultimately prevailed in the will contest and in 1849, somewhere between 250 and 300 freed slaves settled in Liberia. The story of Prospect Hill encompasses the antebellum world of slavery, emancipation, the cotton economy, violence and lynchings. Designated a Mississippi Landmark on January 24, 2914.

From Ocean Springs, there is news of a restoration underway at the Carter-Calloway House.

The City of Biloxi has decided to demolish four historic houses on Forrest Avenue during National Historic Preservation Month.  Public funds were used to purchase these houses and public funds are being used to destroy these buildings that were built between c.1920-c.1950.  While Mayor Andrew “FoFo” Gilich maintains that “Old Biloxi” is important to his administration, his actions are showing otherwise.