Home › Demolition/Abandonment › Greenwood’s Midway Hotel, or How Buildings Fall Down

Greenwood’s Midway Hotel, or How Buildings Fall Down

As we learned last week in the News Round-up, the Greenwood’s Midway Hotel (first built in 1905 as the Kitchell Hotel, enlarged with a north addition in 1916, and later renamed the Weiner) will be demolished.  Inspection by a structural engineer reported the building was “unrepairable” (Delta Daily News, April 19, 2018, “Historic Greenwood Building Suffers Death by Neglect”).  Regular Preservation in Mississippi readers know that failure to maintain a flat roof and prevent moisture damage will sooner or later bring about the structural failure of buildings.  Regular maintenance is needed to ensure drainage is not blocked and moisture barriers need to be replaced or repaired as needed throughout the life of the building.  Greenwood closed off Walthall Street for the block, which leads one to believe someone thinks the building could be in danger of collapse, or at least, falling debris.  Although the road is closed, there are no barriers preventing anyone from walking down the sidewalks, nor any caution signs. 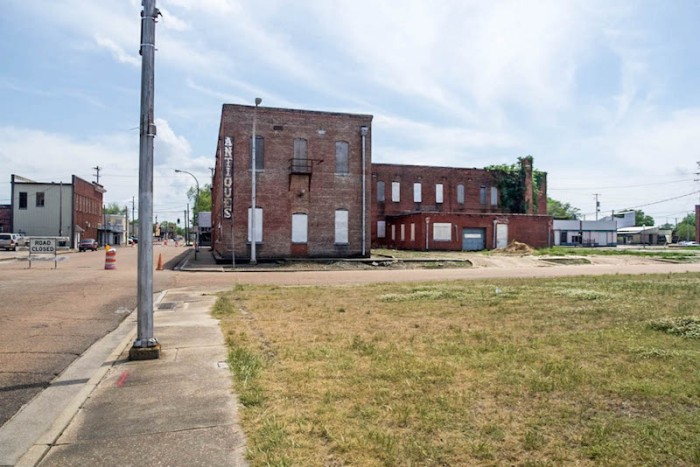 There were no obvious-to-my-eyes bowing of walls, but cracks, spalling, and water damage around window sills and lentils was evident throughout the structure.  Earp’s Barber & Style Shop was still in operation August 2017, but portions of upper floors of the hotel had collapsed onto the lower floor and part of the roof was missing (Historic preservation a challenge, Greenwood Commonwealth, August 6, 2017, p. A01).

The building is currently owned by Larry “Blue” Neal.  In 2015, Neal stated he had owned the building a year and “was being ‘pushed real hard’ by the city” (Greenwood Commonwealth, November 6, 2015, p. A004).  He said he had cleaned up the property, boarded up windows, and was ready to secure second story windows which were “open to the elements.”  At the time, Neal declined to permit the city’s structural engineer to inspect, stating he had his own structural engineer.  The roof had collapsed by then, and the city council had previously voted to secure the building in response to the poor condition of the building.

Interestingly, Neal has attempted to beat long-time Ward 6 city councilman David Jordan three times, running against him again in 2017.  The Midway Hotel is in Ward 6.  Part of Neal’s campaign statement was Greenwood needed

…a councilman who will address the problems of today rather than yesterday. (ad in Greenwood Commonwealth, May 21, 2017, p. A04)

Jordan won his 9th term as Ward 6 city councilman, garnering over 2/3 of the vote to defeat Neal.

Less than 6 months ago, the Commonwealth reported that Neal was looking for funding to create a homeless veterans center in the hotel, according to Brantley Snipes of Main Street Greenwood (Work on vacant downtown buildings continues, November 27, 2017, p. A01). 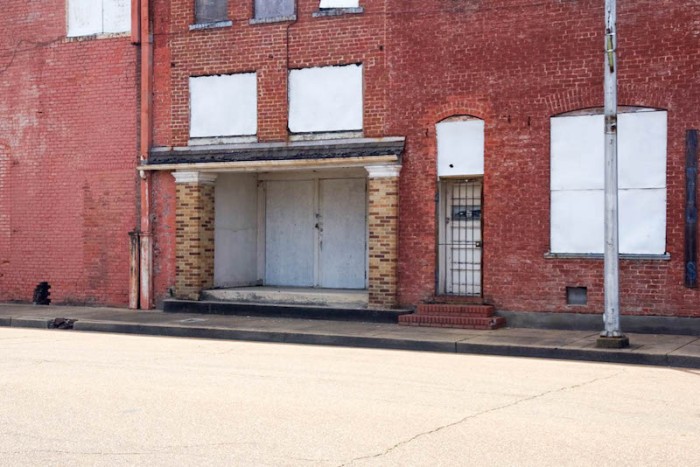 Walking down the sidewalk on Walthall Street, I smelled the dank odor of water/mold/mildew.  Look to the left in the photograph above, and note the dark spot spot at sidewalk level.  The smell was coming from the opening in the wall and probably reflects significant water and moisture penetration.   [Full Disclosure: I am not a structural engineer, nor a professional in building construction or inspection or preservation.  I have, however, spent plenty of time underneath old houses and in cellars, and repaired water/moisture damage to floors and showers because of construction mistakes and improper/neglected maintenance.]  It is just my opinion based on my observation and personal experience that where it smells like that, there is water damage.  There is also that whole no roof/windows previously open to the elements/interior floors collapsed thing going on.

Retracing the history of the decline and imminent (?) fall of the Kitchell/Weiner/Midway Hotel presents a message.  While initially, my intent in visiting the hotel was to just see the place for myself, and then to do a piece on the history of the building, the picture of what has happened here began to shift my perspective.  In the process of looking at the building, trying to really “see” it and the surrounding neighborhood and community and how this building fits into downtown Greenwood, and then researching the newspaper archives from the time of initial construction forward, something else began to emerge.  I have to wonder if it is a similar experience to that which evokes the wrath, anguish, sadness, dismay, anger, frustration, vexation, and/or emotional conflagration that emanates from E. L. Malvaney, W. White, Thomas Rosell, other authors, guest authors, and the many commenters who are professionals in this field.

In 2001, then-owner Russell Cohron, who had owned the Midway since 1978, put the hotel building up for sale.  He stated that the 1917 tile was still in the front lobby, and that the structure was in good shape, with updated sprinklers and wiring.  Businesses still operated in the building.  In 2002, after Cohron sold the building to Glenn and Flo Miller, Will Perkins filmed a movie called “The Midway” at the hotel, and even then according to Perkins, the ceiling was beginning to collapse.  “Original lighting fixtures” were still intact in areas.  Backing up the claim for original lighting fixtures, an article in the Commonwealth reported in 2003, that a 100-year old carbon light bulb sold when the hotel was known as the Kitchell, “still burned” (March 27, 2003, p 21).  The article indicated it was returned to the sellers, the J. D. Lanham Supply Company on Market Street, established 1904, a year prior to the opening of the Kitchell Hotel.  Although the article also stated the hotel “was torn down” they might have just meant “fallen down” as the hotel is still–at least it was on April 25–standing, albeit on a shaky foundation.

So how does a building go from regular use, “in good shape with updated sprinklers and wiring” and within a year, the ceilings are starting to collapse?  The 1985 National Register of Historic Places nomination form for the Central Commercial and Railroad Historic District, which includes the Midway, stated

Demolition activity in the downtown area has focused principally on residential buildings with the result that Greenwood’s relatively intact commercial area is now surrounded, particularly on the east and west, by a wasteland of parking lots and intrusive new construction. (Mary Warren Miller, June 25, 1985)

What was the intended plan?  Who buys property with a collapsed or collapsing roof, ceilings, and floors without a plan for how to use it, either for the benefit of self or others?  Why does one obtain control (and thus, power over the controlled object) and then do nothing that contributes to the well-being of the object, item, person, community, or county? 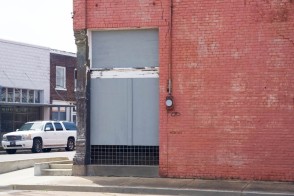 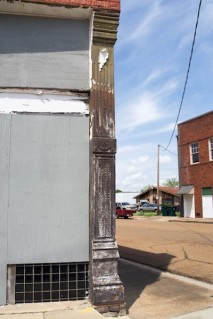 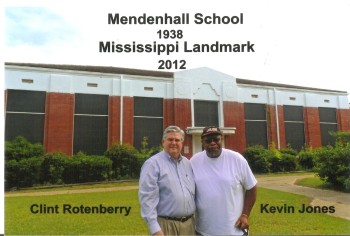 “Because for instance the Meridian Hotel is much older, we feel it’s best to tear it down”