Lets jump right in, feet first to this week’s roundup.

With their second week of good news in a row I am giving the City of Clinton the lead again.  This week the news is the listing of Olde Towne Clinton to the National Register of Historic Places.  The district “comprises a locally significant concentration of residential, commercial, and institutional buildings dating from the 1840s to the mid-1960s.”  Congratulation Clinton!

In Hattiesburg, William Carey University has begun following through on their commitment to demolish the oldest buildings on campus. Last week I received word that the dormitory Johnson Hall was demolished the week of February 6th.  We had previously noted the Lucile Parker Gallery/Tuscan Avenue apartments were demolished.

Johnson Hall was built in 1919 as a dormitory for the Mississippi Women’s College.   Remember folks Demolition ≠ Preservation. Ross Hall and Tatum Court are also slated for demolition by the University.

This week’s good news from Hattiesburg was a piece in the American that stated apartments are still planned for the old Hattiesburg High School.  While this project was first announced over a year ago, the ownership of the school-house was recently transferred to Intervest Corp.  That name might be familiar because this is the company that developed the Old Pascagoula High School in to apartments.  While the Pascagoula project took many years to happen, it did come to fruition and is now an asset to Pascagoula.  I have high hopes that this project will be the same for Hattiesburg.

Sun Herald reported some bad news regarding the 33rd Avenue School in Gulfport.  The stall tactics of the Department of Labor led to stalemate over the future of the historically black 33rd Avenue High School.  Despite the wishes and work of the school;s alumni group, all but the two walls of the school will be demolished.  This plan that will cost the property its designation on the National Register of Historic Places, a sad end for buildings that represent one of the few structures remaining that are of historical significance in Gulfport’s African American community. 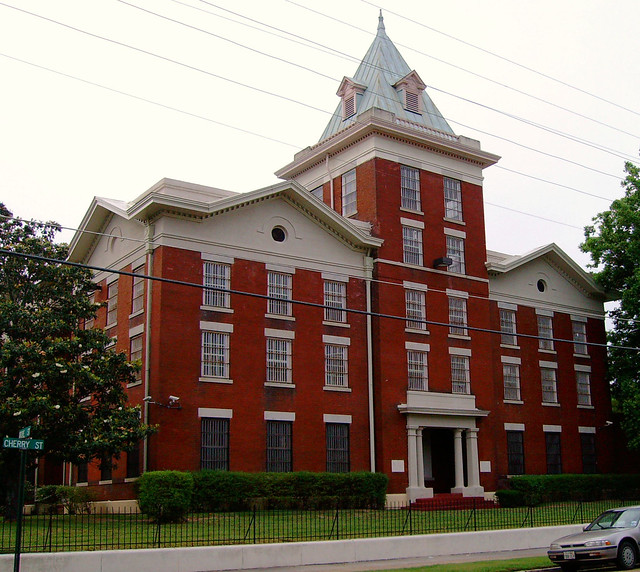 The second story is relating to the possibility of a new jail for Warren County.  There have been several stories about the county needing a new jail, and a new county jail would mean the abandonment of the current 1906-1907 jail that is on Cherry Street in Vicksburg.  I’m all for proper public safety facilities, but I am equally concerned about what might become of the old jail if a new structure were to be built.

Preservation news out of Meridian this week involves residents’ struggles to preserve the city’s historically black buildings.  In a town where all buildings appear to be on the chopping block, structures such as the Wechsler School and the Newell Chapel have an even greater struggle to stay open and standing.

Renovations to Starkville historic Armory, turned City Hall, turned Police Department are back in the news.  A contract with Shafer and Associates Architects was approved by the city for work that includes structural & aesthetic improvements to building.  As part of the Mississippi Landmark review process, MDAH has ask that some barn-type doors that were part of the design for the original structure, be reinstalled on the west side of the building.

Bad news preservation-wise out of Jackson is the demolition of historic homes around the Jackson State University Campus.  22 buildings are being demolished to address blight near the campus in west Jackson.

The JSU Foundation bought up the properties incrementally over four years ago with the intention of building a dorm on the lots, but amid the university’s financial woes, development stalled and the homes were left unattended.

While I don’t know much about this story a quick google street view tour of the area discussed shows several properties had deteriorated quite quickly in the past few years.  It is sad to see because in some cases it appears that had the buildings not been bought by the JSU Foundation they would still be standing and in use.

Good news in Jackson, The Friends of the Mississippi River Basin Model will have a Clean-Up Day for the Model on Sat, Feb 25, 2017 8:00 am – 12:00 pm Buddy Butts Park, 6180 McRaven Rd, Jackson, MS 39209  If you plan to attend please RSVP at https://www.facebook.com/FriendsofMississippiRiverBasinModel to help them get an accurate headcount.

In Columbus, the Mississippi Heritage Trust celebrated its 25th anniversary at the W.  Malvaney covered this in a post last week.  https://misspreservation.com/2017/02/17/happy-25th-mht/

Mississippi’s Senators Thad Cochran & Roger Wicker were co-sponsors to the Historic Tax Credit Improvement Act. This bill makes changes to the current Federal Historic Tax Credit that will encourage building reuse and redevelopment in small, midsize, and rural communities.  Specifically it creates a 30% credit for smaller deals to give rural and non-urban areas the same ability to take advantage of preservation credits, that can often get gobbled up by big urban projects. This small deal credit would be capped at Qualified Rehabilitation Expenses of $2.5 million, changing the credit allowed from $500,000 to $750,000 on the largest projects.   This bill will also allow certain Tax Exempt properties to utilize credits, and increases the building types eligible for credits.  I haven’t read the whole bill but this sounds like it could do a deal of good for rural places that are often difficult to preserve.

Like always I am sure I probably missed some stories, so if you know of any preservation-related news items not mentioned, or if you have more information about a story above please let us know in the comments below.