A couple of weeks ago in the post about outdoor concrete baptistries, “Washed in the Water,” I mentioned that another interesting concrete phenomenon I’ve noticed primarily in African American cemeteries are concrete grave markers. Some are very clearly shaped by hand, while many others seem to have been produced at least in small quantities. But even those identical markers seem to be confined to a single cemetery, or at least I haven’t noticed markers that are identical in more than one cemetery.

Since I started that post with the concrete baptistry at the Bleak House Baptist Church in Wilkinson County, I’ll start this series of posts with the interesting concrete markers from that cemetery. There’s an interesting variety here–several different matching designs, including a flat obelisk in both tall and short editions, an angel motif on an arched-top marker, and a marker dating to 2005, indicating that this tradition has survived into the present or at least until very recently. Maybe that means someone in Wilkinson County can tell us the story of these markers and who created them? As you can see in the background of these pictures and on the Google map below, there’s also a strong tradition here of concrete vault tops that cover the graves, sometimes just outlined with curbs, but often covered with a concrete slab or curved top. 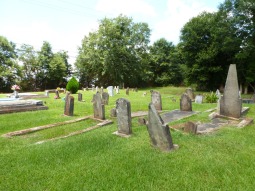