As I write this on this Super Bowl Sunday, I’m afraid I can’t promise a news roundup even close to the breadth of W. White’s January posts, but I do want to thank him for taking over the roundup duty for a while and bringing to the fore many stories that I would have overlooked.

The biggest story of the last week comes from the Natchez Democrat, which chose the scary headline “Section of historic house on endangered list caves in.” The house is Melmont, an 1855 mansion which was listed on the Mississippi Heritage Trust’s 2015 10 Most Endangered List just a few months ago. As the photo in the Democrat shows, the front corner at Melmont has indeed fallen, although when I heard “collapse” I pictured something much more devastating. Luckily, the interior plaster is on wood framing, which appears from the photo in the Democrat to be what is holding up that corner now, but if some structural reinforcement isn’t undertaken soon, this will indeed become a major collapse.

According to the article, stabilization may cost about $200,000:

“The good news is that we had a builder, Ed Lewis, of New Orleans come in with an engineer (Ashton Avegno), and we think it can be preserved,” she said. “It is just going to be very expensive.”

“Masonry buildings are more difficult to fix than a wood-frame building,” she said. “You can’t just take a section out and fix it.”

According to the always-interesting poll in the Democrat sidebar, 58% of readers are “Concerned,” while 42% are “Laughing.” Meanwhile, the comment section meets its minimum requirement of referring at least once to the “Histericals,” which was super funny and witty the first time somebody said it, like 2000 years ago.

The Mississippi Link had a nice article by Natalie Bell about Prentiss Institute, in south-central Mississsippi, “Prentiss Institute alumni going strong.” The Tuskegee-model school for African American students was founded in 1907, and grew over time to include a junior college with a strong enrollment through the 1970s. Unfortunately, enrollment declined after integration, and the campus has been underused for many years, but in recent years, alumni have banded together to preserve what’s left.

A Board of Trustees, comprised of community leaders, alumni and supporters, maintain many of the former school’s buildings and has fashioned the campus, a museum and cultural heritage center.

. . . .Several buildings on the Prentiss Institute campus, including the Rosenwald Building, have been carefully and continuously maintained by the board, which is committed to preserving the landmark campus.

The Rosenwald Building, built in 1927, was recently restored to its original luster with the help of a preservation grant from the Mississippi Department of Archives and History. Built with concrete blocks, handmade by local artisans, the Prentiss Institute Rosenwald Building is one of the soundest, most unique of these storied structures still standing anywhere in the country. It houses an auditorium, classrooms and a museum that chronicles the rich African-American cultural heritage in the town of Prentiss and Jefferson Davis County.

If you get a chance and are in the neighborhood, make sure to visit the campus, on the south side of Prentiss. The Rosenwald building looks great, much better than the “Before” picture above (see an “After” picture at the Mississippi Link website). 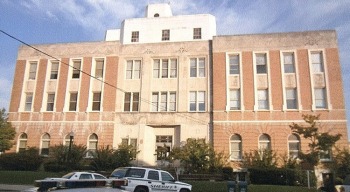 The Meridian Star’s article “More questions than answers on courthouse renovations” . . . well, I’ll just let it speak for itself, but you really should click the link and read the whole article.

The Lauderdale County Board of Supervisors appear to still have more questions than answers when it comes to renovating the albatross that is the courthouse.

Supervisors met Thursday with Eupora architect Belinda Stewart in hopes of learning whether renovating the building or starting  from scratch would be a better option. Such questions have been ongoing for several years.

Stewart presented the board with options on the courthouse, along with four other historic downtown buildings, including the Raymond P. Davis Annex, the Ulmer Building, the Ross Building, as well as the old Greyhound Bus Station. All are on the National Register of Archives and History.

Nothing like referring to a historic building (built in 1905 and remodeled in 1939, according to the MDAH database) that consistently and over a long period of time hasn’t been maintained by its owners, *cough* LAUDERDALE COUNTY SUPERVISORS *cough*, as an “albatross” in the first sentence to set the mood.

And this classic quote, an oldy but a goody:

District 2 Supervisor Wayman Newell reiterated his objections over spending money on renovating the three-floor courthouse, which was built in 1905, and is 63,000 square feet.

“Here we are two years down the road. I’m not putting any new money into that building,” Newell said adamantly. “Once you renovate, you’ve still got an old building.”

Next time, maybe Mr. Newell will use the word “histericals” just for good measure.

Finally, congratulations to The Mill at MSU, a major renovation project of the 1902 Stone textile mill building in Starkville, the 2015 recipient of the Crystal Pineapple Tourism Award.