How about a mid-summer news roundup to catch us up to speed on preservation goings on about the state? 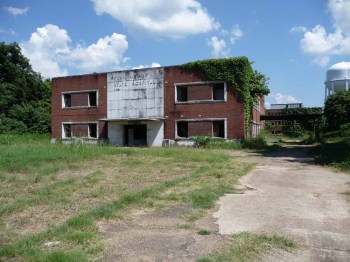 A group of ghost hunters trespassing in Vicksburg’s abandoned Kuhn Hospital discovered a murdered woman’s body on June 28. This story, which involved, well, ghost hunters, murder, Mississippi, and an old abandoned building, not surprisingly made national and international news, including the Detroit Free Press, USA Today, Huffington Post, the UK’s Daily Mail.  The City of Vicksburg has opened condemnation proceedings on the front structure, but possibly not the back 1950s building. The property is reportedly owned by an apparently defunct non-profit.

News reports indicate that the Batesville Elementary School suffered a massive fire Saturday morning. Aerial views show an older 1920s building connected to an 1950s building, but all the images I’ve seen so far only show the 1950s building, so it’s unclear yet whether the older building also was involved in the fire. The two-story 1922 building is designated as a Mississippi Landmark, according to the MDAH Historic Resources Database. If anyone knows anything more, let us know.

Still no word from Lake Washington about how the Mt. Holly fire started or whether the walls can or will be stabilized. 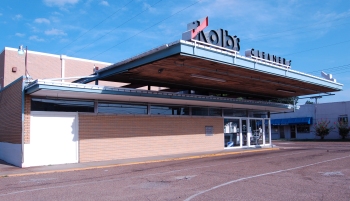 Developers Eldon Development Group and CDA Hospitality released a rendering last week of a proposed new $20 million hotel in Jackson’s downtown Fondren. You may recall stories last year about a hotel on the east side of Duling School, but that project is apparently not moving forward. This latest project is connected to a favorite Modernist building in Fondren, Kolbs Cleaners (designed by Robert Overstreet), and consists of a 9-story Neo-Modernist tower towering over Kolbs at the rear.

Belinda Stewart Architects and the Bolivar County Board of Supervisors recently won a “Best Cultural Heritage Tourism” award from the Mississippi Main Street Association for the restoration of Cleveland’s Amzie Moore House. Moore, a civil rights activist, co-founded the Regional Council of Negro Leadership and was the first president of the Cleveland NAACP. His house hosted Medgar Evers, Fannie Lou Hamer, Martin Luther King Jr., and Thurgood Marshall, among others. The project received funding from MDAH.

The concrete-block and frame gymnasium near the entrance to Historic Jefferson College in Washington, north of Natchez, collapsed in mid-June after years of abandonment, according to the Natchez Democrat. The MDAH Historic Resources Database record indicates the building dates to around 1945.

To end on a bright note, according to MDAH, a $300,000 appropriation from the state legislature will go toward restoring Winterville Mounds, outside of Greenville, to its pre-Columbian appearance. The thousand-year-old mound complex, a National Historic Landmark, is owned and operated by MDAH, but has become somewhat overgrown with trees and invasive brush. These will be “sensitively” removed “to resemble how it would have looked when it was in active use by Native Americans.”