With the holiday this week, and the big news being Ceres Plantation (which Malvaney covered in a single post) I wasn’t sure we were going to get enough news for a round-up this week – but we did.

Starting off with bad news out of Pontotoc where the 1954 sanctuary of Zion Baptist Church suffered major fire damage.  From the story, the cause of the July 4th fire appears to have been lightning and it seems that the sanctuary is a total loss.  I could not find this one in MDAH’s database, so I don’t know much about the building other than the construction date for the sanctuary.  The congregation was preparing for a 175th anniversary this month as well.

Another fire to report on – this time in Greenville.  This one has destroyed St. Joseph High School.  You can see a snippet on the Delta Democrat site and a photo on this facebook page.

News from down in George County – near Lucedale is that the 84 year old Merrill Bridge will be closed (temporarily) after an inspection showed that it was not safe for vehicular traffic.  According to the article, there is oxidation damage to parts of the bridge that will need to be repaired or replace before it can be reopened.  The bridge was designated a Mississippi Landmark in 1993, so all work to be done will have to be okayed by MDAH.

An update on the Spain House in Tupelo where the bid to move the house was approved this week.  I thought that this was done already, so I’m not completely sure how this new story differs from what we included in a previous roundup – but at least it still seems like it’s going to be a win for preservation on this one, so I’m not going to complain.

A story we’ll have to watch in Meridian are the talks Mayor Cheri Berry is going to have with residents of the Poplar Springs Historic District.  This story is a continuation of the dispute over the Dollar General that is planned in the area (which we most recently covered in this roundup).  The talks are supposed to help educate citizens on historic districts.  Poplar Springs is a National Register district, but not protected under any local district ordinance.  Sounds like the plans are going to highlight the differences in these two distinctions and explain how the area can become a local district.  Should be interesting to watch. 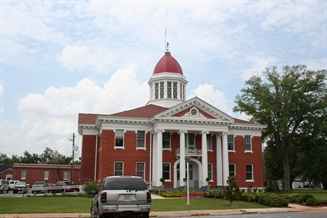 Back to Lucedale where there was a report on the ongoing restoration of the George County Courthouse.  It is entering what the story says is the last phase of the renovation work – which has been going on for several years.  The piece does a nice job of bringing people up to speed on what’s already been done (some of it with grant funding) and what is going to be done.  I also like that George County officials noted to the reporter that they planned on not having grants to help with all the work early on and were setting aside funds to make sure the project could be completed.  That’s some great planning for taking care of an historic building!

An interesting property on Old Canton Road in Jackson might get some new life if the Zoning Commission allows for LeFleur East to use the space for offices and receptions.  The house is the Creekmore House – a 1942 Colonial Revival building and will be on the agenda at the commission’s meeting on July 25.  I don’t know much more about the house (what I found out was what MDAH had in their database) nor do I know more about the plans as the Northside Sun (where I found the article) will only let me read part of it as I’m not one of their subscribers.  Anyone get the print edition and want to weigh in on what the rest of us are missing?

Two snippets to wrap up this week:

A new historic marker went up in Meridian and the American down in Hattiesburg added to their list of “Then and Now” buildings – and it’s a building linked to one of our significant architects.  (If I haven’t said it before, I really love that the American has been doing this series).