Time keeps flying – it’s hard to believe it’s already this late in May.  There’s still some Preservation Month activities before June is upon us – check on the calendar for dates and times.

And here’s the news:

We are going to start with Natchez where I read an editorial from MissPres reader Kathleen Jenkins regarding the planned development at the Forks of the Road site.  This was in response to the story we shared last roundup when the Democrat reported that the developers would “preserve” the artifacts from the site and possibly build a shotgun house.  Besides providing fantastic background into the history, Jenkins asks for more information about how the developers actually plan to preserve the site as the bulldozers prepare it for construction.  We will keep on eye out for more on this issue.

Also in Natchez is a story on the turnover in the City’s Planning Department as both the City Planner and Assistant City Planner are leaving.  The article says that Planner Bob Nix is retiring at the end of June and Assistant Planner Danit Simon was in her last week before taking a position in Pass Christian.  I hope that the commissions planning staff (which include the Historic Preservation Commission) will be able to ride out the transition period – which sounds like it will last until the new mayoral administration takes office.

Interesting news from down in Laurel where Main Street announced the start of a facade grant program which they hope will “encourage investment in the revitalization of the downtown area.”  It’s nice to see a new program like this popping up when so many organizations are still cutting back.  I hope that Laurel Main Street will share stories of successful projects with the local media so everyone can see what a difference even a small investment in a building can make.

Up in Corinth, the Curlee-Verandah House is in the news.  Reports I caught both here and here say that the city (which owns the house) is seeking bids for restoration work on the National Historic Landmark.  Work to be done includes shoring up the foundation, the porch and columns that support the roof.  We will keep an eye/ear out for more on this as the bids come in and, of course, as the work itself is being done. 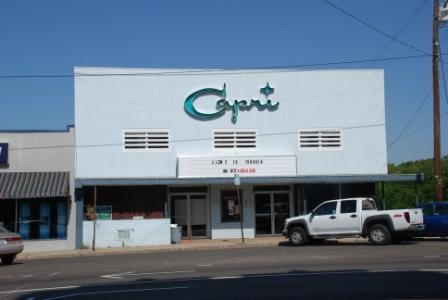 Finally, a story out of Jackson where planning has started for turning the Pix-Capri theater in the Fondren strip into a functioning theater again.  Two stories in the Clarion Ledger (here and here) say that the historic building “is set to reopen as a multi-screen cinema as early as summer 2013” and will “include a bar and restaurant” as well as a parking structure at the rear.  There is also supposed to be a place for a live performance stage in addition to the movie screens.  The fact that there is a plan for the building is great – but I’m a little cautious on being as excited as some about it because I’m not sure how all of this is going to fit into the available space (even if there is a sensitive addition of some sort added to the back).  I would love to see a functioning theater there again, but I hope that it can be done in a way that keeps the historic character of the building and its neighbors on the Strip.