Travelling by Trolley in Mississippi: Vicksburg

Today’s post is Chapter 11 in our series re-printing Frank Brooks’ “Travelling by Trolley in Mississippi: Stories about Streetcars,” originally published in 1983. View other posts in the series at the “Streetcars” tab.

My mother was from a large Vicksburg family, and for that reason, relatives’ tales of the trolleys were standard and frequent. As a child, my mother rode the streetcar to school and back each day, and my uncle soaped the tracks on the hill passing the Bijou Theater many a summer night! Their grandmother and aunts told me about the changeover from mule power to electricity. One of my great great grandfathers even met his death on Washington Street after alighting from a streetcar and stepping into the path of an automobile!

During the 1940s, Vicksburg’s streets were still filled with abandoned trolley tracks peeking through their light asphalt covering; those tracks fascinated me no end. Although I lived 100 miles away, I was a frquent visitor to my great grandmother, my uncle, several great aunts and uncles, and cousins. Because I was in Vicksburg often, I knew the streets where the tracks remained in place. From downtown, we usually pulled our way up the South Street hill between Washington and Cherry Streets as we walked to my great grandmother’s house. The tracks in these blocks were in full view and looked entirely usable to me. From time to time, we enjoyed outings in the park at the end of Drummond Street, and I loved a set of passing tracks out there! Occasionally we went to the graves of relatives at City Cemetery and there remained much evidence of the car line which ran out that way to Walters. I always arrived at and departed from the Illinois Central’s Cherry Street station and the carbarn across the Cherry Street viaduct from the old train shed continued in use as a garage facility for busses during those years. Everything relating to the former streetcar system fascinated me, and I wanted to know as much about it as possible. I made it my business to ask many questions and I received many answers.

VICKSBURG. This transfer had a multiple use. Good in Jackson or Vicksburg. Very practical.

During late December of 1948 I bought a copy of the January, 1949 issue of Railroad Magazine from the newsstand in Meridian’s Union Terminal while waiting to return home after having the braces on my teeth adjusted. Upon boarding the panting train, I was thrilled beyond words when I opened the magazine and discovered an article about a run-away trolley in Vicksburg many years earlier. The story described a calm Sunday morning between 11:00 and 12:00 when a streetcar started down one of Vicksburg’s breathtaking hills at a snail’s pace. I’ve always thought it must have been the Clay Street hill. Quite suddenly, the trolley began picking up speed and the motorman quickly realized that his car was out of control! Using all the strength he could muster, he worked frantically with his handbrake to slow the car, but with no success. Then he frantically turned his controller in reverse, but the current was off and that brought no results. As the speed increased, the front end of the car began to rock and sway, and after another try or two to slow the trolley with the controller, the motorman yelled for all passengers to jump. Within a matter of seconds everyone had left the car. The trolley, unattended, gained speed for four more blocks and then left the rails and careened into another street. the wild streetcar crashed through a thick brick wall into a saloon with the head end of the car coming to rest with its drawbar stick hard and fast into a barrel of fine southern whiskey! Since the car was empty when it struck the building, the only person who lost his life was an unfortunate old man who had been walking down the sidewalk. However, most of the passengers collected plenty of scrapes and bruises from their jump onto the brick street. It was said that every preacher in the city capitalized on that exciting event the next Sunday as their sermons emphasized the fact that nobody would have been hurt in the first place had they been present for the worship services in their churches instead of being out riding on a city streetcar! 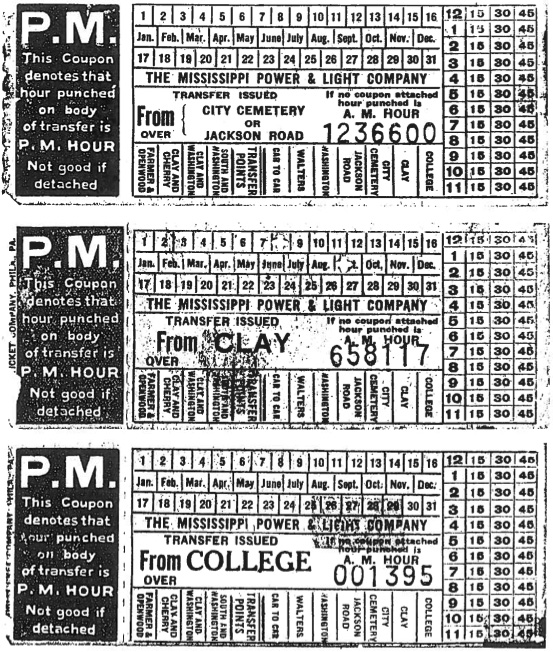 The original company, the Vicksburg Electric Street Railway, opened its first line of eight miles amidst much festivity on April 24, 1899. There was abundant celebrating for a whole week in connection with this event. Not only was the electric streetcar line inaugurated, but a new opera house was opened, and one full day was devoted to decorating the graves of the Confederate dead. However, the streetcar inaugural was, by far, the most prominent event. During the April 21 opening day the trolleys gave free rides to Ken-Caryl Park, where a gigantic barbeque was enjoyed by several thousand persons. The streets were elaborately decorated with flags and bunting, and many bands from both Vicksburg and neighboring towns kept the air filled all day with rousing music. Among the bands, the one from the U.S.S. Nashville occupied the place of special honor.

VICKSBURG. Car 135 competing with a rare Mississippi snow during the 1920 winter.

Several very large arches were constructed over selected streets to give an extra special dimension to the celebration related to the beginning of electric trolley service in Vicksburg. While all the arches were handsome, the ones constructed by the city of Vicksburg, the Illinois Central Railroad, and the Vicksburg Electric Street Railway were noted as being the most attractive. The streetcar company’s arch was crowned with one of the old mule-drawn cars which, until then, had rattled and banged through the city!

Through a series of successive companies, Vicksburg’s electric transit system finally emerged as the Vicksburg Light and Traction Company in 1912. At its peak, the company operated 22 cars on 11.5 miles of track. In 1923, the V.L.&T. Co. came under the control of the Mississippi Power and Light Company, which operated the streetcars until 1939, when they were displaced by the busses of the Vicksburg City Lines, Inc. I was four years old at the time and therefore just missed being able to remember anything at all about the system on a first-hand basis. 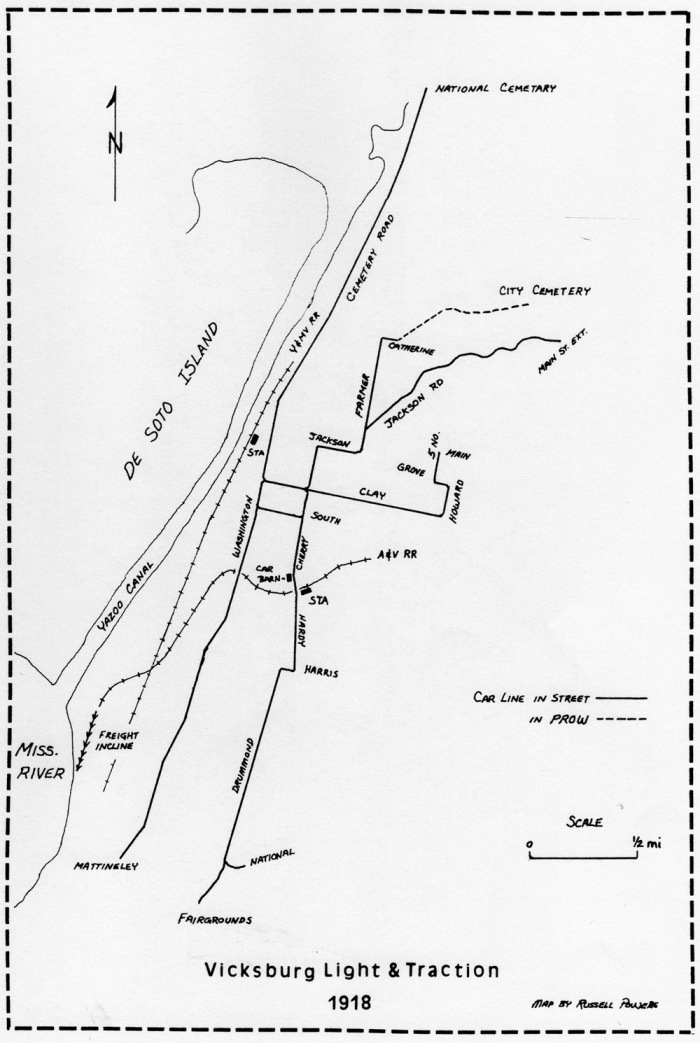 ABOUT THE AUTHOR: Frank A. Brooks, Jr. has loved trains and streetcars for as long as he can remember. He and his wife Jo Anne are parents of 2 children and grandparents of 4. During his active ministry of 43 years in the Presbyterian Church he served in Kentucky, Mississippi, Virginia and Arkansas. In retirement, Dr. and Mrs. Brooks live in her hometown Corinth, MS.