This week’s Roundup makes me feel like I’m in a bad sequel to a previous summer blockbuster film like Jaws: The Revenge.  Okay, so maybe comparing it to one of the worst films ever made exaggerates this week’s news a little, but August has brought some hot topics – and not so great news – to the Magnolia State.  (creepy theme music available here).

We’re going to start with a story that Thomas Rosell noted for us all last week about 33rd Avenue School in Gulfport.  He linked us to the article in the Sun Herald that ran the morning after a meeting that included alumni, local officials and MDAH staff.  A similar story also ran in the Clarion Ledger.  33rd Avenue had been Gulfport’s black high school during segregation, but has since been used for programs like Head Start and Job Corps prior to Katrina.  The property is owned by the Department of Labor, who, it seems, has not done anything to stabilize the building since it sustained roof damage from the storm.  They apparently want to continue using the site for Job Corps, but reusing the school building is not currently in the plan.  From the article, it doesn’t sound like the Department of Labor has even talked with other parties (such as Alumni and MDAH) about the school building itself – at least until last week.  It’s important to note that these groups are not opposed to having a Job Corps location, they just would like to see the old school building incorporated into the site’s use.  It’s a hot issue that might take a while to cool down. 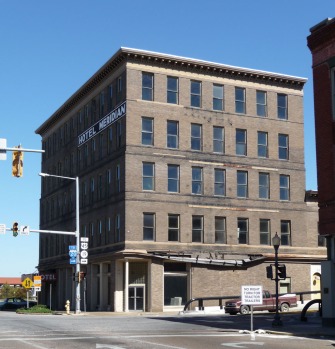 An article out of Meridian this week started with “Whether you see it as an eyesore or a piece of local history, the Meridian Hotel building is coming down to make way for something new.”  This demolition is to make way for the proposed Mississippi Arts and Entertainment Center Museum – even though the plans for the new center haven’t been completed nor have they finished raising funds.  The group has already gotten the demolition permit – and is seeking bids before the work actually begins.  It doesn’t sound like there is anything preservationists can do to save the old Hotel. I guess the only thing we can do is hope this isn’t another huge vacant lot representing yet another project with no money and grand dreams. 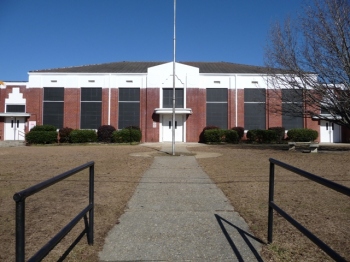 More bad news out of Mendenhall where they are planning on tearing down the old Mendenhall High School Building to “replace it with something more needed.”  Malvaney noted the news of possible abandonment of the school last year in a post with more photos, but I think at that time hoped that the school officials would realize what a great building it was and find a way to re-use it.

According to the WBLT story, the current building (estimated to have been built near the end of the Great Depression), “seems to be a sound” structure that’s “just the just in the wrong shape for what’s needed at the school complex today.”  The story also makes it seem like MDAH approval for demolition is a sure thing, but they don’t actually quote anyone from the department, so there might be a chance for this building?  This is the time where we need to rally local support to save the building – so if anyone in the MissPres world has connections in Mendenhall, now is the time to use them.

In Lumberton, town officials have torn down “long-derelict structures” which “had festered in the heart of downtown” and now are hauling off debris.  The story in the Clarion Ledger calls this a “downtown revitalization project” and reported on the snags of getting a contractor to do the work and stay on schedule.  Unfortunately, we only have the article’s word for the condition of the buildings prior to demolition and the city seems excited to have a “grassy open space” in the middle of its downtown once the debris is cleared (so no current plans for the empty lots).

From Columbus, the Dispatch reports that the local school district is ready to sell Lee Middle School, built in the early 1950s, “but local experts say the property could be on the market quite a while.”  The school has been empty since January when the new Columbus Middle School opened.  While the school is a “choice property” – the current market and the existing school building make it tough real estate to sell.  It doesn’t seem like anyone knows what can be done with the current structure.  It’ll take some creative adaptive reuse ideas – and someone willing to put up some money – to save the building.

Three pieces of good news out of Natchez this past week:

Mayor Jake Middleton plans to request that the old tollbooth colonnades be considered a landmark by MDAH. According to the article, by receiving National Register designation the city can apply for a grant from MDOT’s “enhancement fund” – which will help repair the structure. This might possibly refer to the recently announced CHPG grant round. 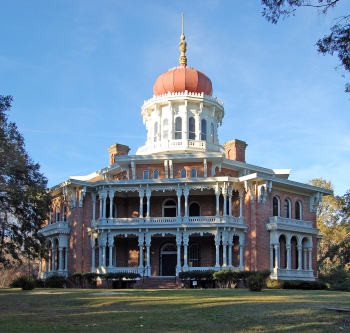 The Democrat also ran a story on Holy Family Church – a recipient of one of MDAH’s Civil Rights Sites grants.  A new roof, plaster repairs and new pews are included in the renovations.

Finally, mark your calendars for the 34th annual Natchez Antiques Forum October 19-22.  The proceeds from this event will go to help with needed repairs to the dome of Longwood.  The article is pretty interesting about how the idea of selling antiques for a fundraiser developed.  Even if they have been doing it for 34 years, it was a new idea to me – and one I think is pretty creative when tied to preservation efforts.

Here’s hoping the next Roundup has better news . . .