The Mysterious Case of the Missing Streetcar Lines

I’ve finally gotten around to reading a book that’s been on my shelf waiting for a while, Crabgrass Frontier by Kenneth T. Jackson. Not a traditional architectural history, the book does explain alot about how American cities and suburbs came to be and to function the way they do. 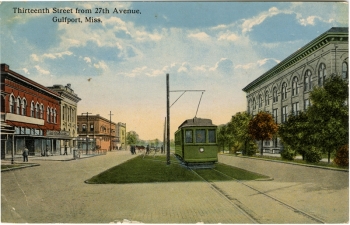 The chapter on streetcars “The Time of the Trolley” especially struck me. I know about streetcars of course, and have heard of various streetcar lines in Jackson, but only in a vague way. I never really thought about all the implications of a trolley line, but Jackson walks us through the workings of these early engines of suburban development:

No invention, however, had a greater impact on the American city between the Civil War and World War I than the visible and noisy streetcar and the tracks that snaked down the broad avenues into undeveloped land. (p. 103)

As with the omnibus and the horsecar, the exclusive right to operate an electric railway line along particular city streets was typically granted by municipal government to private companies in return for certain guarantees of service. (p. 109)

Ok, so now I get how they worked and how they influenced the development of suburban neighborhoods, but how do I figure out where exactly they ran in our Mississippi towns? It seems like it would be easy to find a map showing the lines, but so far, that has been elusive. I know that in Jackson there was a line up North State Street, ending in the small suburb of Fondren, either at the old Asylum (what is now UMC hospital) or at Council Circle, depending on who you talk to. And I suspect there was one going out West Capitol Street toward the Jackson Zoo. Other than that, I have no clues other than the existence of neighborhoods from the early 20th century.

A little internet research tells me at least what cities to focus on. Poor’s Manual documented the various street railroad companies from the 1860s through at least the early 20th century. The 1901 Poor’s Manual gives us this list for Mississippi (click on the image to go to a slightly larger version on GoogleBooks): In addition to Biloxi, Natchez, Jackson, Vicksburg, Meridian, and Greenville, we know from the 1890 Poor’s Manual that the little town of Enterprise had 1.35 miles of track during its heyday. We also know from postcards like these from Gulfport that other cities around the state boasted their own tracks: at least Hattiesburg and Pascagoula. As far as I know, no tracks still exist anywhere. The paper record seems to have also gone underground. Does anyone out there know a good source to tell exactly where the various lines ran, or where the lines in your town were?