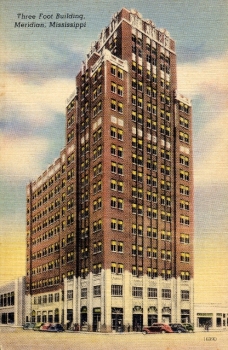 I admit to being especially fascinated by Mississippi architect C.H. Lindsley: he came up apparently without any formal architectural training, designed two of the state’s most prominent skyscrapers when barely 30–the Tower Building (Standard Life) in Jackson and the Threefoot Building in Meridian–left the state during the Depression, moved to the Mississippi Coast in the 1940s, and died in complete obscurity in the 1960s.  He was born in rural Lincoln County, spent his career in Jackson, Houston, Washington DC, and finally Ocean Springs, where only the briefest of death notices marked his passing. Buried in Lakewood Cemetery in Jackson, the most information about his life that I’ve been able to find comes from an obituary back in his hometown newspaper, the Brookhaven Daily-Leader. How could someone who rose from nothing and ascended to the heights of his profession become so completely forgotten by those who still look on his buildings with admiration? It’s a question I ask often, and I still look for clues to the man that was C.H. Lindsley. 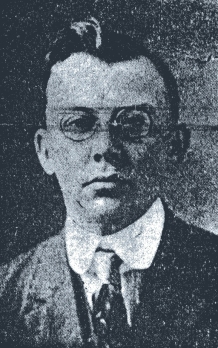 So far, the only picture I know of is found in a Belzoni newspaper of the 1920s hailing the construction of their new courthouse, designed by the firm of Kramer & Lindsley. Lindsley apparently studied architecture as an apprentice with X.A. Kramer, who himself rose up through the trades to become a noted engineer and architect in Magnolia, near Lindsley’s home. Kramer was the state highway engineer in the early 1920s, and became mayor of McComb in 1928, considered at that time to be nearly a millionaire. So I guess Lindsley had a good role model in the art of pulling yourself up by your bootstraps.

The real E.L. Malvaney learned something about architecture while working for Lindsley in the 1920s, after Lindsley had established his own practice.

In addition to his skyscrapers, Lindsley designed a number of architectural landmarks that contribute to the beauty of their communities: in Jackson, the old Central High School (1923), Duling School (1927), the two historic buildings at Belhaven College (1927), the Robert E. Lee Hotel (1930), and Hinds County Courthouse (1930), among others; in Canton, the Sacred Heart Catholic Church (1928); the Crystal Springs High School (1928); the Hugh White House in Columbia (1925); numerous buildings at Alcorn State, Delta State, Mississippi University for Women, Mississippi State, and Fulton Chapel at Ole Miss; and then down on the Coast several modernist schools, including parts of Pascagoula High School (in partnership with Ft. Worth architect Wyatt C. Hedrick).

Clearly, this is a man who had a firm grasp on all manner of architectural styles and construction methods, but maybe he didn’t have the outgoing personality that Overstreet is said to have had. He doesn’t deserve to have died in obscurity, but such are the whims of time. Maybe if he had stayed in Jackson and remained active here, his life would have been celebrated–who knows?

My dream is that some day, ol’ Claude’s drawings, letters, and office records will emerge intact from some dusty attic or forgotten room. But then again, that would take away the mystery–sometimes questions are more fun when they have no easy answers. 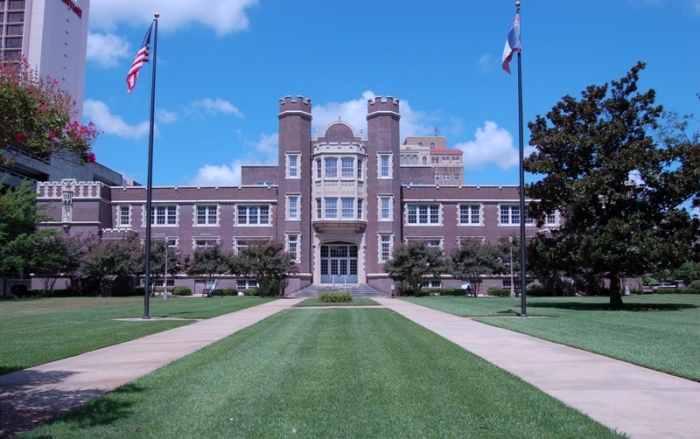