Overstreet’s Plan for the Capitol Complex

I thought this post would be especially interesting when read in light of the three-part article last week, which, if you missed, you can pick up at Part 1 here. 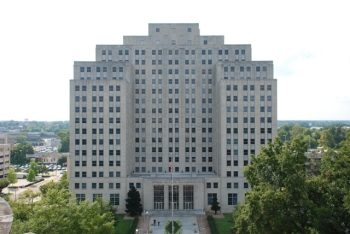 While looking through the N.W. Overstreet subject file at MDAH a while back, I came across a remarkable letter written by Overstreet himself and addressed to “The Members of the State Legislature” on the topic of the “New Proposed State Office Building.” With our ability to look back at the past, we know that this wound up being the Woolfolk State Office Building, completed in 1949 to the designs of a whole passel of architects, led by the principal architect E.L. Malvaney. But this letter is dated January 30, 1946, and so obviously took place before any serious planning had begun, even before the site had been acquired. Overstreet’s letter was accompanied by a site plan (see below and click to view a larger image) he drew to demonstrate his main point, which was that the discussion about locating the office building to the west of the Capitol (where it, in fact, stands today) was going in the wrong direction and that the building should instead be to the north of the Capitol.

It’s a long letter, but I’m re-producing it here because it provides such a wonderful insight into Overstreet’s character, writing style, and eye for design and is one of those rare documents that gives a little peak into the world of the past.

I wish to make comments regarding the above building project, not in the capacity of a professional architect and getting recognition from that standpoint for in that capacity I have not been approached by anyone. As a citizen of the State of Mississippi having been born in the State, educated by the State, and having practiced architecture in the State for 34 years, as a matter of pride I make the following comments for your most careful consideration.

At this date, I understand, you have authorized the State Building Commission to purchase from the Southern Bell Telephone and Telegraph Company a lot located west of the Capitol grounds and across North West Street. To enlarge the site on which the building is to be erected it will be necessary to purchase several more pieces of property envolving the expenditure of hundreds of thousands of dollars more. I am sure that this location as contemplated was carefully considered by members of the State Building Commission who are conscientious, capable business men and trustworthy in every respect. Whether they have had professional advice from expert architects or city planners, I do not know.

As a citizen having a sincere interest in my State with the training and experience of about 40 years in designing and building of the most important buildings in the State and having made studies and designs for a proposed office building several years ago, I wish to state that in my estimation a grave mistake is being made in locating the New State Office at the proposed location, for the following reasons:

1)  It is separated from the Capitol grounds by North West Street, a busy thoroughfare. A tunnel under the street from the Capitol would be very expensive and inconvenient on account of difference of levels of the two buildings necessitates a drop of at least 30 feet.

2)  The rear and west exposure of this property is not very desirable.

3)  Standing on the west side of Capitol grounds you look down at least 25 feet on to this site which will give an effect of the new office building being in a hole.

4)  It’s impossible to place the new building on the axis of the Capitol Building making it a part of the Capitol grounds with a uniform landscaping between the buildings.

6)  This site stands out separated from the Capitol Building. Now we have a separation of offices, some being in the Old Capitol Building. Having three separate locations would make it difficult for a stranger to locate the state department he is seeking. It would be most desirable to house ultimately all state departments possible in one group, using the Old Capitol only for such departments as the ‘History of Archives’, etc. [take that Archives & History!]

Taking into consideration all of the above points against the proposed plan and considering the growth and expansion of the State of Mississippi for the next hundred years and for us to continue to have pride, as we now have for our present Capitol grounds, I believe that the most logical site would be the extending of the beautiful Capitol ground north (at least 1/2 block) from High Street between North West and North President Streets. This gives ample space for future buildings and an open park-like area desirable for a set up of this kind. Eliminate High Street entirely between North West and North President Streets, substituting passage drives through the Capitol grounds or the State court created. On the extended part of grounds build the office building on the axis of and facing the present Capitol building. North or rear of new office building a street should be built between North West and North President Streets giving grade level approach to basement or ground floor of new office building giving lots of parking area around and under same.

Attached hereto is a site plan showing this proposed development.

Someone will say, “Oh, it’s too expensive to purchase this property.” It would probably cost some more than the proposed site but why hesitate if this is the logical one. Recently a well-known marchantile establishment building only a $700,000 building bought a block and a half of more expensive property.

Can High Street be removed? Certainly the City would favor this for they are now interested in making Jackson more beautiful.

I wish to suggest that although the State is in need of an office building but at this time we are facing the most tremendous building program our nation has ever had, the scarcity of material and labor, the excessive cost now existing, that it would be wise to wait several years. Assign the money while you have it for the construction of this building; invest in bonds and draw interest to pay rent and make money by waiting and in the meantime help make possible the building of homes, factories, schools in the State which are urgently needed at present.

Operating cost of a three million dollar building will be as follows:

You are now paying, I understand, for rent outside of Capitol Buildings about the sum of $60,000.00.

Assuring my sincere interest in this undertaking, I am,