According to the National Register nomination, prepared in 1974, Rosemont Plantation was built ca. 1810 by Samuel and Jane Davis when they moved from Fairview, Kentucky to Wilkinson County, Mississippi with a two year old Jefferson Davis. The house is a vernacular Mississippi planter’s cottage with a rather unusual central gable and its finely detailed Palladian window. There is no record of an architect, but the design of Rosemont bears striking resemblance to Oakdale Plantation, a house near Fort Adams in southwest Wilkinson County.   The house was originally called Poplar Grove, but was renamed Rosemont in honor of Jane Cook Davis’ rose gardens.  While Jefferson Davis left Woodville to attend Transylvania College in Lexington, Kentucky, the house remained within the Davis family and their descendants, the Stamps and Farish families until 1895.   In 1895, the property was sold to Henry Johnson, a prominent local planter whose own magnificent Grove Plantation had recently burned to the ground, leaving almost no traces behind.  The Johnson family owned Rosemont until 1971.   In that year, the property was somewhat dilapidated and was purchased by Percival Beacroft of Houston and Freeport, Texas.  Beacroft and Ernesto Caldeira restored Rosemont to the pristine condition we see today. 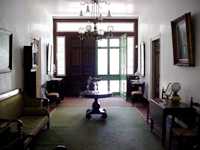 Rosemont’s interior millwork is graceful Federal and Greek Revival period work.  The doors have been treated with a special finish to make the wood appear more expensive than the pine or cypress used for their construction.  High ceilings, tall windows and an almost  refreshing reticence in color define the interior.  Many of the antiques are Davis family pieces which remained in the house throughout or were donated by members of the Davis family.   The grounds and outbuildings have also been restored and a parklike atmosphere pervades throughout.  The Davis family cemetery is on the grounds and offers a peaceful retreat among the towering oaks and poplars above.