After letting its pilgrimage lie fallow for a decade or two, Carrollton decided it was time to open back up last weekend and see who came. I was one of probably 500 or so visitors trying to find a place to park near the courthouse square on Saturday afternoon, and I’m glad I made the drive up on that fine fall day. For $25 ($5 for children), the pilgrimage opened not only the courthouse but also 18 other sites, including 5 churches, 11 private homes, the masonic lodge, and the Merrill Museum. In addition, three sides of the square were closed to traffic to allow for craft and food booths.

I haven’t spent as much time in Carrollton as I should have. The town is a classic 19th-century town that kind of stopped developing around the early 20th century and so reminds us of how many of our now-midsized towns began life. As Elmo Howell notes in his Mississippi Back Roads:

The town survives all of a piece, preserved not restored. When the film crew came for a setting for William Faulkner’s The Reivers, they had only to put a false front on one service station and cover the streets with sand to present intact a 19th century image.

This pilgrimage introduced me to the work of Carrollton’s very own master builder and architect James Clark Harris. Harris (1826-1904) came from either Georgia or South Carolina, apparently brought to Mississippi around 1851 by planter and Choctaw chief Greenwood Leflore. Harris designed and built Leflore’s mansion “Malmaison” which lamentably burned in 1942, only a few years after HABS came through and took these pictures. Harris married Leflore’s daughter in 1855 and spent the rest of his life in Carroll County. Harris designed several notable buildings in Carrollton, including the courthouse–this has just recently been documented from the newspaper record–the Capt. Ray House, “Stanhope,” and Bingham House.

Harris’ work is very idiosyncratic and probably does not derive from any formal architectural education or training. He obviously delighted in brackets and wood carving of all sorts, as his mantles are unique and don’t fit any sort of classical or Greek Revival style that was being preached in the architectural works of the period. He also has an affinity for arches and specifically ogee arches. Here’s an interesting and seemingly characteristic door and window cornice that combines the pediment of the Greek Revival with a flattened ogee arch–bet the architectural taste-makers of the time would have winced to see this, but I think it’s wonderful. 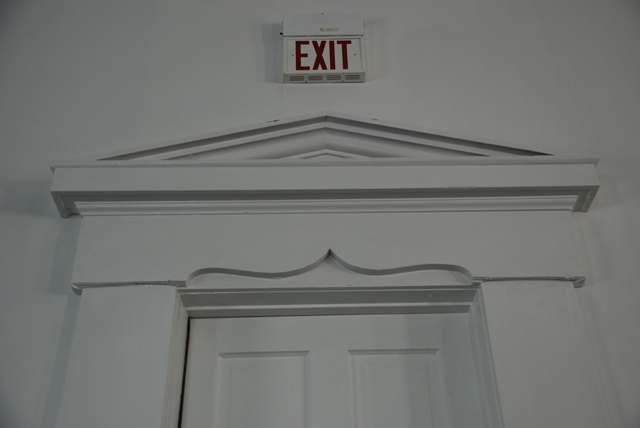 Here’s a little tour of Harris’ work that I saw this weekend:

This visual confection on Stanhope brought to you by James Clark Harris–notice the blocked pattern of the wood siding under the portico. 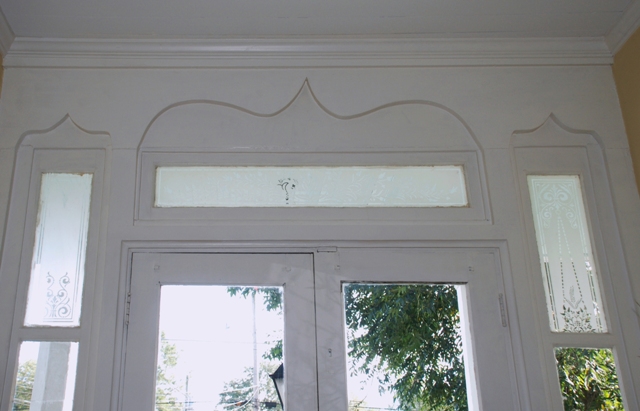 Tomorrow we’ll look at a few more Carrollton treasures opened for us all to see on the pilgrimage. I saw less than half of the properties available, so I am very much hoping that Carrollton will put on at least one more pilgrimage next year before letting everyone rest again.