Abandoned Mississippi: School for the Blind

I know this isn’t a particularly preservationist thing to say, but one of the things I love to do is find abandoned places and explore and take photographs of them. I guess part of it is the thrill of discovery, but another part is the melancholy of being in a place that once was loved and full of life and now is missing its people. I think the producers of Life After People are probably the same way.

Mississippi has lots of abandoned places, maybe not as many as a place like Detroit, but still, the movement of population in our state has created a lot of ghost towns and places bereft of people. It’s the opposite problem in the suburbs of Jackson, where there’s been a huge influx of people in the last 20 or 30 years. Many historic buildings and farmlands have disappeared, replaced by subdivisions purporting to be Arcadian.

Today will be the start of an occasional series called Abandoned Mississippi, and for our inaugural post, the Mississippi School for the Blind:

School for the Blind campus, view from I-55, Jackson

I believe this is the second location of the School for the Blind (the first was located where Baptist Hospital is now), and it was originally a white school–the school for black students was on Capers Drive just north of West Capitol and I believe the campus is still there although used as some sort of detention center. The School for the Blind has now consolidated with the School for the Deaf on the south side of Eastover Drive, leaving this campus on the north side of Eastover Drive pretty much abandoned and deteriorating.

The administration building, out in front of the campus and facing the interstate, was built in 1949, designed by Jackson firm Drummond & Christian in association with Hattiesburg firm Landry, Matthes, Olschner & Associates. The dorms and vocational building to the east of the admin building (you can see one of the dorms to the right in the upper photo) I think were designed by Emmett Hull (the husband of Marie Hull the artist and cousin of E.L. Malvaney) late in his career. I love this campus for its cubist approach–all sorts of intersecting volumes and boxes, and that amazing red brick section on the south end (it houses an indoor pool) with the steel windows wrapping all the way around. It’s so mid-century Modern it can’t help itself–very cool and angular. Unfortunately, I think the developers have big plans for the land once the state sells it to them. Does anyone else love this campus or is it just me?

I don’t usually have good “before” pictures for many of the abandoned buildings I see, but in this case, there’s a wonderful series (Series 2233 for those who simply must know) at the state archives with photos of this school–here’s some to show you what the campus was like when it had its people:

School for the Blind, c.1955: the natatorium (red brick section on south end) 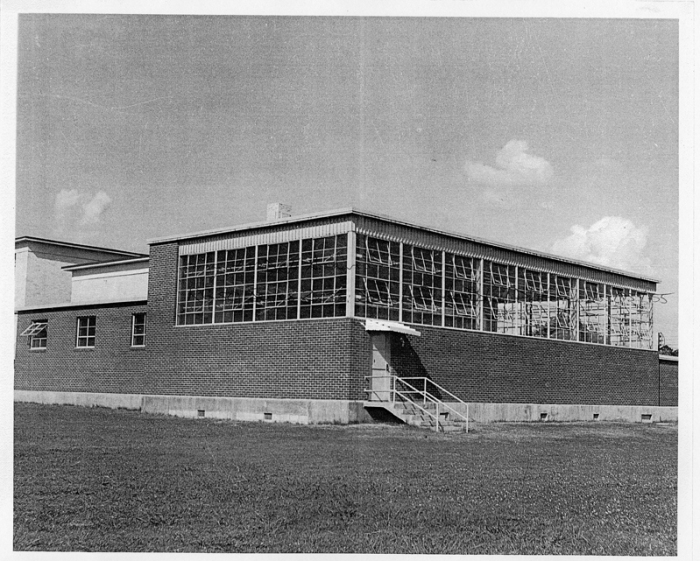 The natatorium when it was new and shiny

Next time you’re flying northbound on I-55, as you come up to the Meadowbrook exit, look over to your right, and give this interesting campus a second look.