1970s Architecture and the Future of Historic Preservation in Mississippi

Three weeks ago, Thomas Rosell’s post “Mississippi’s Best Buildings of 1974” stirred up a substantial amount of conversation on local Mississippi examples of 1970s era architecture. It is eye-opening to many historic preservationists that buildings from this decade will be of the fifty-year National Register age eligibility mark in less than a decade. Considering how understudied and unloved 1970s architecture is, particularly outside of select coastal urban areas, preservationists in Mississippi and elsewhere will have an interesting time deciding what to pursue preservation efforts on.

One idea to consider is that the 1970s were an era of fragmentation. There was not an over-riding style that everyone conformed to during the decade. No style is ever conformed to by everyone, everywhere, at the same time, but the 1970s, with its Brutalism, New Formalism, late Mid-Century Modernism/Corporate Modernism, budding Post-Modernism, and a myriad of more “vernacular” expressions (especially in house design and small town/rural buildings), was an especially fractured time. So, some of the questions that historic preservationists will have to face and at least attempt to answer and define in the coming decade is “What is 1970s architecture, and how do we preserve it (what ever it is)?” This post is not an attempt to answer those questions; after all, it took numerous authors and historic preservationists years to define such styles as Art Deco and Mid-Century Modernism and bring them enough into the public consciousness that some examples would be preserved. This post is about “1970s architecture” coming to an age where it becomes old enough to be considered historic.

I have to admit, the era does not contain a large amount of architecture that I particularly enjoy. In fact, it contains a large amount of architecture that I really dislike. Mid-Century Modernists went for broke on big, bold, often bad ideas throughout the 1950s and 60s, and by the 1970s they were rolling snake eyes, building squat bunkers of banal sprawl indicative of the fact that ingenuity, optimism, and quality had run out just as quickly as oil.

That being said, there are quality, preservation-worthy examples of architecture constructed in every style and era, and I occasionally see Mississippi buildings from the 1970s that are so indicative of their construction era that they should be preserved, several of which I will mention here.

The first is Allen Hall on the Mississippi State University campus. While there is always the chance that the administration has messed it up since I was there earlier in the decade, when I attended it was like walking into 1970. The furniture and vending machines in the lounge, the bolted-down desks and furniture in the classrooms, the doors, the slit-like windows, the vinyl flooring, the 1970s version of executive “opulence” in the President’s Office, all these things preserved like an insect in amber, encased in a large gray and brown box that no amount of crepe myrtles can hide from view. The building is so boldly, offensively, and unapologetically a product of the 1970s and so bold, offensive, and unapologetic in its hatred for its occupants that it really should merit stringent preservation. This is despite the fact that it is so unloved and so poorly regarded that the MDAH HRI does not even list it in the database.

The second is the Copiah County Chancery Complex in Hazlehurst, also known as the W. S. Henley Building, a building that, with its rounded edges, rounded window corners, diagonal wood paneling, and brown and white color scheme, screams at the top of its lungs at its neighbors – a historic courthouse, a historic church, Victorian houses, etc. – that it is from the 1970s, and it does not care how much they hate it. Walking across the parking lot, you see it across the street and think that aliens plopped it down as part of some sort of invasion, a small-town branch office of the main alien invasion headquarters in some big city far away; it is that out-of-place. One has to admire that and in this case, no matter how grudgingly, has to preserve something so unique, even if it probably uniquely bad. It is unknown when the building is constructed and when it would be eligible for the National Register. The MDAH HRI states it dates to c. 1980, which I believe is a few years too late, but online searches failed to turn up the architect, construction date, or much else about the building, other than the fact that it existed in the early 1980s. But, if it only dates to 1980, it will not be eligible for the National Register for over a decade and will probably not last to reach it’s fiftieth birthday intact, not with such a radical design for the area. While I am a great admirer of Classicism and less of an admirer of Modernism, hacking off the modernist elements of this building and replacing them with plastic Corinthian columns and Dryvit veneer is not what I would dub good Classical design.

The Second/”New” Security State Bank (currently a Regions Bank) at 300 East Main Street in Starkville is an excellent local example of New Formalism (Classicist Modernism would be a more descriptive name for the style); but if Brutalism was and is loathed by the public and loved by architectural critics, then New Formalism is its opposite. The style’s greatest proponent, Edward Durell Stone, was one of the architectural profession’s great apostates from the mid-1950s until his death (and after, retaining that reputation to this day). Back in the early days of Preservation in Mississippi, Malvaney gave a great summary of the chapter dealing with Stone in Tom Wolfe’s seminal From Bauhaus to Our House, “From Bauhaus to Our House: Apostates and Post-Modernists.” The New Security State Bank in Starkville is a Modern take on the ancient Greek and Roman temple forms, and, like most New Formalist buildings, is far better proportioned with a higher degree of care and craftsmanship than later Post-Modern and other nominally “Classicist” buildings because most New Formalist buildings were designed by architects utilizing the rigorous Beaux Arts training they had earlier rebelled against. Banks seem to be an especially common building type for New Formalist designs; traditional bankers and the public could have columns, marble, and a sense of permanence and stability (essential for a bank) while still being modern and new. The New Security State Bank is more traditional than some other New Formalist banks as it continues the traditional urban streetwall at the busiest intersection in downtown Starkville while placing its parking and drive-thru in back, making the building fit far better into downtown than, say, its mostly windowless, bunker-like, gray, concrete, Brutalist neighboring bank across the street. The New Security State Bank is included in the National Register-listed Downtown Starkville Historic District but is classified as a non-contributing resource due to its age, dating from 1972, a decade away from the fifty year mark when David Preziosi prepared the National Register Registration Form in 2012.

A fourth and final building for this post, far more well-known and far more acclaimed than the three previous examples, is the Chris Risher, Sr. designed Meridian Police Station. All of Risher’s modernist buildings carry a certain cachet, and this one is no different. In 1977, the Mississippi Chapter of the AIA awarded Risher two Honor Citations, one of which was for the Meridian Police Station, which was completed that year. The building is considered one of the best modernist structures in Mississippi and as the pinnacle of Risher’s career. After a demolition threat from the City of Meridian, the MDAH Board of Trustees designated it a Mississippi Landmark on September 22, 2015, giving it some protection from demolition. That makes it, unless I am mistaken, the only Mississippi building from the 1970s that has any form of historic recognition and preservation protection. Since its Mississippi Landmark designation and accompanying $300,000 Community Heritage Preservation Grant for a new roof (which was unanimously rejected by a Meridian City Council still emphatic in its desire to demolish the building), there has not been much news about the building, and it still sits empty. Many posts on this site have concerned the Meridian Police Station, for those interested I would recommend “Chris Risher’s Meridian Police Station Under Threat,” “To Preserve and Protect,” “Chris Risher’s Meridian Police Station Honor Citation,” and “Meridian, You’re Blowing My Mind!.” 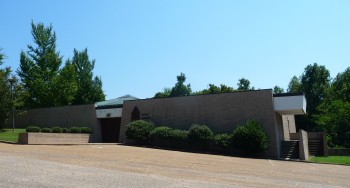 The above examples are not the only ones worthy of preservation from this understudied era, and different people will have different suggestions about which buildings should be preserved, with debates occurring over what should be preserved, why should it be preserved, and how the general public can be convinced that it should be preserved. For instance, are Gunnar Birkerts’s utopian Brutalist buildings at Tougaloo College worth preserving? What about Paul Rudolph’s much remuddled Fredella Village Apartments in Vicksburg, which “celebrated” their fiftieth birthday in December and consequently became eligible for the National Register. What about buildings not designed by out-of-state Starchitects such as Godfrey, Bassett, Pitts & Tuminello’s 1970 Temple Anshe Chesed in Vicksburg? How about the coastal houses of Carroll Ishee; which ones should be preserved and what is the best way to ensure their preservation?

I once made the suggestion on this site that, “Why don’t we create our own Mississippi list of 101 ‘Buildings You Must See Before You Die.'” The worst suggestion EVER made in the history of Preservation in Mississippi based on the number and intensity of the headaches it caused, but it generated a great deal of thought and comments (just shy of 250) about what Mississippi buildings the state would be much poorer place without. I swore to Malvaney not to make any wonderful suggestions like that again but here comes another suggestion. In the comments section of this post, perhaps start that conversation about which buildings that have just reached or are within a decade from National Register eligibility should be preserved by leaving comments suggesting and debating what buildings constructed from c.1965 to c.1978 you believe are worthy of preservation.