Today’s post arises from both an interest in the Industrial Mississippi posts, but also the Friday is a Gas Series.  I was curious if any motor vehicles had been produced in Mississippi, then I recalled a friend who had worked for General Motors at the Delco Remy plant in Meridian, Mississippi in the 1970s.  I vaguely remembered that the plant made alternators but that was about it.  After a quick phone call to my friend, I had a bit more information to begin my internet sleuthing.  After coming across the wonderful site delcoremyhistory.com I learned more about these plants that were manufacturing automotive starting motors, and turn signals.  In addition to the plant in Meridian, there was a Delco Remy plant in Laurel, Mississippi.

“According to a Heavy Duty Remanufactured Starting Motor and Alternator Brochure dated 1981 Plant 28 in Laurel, MS was built specifically for the remanufacturing of Heavy Duty Motors and contained 200,000 square feet.”

A 1995 Land and Buildings manual produced by Delco Remy that has photos and floor plans indicates that the building had been unaltered as of that time, so the north and south additions were added after Delco Remy ceased operations in 1994.  The plant in Meridian was started a year earlier and was operated by Remy International for a few years after GM sold the company to private investors.

“This was originally [built as] a National Homes plant and was purchased for the production of 5MT starting motors and later built permanent magnet gear reduction cranking motors.  It also had a powdered metal forge which when it left DR in 1994 was processing over 17 million pounds of powdered metal.  Remy International operated the facility until February 27, 1998 and moved the production back to its new South Anderson Plant.”

The 1995 Land and Buildings manual produced by  Delco Remy that has photos and floor plans indicates that the building built in 1975 had received an addition in 1979.  The aerial image provided by Google shows that an addition has been made to the east side of the building after 1995.  A Water Treatment Building is still standing, but the Training Building out front has been demolished.

General Motors had two plants in Clinton, and another in Brookhaven during the same time.  Does anyone recall where those plants were and what they manufactured? 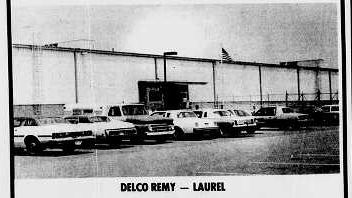 How did MissPres get its start? Are you sentimental enough to be a preservationist? Who is E.L. Malvaney? Find the answers at "To Be Or Not To Be, That Was the Question."
Join 2,456 other subscribers