The Sunflower Agricultural High School in Moorhead was PWA project W1176, approved November 1936 with a $45,000 grant toward the estimated cost of $100,000.  Construction began January 27, 1937 and was completed September 9, 1937 for a total of $100,298 (Federal Emergency Administration of Public Works Projects Division, p. 105, January 3, 1940).  The Historic Resources Inventory (maintained by the Mississippi Department of Archives and History, and hands down, the best historic resource in the surrounding states of Alabama, Louisiana, Tennessee, and Arkansas) documents architect Edgar Lucian Malvaney and M. T. Reed Construction as the architect and contractor, respectively.

The general contracts for a new high school building, girls dormitory, and gymnasium, were let to M. T. Reed Construction Company of Belzoni, Mississippi.  Plumbing and heating contract went to Paine Heating and Tile Company of Jackson.  E. L. Malvaney of Jackson has been selected as architect.  The construction work will begin not later than January 25.

I was able to locate the 1939 annual–The Retrospect–for SAHS in an archive, and the stunning reproduction of E. L. Malvaney’s architectural rendering of the proposed school. 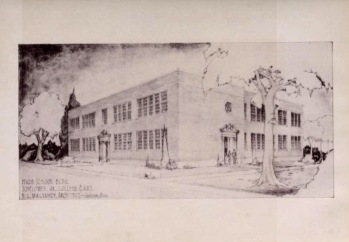 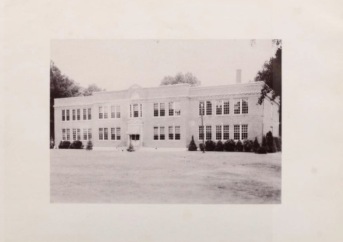 From Public Buildings: A Survey of Architecture of Projects Constructed by Federal and Other Governmental Bodies Between the Years 1933 and 1939 with the Assistance of the Public Works Administration, 1939, C. W. Short and R. Stanley-Brown, United States Government Printing Office Washington:

Region No. 3. Virginia, North Carolina, South Carolina, Georgia, Florida, Alabama, Mississippi, Tennessee, and Kentucky are in this region…Traditional architecture of the Colonial period still dominates design here, except in Florida and the Gulf coasts of Alabama and Mississippi where some Spanish influence lingers and where “modern” design has crept in.  With the exception of some noteworthy buildings, this area has not contributed much improvement in design.  The best work has been done in Florida and Mississippi. (Chapter V, Design, p. 12)

The Sunflower AHS was not one of those “noteworthy buildings” (Columbia High School, Bailey Junior High School, and Meridian High School took those honors for Mississippi), but I think plenty of Edgar Lucian Malvaney’s designs are noteworthy and likely belong in that “best work” done in Mississippi.

What is your favorite Edgar Lucian Malvaney building?