Firefighters gather at the scene of a building collapse in McComb on Sunday evening. Matt Williamson | Enterprise-Journal

The lead story this week is the partial collapse of McComb’s downtown theater.  While it looks bad, hopefully an engineer with an understanding of historic buildings can be brought in to give a structural assessment.  The current state of the structure somewhat reminds me of the old Hattiesburg High School after it was severely damaged by arson in 2005.  Hopefully those involved with the building can find inspiration from other buildings restored after a disaster.

In Hattiesburg, the South Mississippi Genealogical History Society is moving to new location in a rehabbed house at 307 Second Avenue, but a historic house adjacent will be demolished for parking.  I wish the Society would work to restore the house instead of demolishing it. 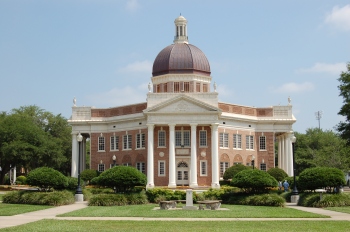 Staying in Hattiesburg, the replacement of terra cotta on USM’s Lucas Administration building should be complete by October, 2017.  Poor maintenance of an interior downspout caused moisture infiltration into the terra cotta pieces, causing some of those pieces to expand and contract and crack.  If we’ve learned anything this week, folks, it’s to keep after your downspouts.

In Bay St. Louis a large hotel will soon be built in the Beach Boulevard historic district.  Plans have gone before the Bay’s Historic Preservation Commission at their July 10th meeting and received preliminary approval.  Commission member Ed Wikoff said, “We expect to see additional detail in future reviews as progress is made on the design.”

In West Point, the National West Point Alumni Inc., is sponsoring a fundraiser supper on July 28th for the restoration of the former Northside Elementary School.  Built in 1946, according to the article it was the first high school for African-Americans in West Point.  Tickets are being sold by NWPAI members for $8.

In Tupelo, we have another update on the Lawhon Elementary School renovation.  Apparently Elvis hasn’t left the building, as the renovation gives a glimpse historic fabric of Presley’s early years. 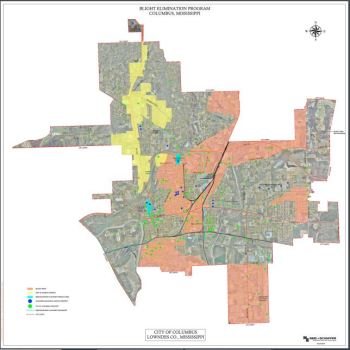 The city of Columbus is seeking $500,000 in grant funds to demolish houses.  The areas identified as blighted are quite large and include some areas adjacent to existing historic districts.  Wouldn’t we all like to see this money put to better use, say maybe helping the owners fix these houses up?

Staying in Columbus, a house built by and for freed slaves for sale.  According to the Columbus Dispatch,

The Haven, on Second Avenue North, is one of the city’s oldest houses. It was the home of freed slaves Thomas and Isaac Williams in the 1840s. It’s the only known house in Columbus commissioned by and for freedmen in pre-Civil War Columbus….The home is a raised cottage with a wooden frame built atop a brick basement, a style that would have been found along the South Carolina coast.

Advertisement in the Jackson Clarion-Ledger, June 30, 1946.

More demolition at public expense is on the way in the city of Jackson, where Revitalize Mississippi and the secretary of state’s office have teamed up to demolish vacant houses.  While some houses are rehabbed and turned into rental properties as part of the Revitalize Mississippi program, others are demolished.  As part of the press conference announcing the project, a house was demolished.  The house at 3121 Sears Avenue is part of the neighborhood identified earlier this year in a post about housing marketed to African-American veterans of World War II.  “Mid-Century Mississippi: Homes for Colored Veterans”.  I know I’m growing weary, and I’m sure y’all are too, about the misguided thought that we can just demolish our way out of a blight problem.

The National Park Service has released an updated version of the Secretary of the Interiors Standards.  These guidelines have been updated and expanded to address the treatment of these buildings constructed with newer materials and systems from the mid- and late-20th century. Plus, a section on exterior additions to historic buildings in the Rehabilitation Guidelines has been broadened to address related new construction on a building site, and a section on code-required work is now included in all of the chapters, among other updates. This will make a great addition to every preservationist’s bookshelf, especially those of you serving on local historic preservation commissions! 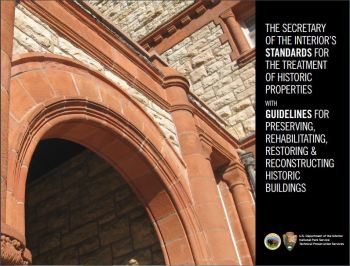 The Standards are available in PDF format online: https://www.nps.gov/tps/standards/treatment-guidelines-2017.pdf

Preservation Action, the historic preservation lobby group provided an update to the federal budget negotiations for the Historic Preservation Funds.    Here’s the breakdown.

This isn’t much change from before it went to for full committee markup.