This is our last round-up for March.  It’s hard to believe that we are about to enter the second quarter of 2017 already. Let’s jump right on in to this week’s roundup.

Since our last news round-up, MDAH has hosted another preservation workshop, this time in Hattiesburg on 3/21. There is still one more workshop scheduled to be held in Greenville this Wednesday, 3/29. Topics of each of the four sessions might vary slightly but each workshop generally covers:

The Architecture History Section is hitting the road in March for our regional training sessions in Biloxi, Starkville, Hattiesburg, and Greenville. All sessions are free and open to the public. For more information and to sign up, follow the links! Thanks so much to our local Historic Preservation Commission/Certified Local Government and Main Street partners for helping us come to your communities.
Greenville 3/29/2017
http://www.signupgenius.com/go/20f0945aea928a3f94-greenville

If this sounds of interest to you this is your last opportunity so be sure to sign up! 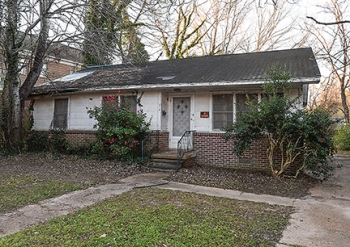 A house, located at 714 University Avenue in Oxford, Miss. on Tuesday, March 21, 2017, has been approved for demolition by the Historic Preservation Commission.

In Oxford the Historic Preservation Commission approved the demolition of a c.1955 mid-century ranch house at 714 University Avenue.  This structure is outside the boundaries of the nearby South Lamar National Register Historic District but it is located in Oxford’s local South Lamar Historic zoning District.  The local ordinance, written back in 2007, states that the local districts intent is to…

“…promote the preservation of its important collection of residential architecture, constructed during the period of ca. 1840 to 1950; the district has notable structures with architectural and historical significance on the national and state-wide level and the district is more important on the local level for its ability to represent broader themes of significance in eras of economic prosperity, of development and redevelopment, and of changing periods of architectural fashion.”

It could be argued that this building is only being demolished rather than restored because its architectural fashion is out of style at the moment in Oxford, and it doesn’t sound like this structure will be around when the mid-century aesthetic does come back into favor.  Might be time to consider revisiting the ordinance with the goal of protecting mid-century resources that are well beyond the 50 year mark?

In other Oxford news the Board of Aldermen authorized an appointment to the city’s Historic Preservation Commission.  The Local Voice article didn’t go into any detail so maybe someone from that neck of the woods can fill us in on the details.

In Tupelo, a historic Tudor Revival style house on the corner of Main and Stone Streets was damaged when a vehicle left the road and crashed into the side of the structure.  The former house now serves as a daycare. Fortunately no children were injured in the accident, but the driver was taken to the hospital with serious but not life-threatening injuries.  Let’s all remember to slow down out there on the roads and especially to avoid running into historic buildings.

A University of Missouri professor from Columbus, Mississippi is working to preserve a collection of pictures of his hometown.  The collection contains many interesting photographs of buildings.

The Kemper County Messenger reports that the Kemper County Board of Supervisors authorized demolition of Victorian style house to the east of Kemper County Courthouse in DeKalb “because it is of no value to the county.” The article did not report if the Supervisors tried to find a better use for the house rather than just demolishing it. Surely there would have been someone interested in buying the house.  This house is one of the oldest standing structures on the Kemper County courthouse square.

In Jackson, the Selby & Richard McRae Foundation is providing Millsaps College with a $4 million gift to be used to renovation the Christian Center.  The renovation will establish new classrooms and office space for the Humanities division.  The work will also include a new 175-seat lecture hall and a new chapel, but it isn’t clear if this is in the existing building or as part of an addition.  Work is expected to begin on the 1950 N.W. Overstreet & Associates Colonial Revival style design during the 2017-2018 academic year.

At the Vicksburg Main Street annual meeting it was reported that in downtown Vicksburg during 2016, 20 buildings underwent renovations.

A new bank branch adds to the excitement of downtown Laurel’s revival.  The Magnolia State Bank out of Bay Springs has opened a location in the former Efirds Department Store, built in 1930.  In the spirit of opening their new branch in a historic structure hopefully someday the bank will consider some preservation tax credits for new historically appropriate windows.

Down on the coast, in Gautier a historic 1922 log house is being moved from near the Highway 57 exit to Shepard State Park.  MissPres first featured this story back in a January round-up, but last week the Sun Herald noted that the house was on the move.  You’ll remember this house was moved once already back in the late 1980’s- early 1990’s from the Orange Grove area of Gulfport.  I am looking forward to checking out the unique craftsman style house once it opens to the public at Shepard State Park.  If you follow the Sun Herald link you can watch a video of the house being moved. 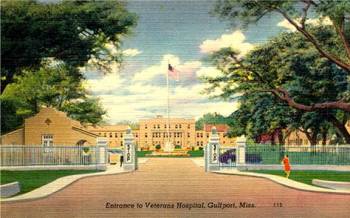 Staying down on the coast, this week is the start of Mississippi’s Bicentennial celebrations.  This week from March 31 to April 1 the former Gulfport VA will be the site of the festivities.  The complex of Spanish Revival style buildings alone is worth a trip if you’ve never had a chance to walk the grounds.  Plus there will be a concert and lots of other Bicentennial related activities as well.

Pilgrimages are already underway in Natchez and Vicksburg, as is the annual azalea festival in McComb. Pilgrimages in Aberdeen, Columbus, and a cemetery tour in Port Gibson are all set to begin this week.  Also this Thursday, March 30, from 5:30pm – 7:00pm is Lakeport Legacies: Building Delta Plantations.  Just across the river at Lakeport Plantation in Lake Village, Arkansas Blake Wintory will be presenting “Connecting Washington County, Mississippi and Chicot County, Arkansas,” about the connections leading to the architectural similarities between Belmont, Willoughby, and Lakeport plantations.

Follow the links below to see what’s going on in your neck of the woods.  Attending events like these is a great way to support local grassroots preservation efforts.

Like always, I probably missed a story or two, so if you know of any preservation-related news items not mentioned, or if you have more information about a story above please let us know in the comments below.