As you read today’s post, the third in a four-part series celebrating Preservation in Mississippi’s 8th birthday, remember that this article, “Repair of and Changes in the Old Capitol,” was written by A.S. Coody in 1949. This section of the article describes in the great detail what the Old Capitol looked like, its layout and materials, in 1916, when the massive renovation under architect Theodore Link to convert the building to a state office building began. You’ll notice that Coody uses the past tense a lot. His description is easy for us to visualize, but if we were reading this in 1949, it wouldn’t have been so easy because the Old Capitol’s interior had been gutted and rebuilt in 1916-1917, as you will read. As he describes the wonderful curving staircase in the front foyer, remember that this was completely gone in 1949, removed in favor of a grand staircase in the back semicircular apse, and the Senate and House chambers had been cut up into two stories of office space. As we saw in W.S. Hull’s 1909 renovation of the Governor’s Mansion in which he took out the original staircase and inserted a new grander staircase, preservation at this time meant saving the building, not necessarily saving its interior. In thinking more about this as a “preservation project,” I’m curious if the Old Capitol represents Theodore Link’s first project as what would now be called a “preservation architect”?

Today, thanks to the work of the 1958-1960 “Old Capitol Restoration” that changed the building from state offices to the state’s first state historical museum, and to the later work after Hurricane Katrina, we can easily visualize the spaces and architectural features that Coody describes because they have been carefully reconstructed. But those are stories for another day.

If you’re just joining us, read Part 1 and Part 2 and then pick up here.

As before, I’ve inserted scary photos by T.F. Laist of the interior of the Old Capitol in 1915.

THE WORK OF REPAIR 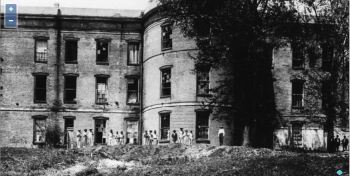 This remarkable photo, c.1916, in the MDAH Daniels collection shows convicts at the back of the Old Capitol. The photo at the MDAH Al Fred Daniel Collection shows the stripes on the convicts pants.

The plans for repair and restoration were undertaken promptly after the 1916 session of the Legislature adjourned. Mr. Link made a complete survey of the building and from this the design of the structural steel was made, and the contract awarded to the American Bridge Company of Pittsburgh, Pennsylvania. This was all made and delivered early in September. The design and measurements were so carefully made that no changes or alterations were required on the steel framework. All the holes were fitted for rivets, and not an error was made.

Some convicts were assigned to the work in the spring of 1916, and the first task was to construct cages, cooking and dining quarters, and other essentials for a camp for 50 or 60 men. The grounds had to be fenced to prevent escapes, and quarters provided for the guards and the sergeant in charge. A building was also constructed to house the furniture remaining in the building.

A large task was the boxing and removal of the old records. These were placed in the basement under the east end of the New Capitol. There were literally tons of these records, dating from  territorial days, and consisting of everything from letters to assessment rolls.

The next step was the removal of the old furniture, formerly used by state officials. This furniture was of walnut, well constructed, and some of it nicely carved. Most of the pieces were tables and “secretaries” of the pre-war period. The furniture was stored in a temporary building, and some of the pieces were repaired and assigned to state departments. The filing cabinets were merely drawers and “pigeon holes,” and these were thrown out as rubbish. Most of the drawers had inside dimensions about 12 x 12 x 4 inches.

The building as originally completed had three floors. The first floor contained offices for the state officials; the second the senate and house chambers, with some offices, and the state library in the bay at the rear; the third floor contained senate and house galleries and committee rooms. There was no balcony in the dome at the third floor, and to go from one end to the other it was necessary to go down stairs to the second floor and up another flights of stairs to the third floor.

The Governor’s office was in the southwest corner, the Secretary of State across the hall, the Treasurer in the northeast wing and the State Auditor in the northwest wing. In later years the Supreme Court used the rear bay on the second floor and the library the first floor.

On “the first story,” or second floor, space was assigned as follows:

On “the second story,” or third floor, space was assigned as follows:

No mention is made of the Senate and House galleries, which were small, and extended around the open well, or space, above the senate and house floors to the ceiling.

In later years new offices were created, and this required changes in the office assignment. New officers included a state superintendent of education, land commissioner, commissioner of insurance, revenue agent, and railroad commission.

The construction of the old capitol was relatively simple. The dome was almost an independent structure in the center of the building. It rested on its own foundation and the wall was of brick, about 18 inches thick, rising above the roof. On this was a wood structure, covered with copper, and above the main structure was a smaller dome, also covered with copper, and surmounted by a carved wood ornament, the top being a magnolia bloom, carved out of cypress. [has anyone ever seen a picture of this?]

In the entrance there was a spiral staircase, on each side. The rails were carved walnut with handsome newels and balusters. Similar double stairways went from the second to the third story. 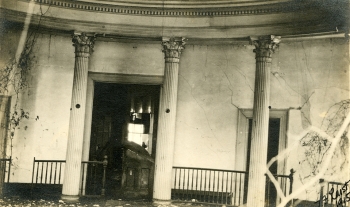 Senate Chamber, with view to north into main hallway. Photo by T.F. Laist. Original photo at Mississippi Department of Archives and History.

The senate chamber, or “saloon,” was surrounded with beautiful, fluted Corinthian columns, with capitols of hand carved wood. The house chamber had cast iron columns to support the gallery. As I remember they were about six inches in diameter, with iron capitals. The speaker’s dais had steps on the sides, and at the rear were four Ionic columns, which are now (1949) in the original position. These, with the six columns in front, were copied from columns in the Greek Erechtheum, and are of the same dimensions. These ten columns are the actual columns installed when the capitol was built.

The partitions running north and south on each side of the corridor were of brick, and extended to the third floor, except for the House and Senate chambers.

The partitions, and the outer walls carried the weight of the floors, and the roof. Wood joists were set into the side walls and into the north and south partitions. Above the third floor, the wood joists were long enough to reach across from the east wall to the west wall, a distance of about 60 or 70 feet. These joists were magnificent timbers, as I recall, 6 x 12 inches, of yellow pine. When the building was repaired these joists were sawed into boards, and used for window frames in the building as it now stands.

The roof was supported by wood rafters, resting on the outer walls, and long enough to form a single unit. The weight of the roof tended to exert an outward pressure where the rafters rested in the walls and this seriously damaged the walls. This defect caused the examining architect to report that the walls were beyond repair.

The interior architecture, such as pilasters, cornices and trims were all copied from the Greek, without claim of originality. The interior of the dome and the first floor corridor are excellent examples of interior work, and are restored to the original design, except the floors. The corridor floors were wood, and the floor under the dome was stone flagging. The electric lights in the four niches were added. The statue of Jefferson Davis was removed from the Confederate Monument in the Park, south of the building, to the dome floor, by Act of the Legislature, some years after the old building was repaired. [After Hurricane Katrina, Jefferson Davis was returned to the Confederate Monument, where he now receives visitors from behind a thick lexan door.]

The doors and door frames on the first floor corridor are the actual doors and frames originally placed there. These were carefully removed, and when the repair work was nearing completion the doors and frames were restored to their original place. New hardware was used. One of the convicts furnished by the penitentiary was an expert cabinet maker and he did the repairs to the doors and door frames. Where broken and scarred, the space was cut out, a piece of wood fitted and glued in and polished. Some of the lintels are likewise repaired.

This is the third in a series about the 1916-17 renovation of the Old Capitol. Want to read the rest?