If you’ve been around MissPres for a while, you’ve know we’re big fans of “McAlester’s Field Guide” or more properly A Field Guide to American Houses. This was originally published in 1984, and I wore my paperback copy out by the time the updated and vastly expanded new edition came out in 2013 (it’s now out in paperback). I suggested then that every Mississippi preservationist should have one on their bookshelf, easily within reach to pull out and astound friends at dinner parties with your vast architectural knowledge.

The most helpful expansion in the new edition is the new stylistic guidance it gives for mid-century and even late-20th century houses. One short chapter is called “Monterey” in the “Eclectic Houses” section, and it’s given me a name to attach to several houses I had photographed because I thought they were interesting but didn’t know what to do with. Here’s how Virginia McAlester describes the Monterey style:

Monterey (1925-1955). Two stories, with low-pitched gabled roof (occasionally hipped); broad, dominant second-story balcony, usually cantilevered and covered by principal roof. . . . In Monterey houses, the balcony is generally the primary decorative feature on the house and extends the full width of the house–or the full width of the wing in a gabled-front-and-wing form.

The first one of this type I ever noticed was the Ross Barnett House in Belhaven. Yes, that Ross Barnett! Then, just a few months later, the Creekmore House on Old Canton Road was in the news when the Lefleur East neighborhood group wanted to use the house as a community house, so I went up there and lo and behold, it had that same cantilevered balcony. After that, it was like when you buy a certain brand of car, and then you start noticing them all over the place. Well, ok, so far, I’ve only photographed them in two other places, but I’m sure you eagle-eyed Mississippi preservationists will start pointing out all the Monterey style houses you know about.

This house in the Washington-Main Historic District in Greenville may not fully fit the definition because the balcony is not the primary decorative feature, but I thought I would throw it in for discussion. It’s also earlier (c.1919) than McAlester’s suggested range of dates. The MDAH Historic Resources Database describes it as Spanish in style. 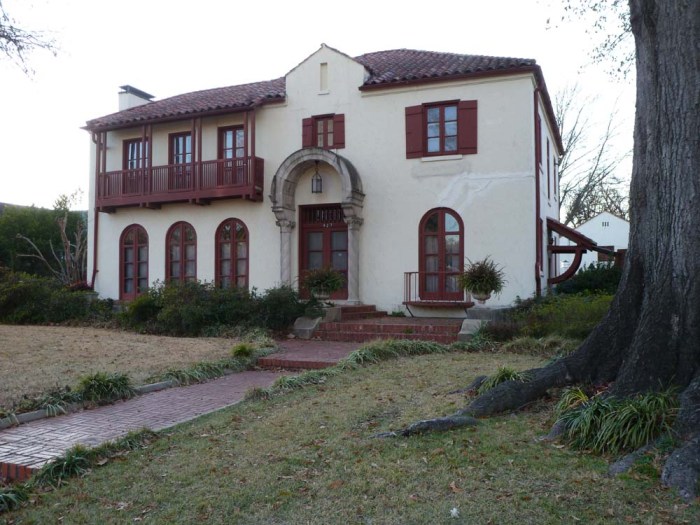 McAlester also gives a brief history of the style (p.537): 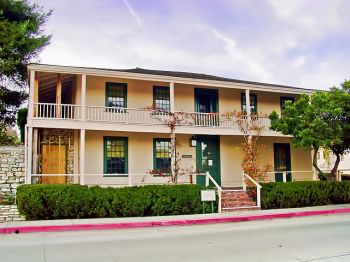 The Monterey is a free interpretation of the Anglo-influenced Spanish Colonial houses of northern California. These blended Spanish adobe construction with pitched-roof, massed-plan English shapes brought to California from New England. However, the key identifying feature of the Monterey–the full-width cantilevered balcony (or occasionally two-story porch)–was derived from house forms built in the southeastern United States, the Caribbean, and the Bahamas. The 1834 Larkin House in Monterey, California is generally identified as the first of this distinctive form of early pitched-roof Spanish Colonial houses.

California architect Roland E. Coate, Sr., played a crucial role in reviving the style. Between 1929 and 1932 he wrote about the early Monterey homes, designed at least two homes in the Monterey, and won a prestigious Better Homes in America Award for an elegant Santa Barbara example. . . .

Some early examples from about 1925 to 1940 have Spanish detailing, while those from the 1940s and 1950s generally include only English Colonial details. A third, less common variation was sometimes called Creole French; these had decorative iron balconies inspired by the upper=level balconies found in the Vieux Carre in New Orleans.

I guess I’m unconvinced about the connection of the Monterey style to the Larkin House, which is an intriguing building but looks more like the Pitot House in New Orleans and other Louisiana Creole houses in Louisiana. For one thing, I don’t see the cantilevered balcony on the Larkin House. Far be it from me to question accepted architectural history, but what am I missing?

At any rate, one last Mississippi example, brought to you from the Google streetview: this post-WWII version with an iron balcony on Grand Avenue in Yazoo City fits that last Creole French sub-type that McAlester mentions.