Home › Historic Preservation › Newspaper Clippings: “Jackson’s Past Could Be Lost”

Newspaper Clippings: “Jackson’s Past Could Be Lost”

This article, published in 1973, reminds us that only 40 years ago, the preservation movement was still so embryonic that no one could figure out how to save Mississippi’s grandest residential street, North State Street (aka U.S. Highway 51), which once was lined with ornate estates from the Old Capitol all the way to Riverside Drive. Since the the 1970s, we’ve made a lot of progress in Mississippi preservation, and the neighborhoods surrounding N. State–Belhaven Heights, Belhaven, Fondren–have been stabilized and even have become sought-after addresses for their diverse and high-quality in-town architecture. Interestingly, the historic houses that do remain on North State itself, especially that stretch north of First Presbyterian Church, seem to remain desirable, while a number of the commercial buildings that were built in this 1960s-1970s period have had long periods of vacancy and decline. Maybe a lesson here for cities that value and encourage transitory roadside development over established neighborhoods. You get your quick buck, but boy, the next stage is pretty rough.

This article also turned me on to the “Historic Sites Study,” which I hope to scan and re-publish here sometime in the near future,

Jackson’s Past Could Be Lost

In the Historic Sites Study published December 15, 1969, Donald L. Irvin, City Planning Director, wrote that “it is incumbent upon the public sector to acquire some of these properties and maintain them for posterity.” Since that date, four of the structures listed in the study have been demolished, one of them for a parking lot.

Many of the homes along North State Street, while not listed in the Historic Sites Study, are elegant reminders of another day in Jackson but are in grave danger because of the commercialization of the street. Although a number of these fine old homes are still used for residences, the owners are taxed according to the commercial land values prevalent along the street, making it virtually impossible to maintain them as private dwellings and encouraging the owners to sell them to commercial enterprises.

Construction on North State is doing great damage to the remaining homes. That section of the city is built on an unstable soil with large quantities of Yazoo Clay, causing foundation problems just with the passage of time. However, with the number of building projects going on, with the piledriving to stabilize the future structures, this foundation damage is being accelerated.

Although Irvin is the official spokesman for the City Planning Board, other employees of the Board have said merely that the character of streets change. And as the Central Business District has moved over the years from South State to Capitol Street, it is now moving to North State. The general impression is that North State Street’s time has come and there is nothing anyone can or wants to do about it in City government.

When queried about limiting the destruction of old homes in the city, Irvin said that most of these homes are privately owned and the city has no right to restrict the owner in doing whatever he wants with his property, except through zoning. Citing a Supreme Court case, Irvin said that the community can control land use, but the owner has all rights within those limits unless further control has community-wide benefit.

Enabling legislation in other states, particularly in Louisiana and Pennsylvania, has provided cities with legal tools to prevent wholesale destruction of old buildings, homes and areas of historic significance. In Louisiana, state legislation has enabled New Orleans to restrict vastly demolition and construction in the French Quarter, and in Pennsylvania, the laws have preserved large areas in Philadelphia. However, it would appear that this type of legislation is not going to be enacted in Mississippi without a strong public outcry. [Note: Mississippi now has a robust Certified Local Government program, which Jackson participates in.]

In lieu of enabling legislation, Irvin pointed out the number of preservations in Natchez. In that city, garden clubs and women’s groups have provided the funds to buy many of the historic properties when they came on the market rather than let them go to commercial ventures bent on the demolition of the structures. 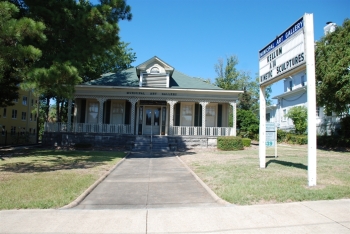 The only home in the Historic Sites Study to be preserved through simple public spirit is the Municipal Art Gallery at 839 North State Street. This home was donated to the city in 1927 by Thomas Gale to house the city’s art collection and provide rooms for women’s groups. Since that time, no other donation of this kind has been made.

The state does provide some protection for historic sites through the Antiquities Law of 1970. Under this law, the owner may place his property under protection from demolition or destruction of any kind. The only catch in this legislation is that the property may never be used for anything else other than what it was used for when placed under the Antiquities Law. [Note: This is inaccurate. Mississippi Landmark buildings have found all sorts of new uses–see Duling School in Fondren] 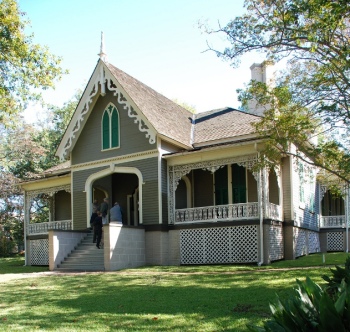 The Manship House is one of the most important historical structures in the city because it is one of the few buildings which pre-dates the Civil War and survived Sherman’s burning. The house was recently endangered when the city made its plans to widen Fortification Street. After a great deal of publicity, the city agreed to replant several 100-year-old Venetian Cedars and care for the trees to try to ensure their survival, and to relay completely the handmade brick sidewalk. The city has made every effort since the initial outcry to maintain the integrity of the site in every way.

However, there was a misunderstanding when the property was first endangered. It was thought by the press that since the house is on the National Register of Historical Places that it was automatically protected by the Antiquities Act. [Note: it seems like the press is still getting these two designations confused . . .] That is not the case. The Antiquities Act is separate legislation requiring action by the owner. It is not automatic. The owner of the Manship House has consistently refused to place the home under the Antiquities Law, and, with the provision in the law that the site can never be used for anything else, one has to wonder if the owner is truly concerned with protecting an historic site.

With the consistent loss of historical properties, lovely homes and, possibly, the old Central Fire Station, it does appear that it is incumbent upon the public sector to save some of our heritage. However, it is high time the citizens of Jackson realized that the city cannot seem to do anything and individual generosity such as that which provided the Municipal Art Gallery is a thing of the past.

Only through public vigilance and group funds can the sites and homes that make Jackson the city that it is and not Cincinnati be preserved and cherished.