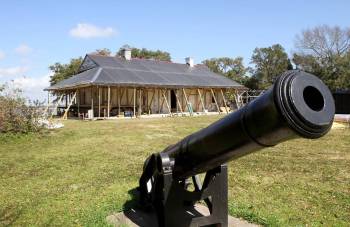 Back in February, Thomas Rosell reported that a team from the Dendrochronology Lab of the Department of Geography and Geology at the University of Southern Mississippi was beginning a dendrochronology study of the de La Pointe-Krebs House, aka Old Spanish Fort, in Pascagoula. While the house has long been thought to be among the oldest European structures in the Mississippi Valley, its date of construction has been a point of contention, with dates ranging from c.1721 in the National Register nomination to the 1770s on the MDAH Historic Resources Database Fact Sheet, which says:

Thought to have been built by 1775, and perhaps as early as 1718, this is believed to be the oldest surviving building in Mississippi. It was enlarged about 1820. In the 1990s it underwent a substantial restoration to return it to its appearance as of about 1820.

But the good news is that the dendrochronology, which uses the rings of trees as a dating method, is now complete and according to first reports, it has cleared up the muddy waters and, even better, has moved the date back into the 1750s. The Sun-Herald says: 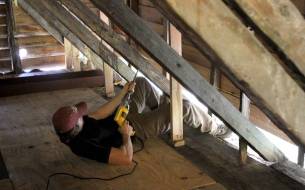 Collecting a dendron sample from the attic of the LaPointe Krebs House. Image courtesy of the Sun Herald. http://www.sunherald.com/news/local/counties/jackson-county/article61427667.html

The attic of the LaPointe Krebs House. Image courtesy of the Sun Herald. http://www.sunherald.com/news/local/counties/jackson-county/article61427667.html 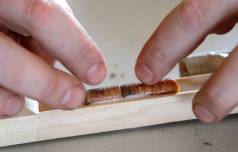 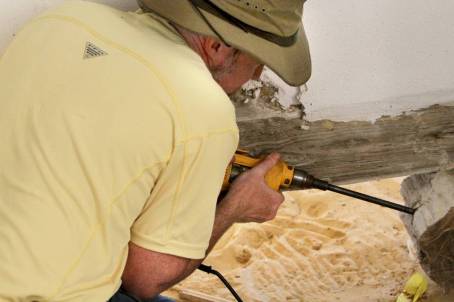 Collecting a dendron sample from the west room of the LaPointe Krebs House. Image courtesy of the Sun Herald. http://www.sunherald.com/news/local/counties/jackson-county/article61427667.html

In this case, samples from the La Pointe–Krebs House were compared with samples from a database at Eglin Air Force Base that has samples dating back to the 1500s, Harley said.

The study allowed Harley [at USM] to pinpoint when the timber for the La Pointe–Krebs House was cut for construction.

Harley said samples taken from the center room of the house were the oldest, dating to 1757.

Specifically, the bark and tree rings showed that the timber was harvested in late summer or early fall of 1757.

Samples taken from the East Room doorframe dated to 1762 and some other timbers dated to 1772. Those Harley said, were replacement timbers to repair the house after a hurricane that year.

Harley said samples taken from the West Room could not be dated because there was no bark attached. The timbers were squared and cleaned off.

Also read more about this at Gulf Live blog and at the La Pointe Krebs House website, which I see has already been updated with its spiffy new date.