How about a quick News Roundup to ease ourselves back into work and life after what I hope was a (take your pick) quiet/relaxing/exciting/adventuresome/food-filled/family-packed Thanksgiving break in which you slept/worked in the yard/cooked/read/ate/watched football/avoided people/shopped on Black Friday/watched football (did I already say that?).

Up in Holly Springs, the house best known as “Graceland Too” will go up for auction, Monday, Dec. 21, according to the Preserve Marshall County Facebook post:

What I have from Jack Baum’s architectural study of Holly Springs on this house is: “Bryant House – Built in 1853 by James McKinney, an early citizen of some prominence.”

Just spoke today with the bank president at The Bank of Holly Springs about The Bryant House, aka…”Graceland Too.” The foreclosure is set for Monday, 21 December. It is old-school here…the auction is literally on the courthouse steps, usually the south steps. The bidding will start at $5,000. If you are a devout preservationist and would like to take on a fine project at an incredibly low buy-in cost…basically “homesteading” rates…this is a REAL OPPORTUNITY. The house seems solid from my initial walk-through and is a good location, lot of nice and prospectively nice historic context. Here is how it looked when Jack Baum did his historic architectural analysis of Holly Springs, back in the 1980s.

Just down the road from Holly Springs, the diminutive Skipwith building on the Oxford Square has moved for a second time.

Also in Oxford, the Clarion-Ledger reprinted an Associated Press article reporting that Ole Miss plans to demolish the power plant building where William Faulkner wrote “As I Lay Dying.” Built in 1908, the building was Faulkner’s workplace in 1929.  The university plans to fills the spot with a large $135 million science building.

“The power plant really is the only remaining space on campus where Faulkner created significant work, and ‘As I Lay Dying’ was really one of his most significant works,” said Jay Watson, a professor of Faulkner studies in the Ole Miss English department.

Faulkner, newly married with two stepchildren, needed money when he took the job as the plant’s overnight supervisor in late 1929, working 6 p.m. to 6 a.m.

“I had invented a table out of a wheelbarrow in the coal bunker, just beyond a wall from where a dynamo ran,” Faulkner later said. “It made a deep, constant humming noise. There was no more work to do until about 4 a.m., when we would have to clean the fires and get up steam again.” 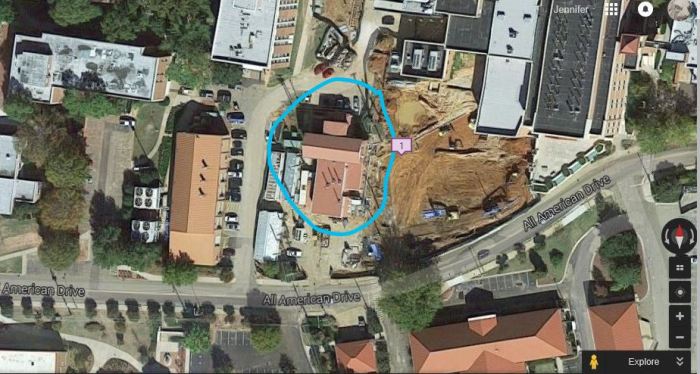 Ole Miss Power Plant, between The Circle and the stadium

University Architect Ian Banner said Ole Miss officials considered saving the building, which isn’t actually in the footprint of the new science building, but decided against it. Instead, Banner said the university will build a commemorative space.

“This option, I think, is going to be phenomenal,” he said.

The article explains that MDAH has cleared the structure for demolition, arguing that it has been altered a great deal in its lifetime and that Faulkner would probably not “recognize it if he walked in.”

The Mississippi Business Journal, among other outlets, reports that “a Colorado developer wants a shot at Jackson’s stalled Farish Street project.” I almost skipped this story because I don’t see the point at wasting energy on a project that it is now clear was never a preservation project and which has killed most of what was left of the business on the street, but since MissPres has been dutifully reporting on each stop and start (mostly stops) since the beginning of the blog, it seems kind of traditional now.

Some before and after pictures of Starkville’s newest historic preservation project, The Mill, on the Dale Partners architectural firm webpage.

And finally, don’t forget this Friday’s Old Jackson Christmas by Candlelight, with its tours of the Old Capitol, Governor’s Mansion, Manship House, and Welty House, this year from 4:30 to 8:30 and with a trolley between sites. Saturday is the special tour of the William Gardner house in Amite County from 10 AM – 2 PM.

If you know of an architecture-related Christmas tour in your town, let us know so we can put it on the MissPres calendar for all to see.