In addition to the bad news about the Port Gibson fire and the great news about the Threefoot Building last week, here are a few more news stories from the past week to help you get back on your feet after this weekend’s football excitement. 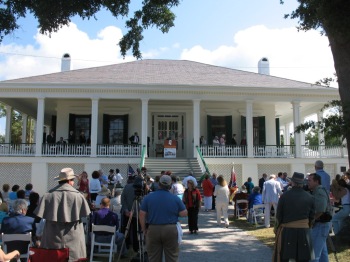 Down at Beauvoir, according to the Sun-Herald scaffolding is going back up only eight years after the multi-million dollar post-Katrina restoration. This time, repairs will deal with serious damage caused by Fomosan termites, rot, and ill-planned previous repair attempts.

Ken P’pool, MDAH deputy state historic preservation officer, said the problems began two years ago. At that time, the former management at Beauvoir noticed the decking on the front porch was deteriorating.

“Apparently there was Formosa termite damage there,” he said. Instead of applying for the required permits from MDAH for the repairs in late 2013, he said, the Beauvoir management covered the porch with new decking, discarding original hardware and lopping off the bottoms of the original shutters in the process.

“They spent a good deal of money and it did not solve the problem,” P’pool said. “It just covered it up.” Rainwater ponded and damaged the structural members of the porch and the columns, he said. 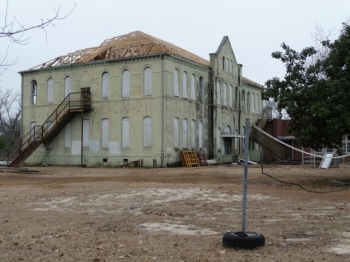 Eaton School in Feb 2010, the second try after missing the mark with the first set of trusses. Let uncovered like this for weeks.

The Hattiesburg American gives us an update on the poor Eaton School project. You probably need to read my previous rants about this morass of public corruption and private incompetence before you will understand how we got to this point.

Anyway, here’s where we are now. I’m too tired to cuss about it.

The City of Hattiesburg will spend about $70,000 to keep Eaton School standing while it decides the next steps to take with the historic but badly damaged structure.

Two weeks ago, City Council approved a $25,394 increase to a project that will temporarily stabilize the former elementary school on McInnis Avenue.

The stabilization project is the latest chapter in a tale of neglect and incompetence that has led to the near-total deterioration of the original 110-year-old heart of the Romanesque Revival-style structure.

Insult was added to injury in the late 2000s when a project to restore the building to its former glory got underway. The first stage was the restoration of the roof, but the work was botched, leaving the interior prey to the elements.

Reports put the price tag at more than $140,000, with about $100,000 coming from city coffers. The city tried to recoup some of that money, going after the bond of J. Miller Construction and Roofing.

“We started that process, and then he sued us, and it stayed on the books for a while until the court finally dismissed it,” Mayor Johnny DuPree said. “After that, we went after the bond, but the bond company basically said the statute of limitations had run out.”

To end on a brighter note, the Columbus Dispatch had a nice long article about the grand opening of the Gateway Shopping Center, Columbus’ first, and the Woolco Department Store.

Fifty years ago today, the doors of Woolco, the first Columbus department store, opened for customers.

It was, as former employees put it, a “madhouse.”

. . .”At the time, Columbus didn’t have a big store, one that had a lot of everything,” she said.

For the next 17 years, shoppers from Columbus and the surrounding areas would descend on Woolco. They came as far away as Ethelsville and Vernon in Alabama, said Virginia Logan, who worked in Ladies’ Wear and later as a merchandiser.

There was simply nothing else that big or that convenient in the area.

“They were happy because the prices were good and they could get just about anything they wanted,” Tate said.

The state’s first shopping center, Morgan Center, was right here in my own Fondren neighborhood, and the recent nomination of Jackson’s old McRae’s store, opened in 1962, brought some scholarship to the state’s mid-century suburban neighborhoods. This Columbus article adds to our knowledge about the period and the businesses that occupied our early shopping centers. 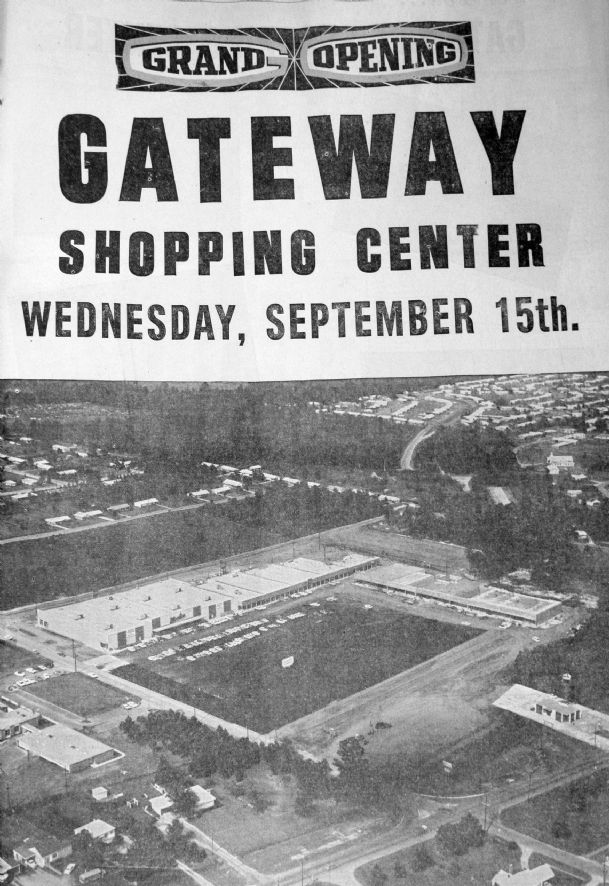