Construction began on Jackson’s municipal airport terminal building in 1936, financed by the Works Progress Administration.  Currently undergoing extensive renovation in a project supported by the United States Department of Interior, National Park Service, Mississippi Department of Archives and History, and the Jackson Municipal Airport Authority, some fairly significant work has already been accomplished.  The Mississippi Heritage Trust listed it  as one of the ten most endangered places in 2001, and with good reason.  Visit Hawkins Field and learn a bit about its role in aviation history, as well as see how deteriorated the building had become by 2008.

In 2009, $350,000 was earmarked by Congress (proposal by Senator Roger Wicker) for beginning repair on the facility as part of Save America’s Treasures grant program (President’s Committee on Arts and the Humanities).  MHT’s Lolly Barnes provided an update on the status, Hawkins Field Terminal in 2013. 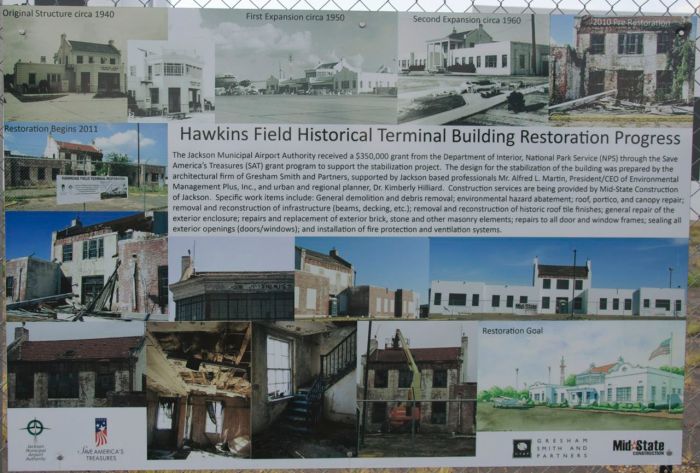 While the exterior does not appear to reflect any additional restoration since the 2013 update, there is new signage, and clearly some work has been going on behind what is currently visible.  Take a closer look at the Restoration Goal:

As Urban Decay noted in the earlier post, there are a number of important facets in the history of the airfield.  In 1941, it was renamed Hawkins Field from Davis Field, and also became the Jackson Army Air Base in 1941.  MDAH blog A Sense of Place provides historic information that is not well-known about Jackson’s Flying Dutchmen and also includes some pictures of the original terminal building.  Hawkins Field was announced as the site for pilot training school on June 22, 1940 in connection with aviation expansion.  In January 1941, M. T. Reed Construction of Belzoni was awarded the contract for $1,377,000 for construction at the airfield as announced by the War Department (Biloxi Daily Herald, January 24, 1941).

Construction of the original terminal was not without its political overtones, and the April 22, 1937 Biloxi Daily Herald featured a page 1 story by Jackson’s mayor.

The mayor asserted that WPA officials in Washington were discriminating against Jackson, and were showing favoritism toward Meridian in municipal airport improvement projects.

Airway traffic was suspended here several weeks ago because of the condition of the landing field while runways are being laid.

“We are not complaining about action of state WPA officers,” the mayor said, “but the fact remains that Meridian’s airport is almost paved and ours is only in the process of being graveled…Jackson has more air traffic from Chicago to New Orleans from east and west than Meridian, yet that airport has been favored.”

“We believe there is favoritism somewhere, even though we cannot make specific charges.”

In August 1937, Mayor Scott announced the city was seeking additional funds to pave another runway, in addition to the one “recently completed;”  in July, Meridian airport was still several months away from completing a paved runway.

By 1941, the [Jackson] airport had five paved runways, a beacon, a control tower and weather station, and was handling about 300 flights per month. (Mississippi Department of Archives and History, Historic Resources Inventory)