Today’s end-of-year list is of all the buildings that the Mississippi Department of Archives and History designated as Mississippi Landmarks. Often confused with the National Register, which is administered by the National Park Service, the Mississippi Landmark designation is completely under the control of the MDAH Board of Trustees, and it is the stronger designation because it gives MDAH the authority to review any proposed alterations to the landmark, including demolition.

The designating authority comes from the Mississippi Antiquities Act (Code of 1972), which states:

(39-7-11) (2) All other sites, objects, buildings, artifacts, implements, structures and locations of historical or architectural significance located in or under the surface of any lands belonging to the State of Mississippi or to any county, city or political subdivision of the state may be declared to be Mississippi landmarks by majority vote of the board. Every Mississippi landmark shall be so designated based upon its significance within the historical or architectural patterns of a community, a county, the State of Mississippi, or the United States of America. Upon such action by the board, the designation of the Mississippi landmark shall be recorded in the deed records of the county in which the landmark is located. All such designated sites or items located on public lands within the State of Mississippi may not be taken, altered, damaged, destroyed, salvaged, restored, renovated or excavated without a permit from, the board or in violation of the terms of such permit.

Most photos below and all of the accompanying text came from the Significance Reports prepared by staff in the MDAH Historic Preservation Division for review by the Board of Trustees.

Prospect Hill, in Jefferson County, is nationally significant for its association with the Wade and Ross families and a will contest regarding the emancipation and repatriation on the plantation’s enslaved people. Colonel Isaac Ross came to Mississippi from South Carolina in 1805 and established Prospect Hill. When Ross died in 1836, his will directed that many of the enslaved people be freed and offered transportation to Liberia. His grandson, Isaac Ross Wade challenged the will and a lengthy legal battle ensued. In 1845, some of the slaves set fire to the house, resulting in the death of one resident, and resulted in the hanging of a number of conspirators. Ross rebuilt Prospect Hill in 1854, likely on the foundations of the earlier house. Wade’s executors ultimately prevailed in the will contest and in 1849, somewhere between 250 and 300 freed slaves settled in Liberia. The story of Prospect Hill encompasses the antebellum world of slavery, emancipation, the cotton economy, violence and lynchings. Designated a Mississippi Landmark on January 24, 2914.

The Lynville School, in Kemper County, is locally significant for association with Education. Constructed in 1941 with WPA funds with a design from a state-approved standardized plan, the Lynville School served the rural community as a school for white students from grades 1 through 12. After the school closed in 1972, it was used as a glove factory. The entire Lynville School campus was designated a Mississippi Landmark on January 24, 2014. Photo by Suzassippi. 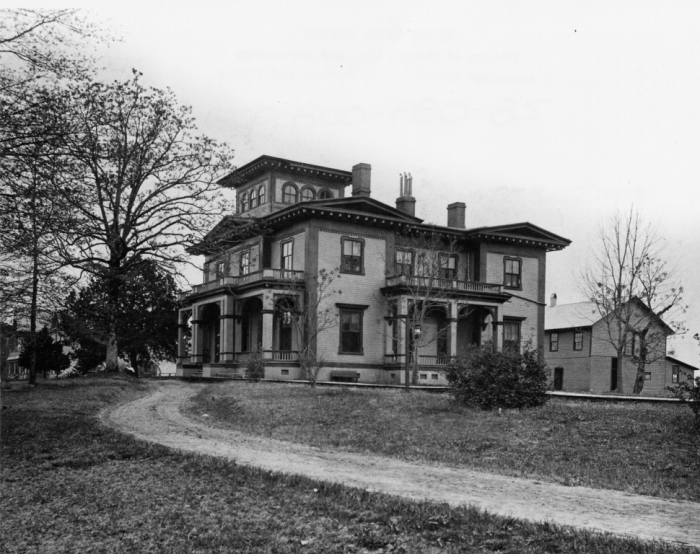 The Tougaloo Mansion was built for J. W. Boddie, a wealthy planter who died at the end of the Civil War and whose house became the nucleus of Tougaloo College, a site significant to the educational history of black Mississippians. Founded in 1869, Tougaloo College is an early and successful example of the movement to educate newly freed blacks and to place them into an honorable position within Southern society. Tougaloo Mansion served as a dormitory, a classroom building, the library, the president’s residence and an administrative office building. The Mansion is perhaps the most conspicuous extant work of the locally important architect and builder J. Lamour of Canton, Mississippi, who claimed to be proficient in the “…Swiss, Italian, Elizabethan, Norman and Old English styles.” His capabilities were supplemented by woodwork manufactured by Hinkle, Guild and Company of Cincinnati who illustrated an elevation and plan of the house in a circa 1865 catalog. Designated as a Mississippi Landmark on January 24, 2014. 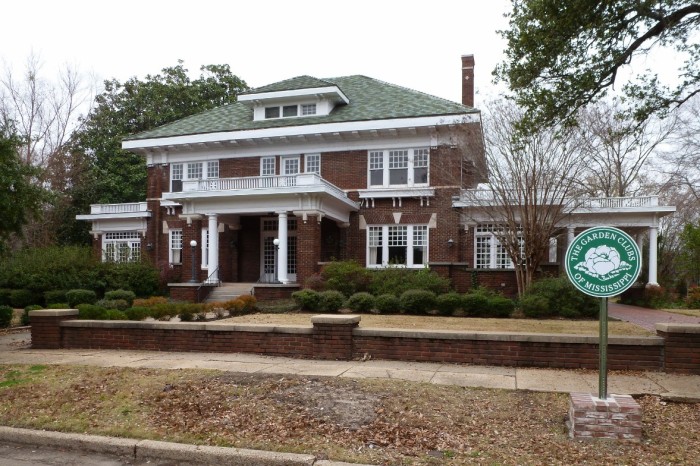 Built in 1915, the W. M. Whittington House in Greenwood is a two-story, single-family residence with elements of both Neo-Georgian and Prairie styles that is now used as the State Garden Club Headquarters. The house was designed for William Madison Whittington, who represented the Third District in Congress for thirteen consecutive terms, by Bem Price of Birmingham. Whittington devoted a great deal of his attention while in Congress to the enactment of agricultural, flood control and highway legislation. In 1938, as chairman of the Flood Control Committee, Whittington successfully steered to adoption the most comprehensive flood control measure in the history of the nation. The Whittington Act, as it became known, authorized the colossal sum of $386,500,000 to be used in the principal basins of the United States. Locally, the bill brought about the taming of the Yazoo River system. Designated a Mississippi Landmark on January 24, 2014.

Built in 1924 by the Hamsa Shriners, the Temple Theater in Meridian is four stories and occupies half of a city block. The Shriners leased the theater to the Saenger movie chain in 1927, which completed the interior. It is a significant example of Moorish Revival architecture applied to a 1920s movie theater. Designated a Mississippi Landmark on April 25, 2014.

The Christian & Brough Building (923 Washington St.) is locally significant as one of the first automobile dealerships in Vicksburg and as the first Studebaker and Packard dealer. The building offers a transition in the history of transportation from carriage manufacturing and the need for blacksmithing to the first automobiles. The period of significance extends from the construction date of 1905 to 1942 when the building no longer housed an automobile dealership. Designated a Mississippi Landmark on April 25, 2014.

The 1907 House at Prentiss is the site of the 1907 founding of Prentiss Normal and Industrial Institute, one of the oldest educational institutions for blacks in Mississippi. It is representative of the rural vernacular cottage constructed during the nineteenth-century settlement period in Mississippi. The house and eighty acres were purchased by the founders of Prentiss Normal and Industrial Institute in 1907. Designated a Mississippi Landmark on July 18, 2014. 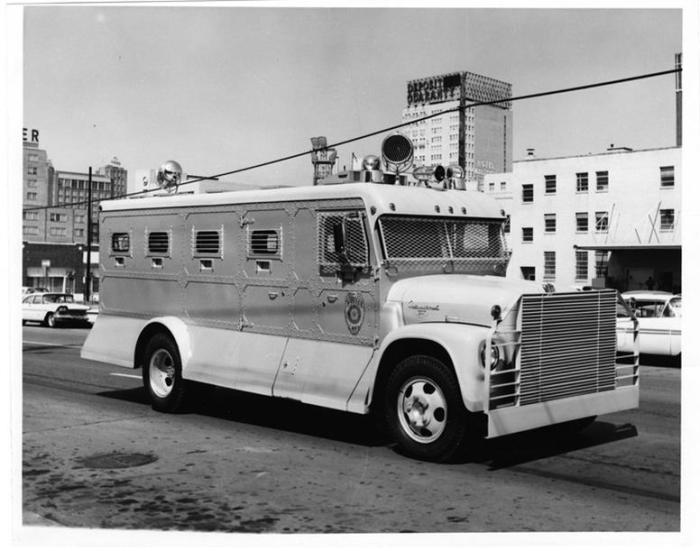 Thompson’s Tank is an International Harvester Loadstar 1600, outfitted with armor, metal bars, grating, searchlights and sirens. It was originally painted light-blue with white trim and equipped with mounted machine guns. In 1990, the tank was renovated, painted black with blue insignia and repaired for use as a Police S.W.A.T. vehicle. It is currently parked at the Jackson Police Department’s rifle range. Thompson’s Tank is significant because of its association with the civil rights movement in Jackson. In 1964, Mayor Allen Thompson approved its purchase in preparation for the arrival of the civil rights workers. It was intended to intimidate and threaten the activists. The tank was first used at Jackson State in February 1964. On that occasion, a tear gas canister exploded inside. In 1968, the truck was borrowed by Memphis police to transport James Earl Ray after he shot Martin Luther King Jr. It was also used at Jackson State during a riot in which two people were killed in May 1970. Designated as a Mississippi Landmark on July 18, 2014.

The John Bowman Banks House was the home and office of the first African American physician licensed to practice in Natchez. John Bowman Banks was first issued a medical license by the State of Mississippi in 1885. His license was filed in Adams County in 1889. The house was constructed in 1890 and extensively remodeled by Dr. Banks from 1904-1910 in the Colonial Revival style. Designated a Mississippi Landmark on July 18, 2014. 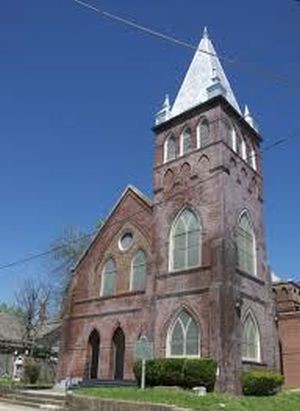 Rose Hill Missionary Baptist Church in Natchez is the oldest Black Baptist congregation in the state of Mississippi. The 1911 building is a good example of a Gothic Revival church with a rare 1912 Moller pipe organ. Designated a Mississippi Landmark on July 18, 2014. 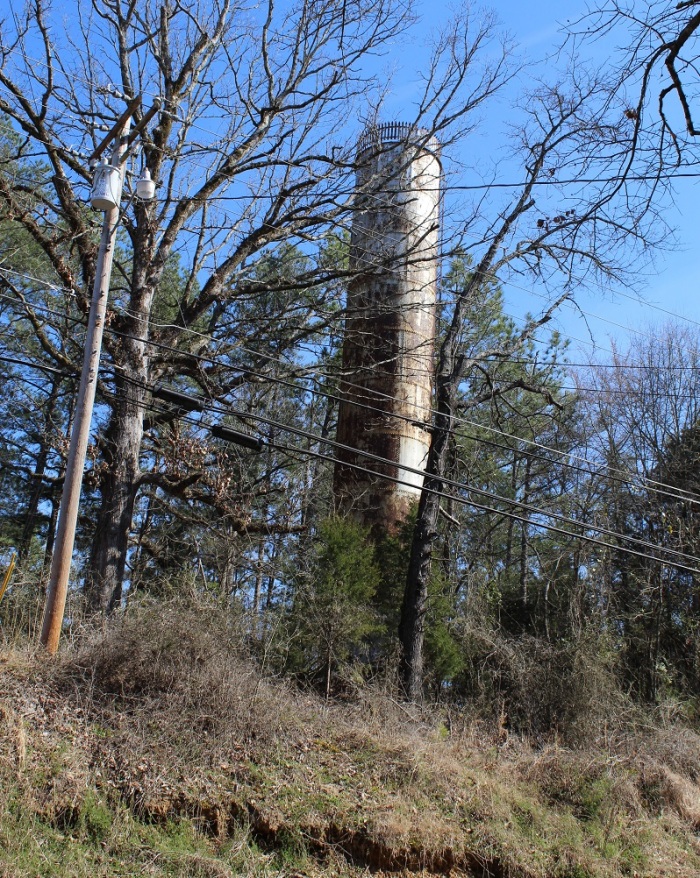 The Carrollton water tower, constructed c. 1904, is locally significant for association with Community Planning and Development and Engineering. The water tower and the water distribution system it served illustrates the community’s commitment to providing a stable and safe supply of water to the town’s households and businesses. The city constructed a new water tower in 1979 and abandoned this standpipe. Designated a Mississippi Landmark on July 18, 2014. 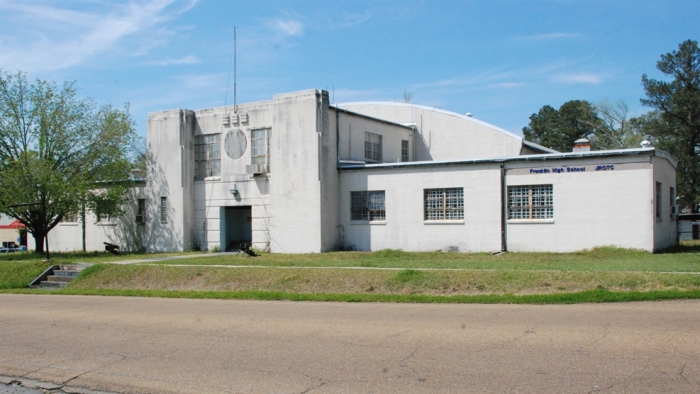 Built in 1938, Meadville’s National Guard Armory is identical to the armory in Amory, which was designated a Mississippi Landmark in 2002. The building is an excellent example of the Art Moderne style of Overstreet and Town. It is now used as a JROTC building by the Franklin County School District. Designated a Mississippi Landmark on April 25, 2014.

The Jourdan River School is locally significant for association with Education as the only remaining rural African American school in Hancock County. The only other surviving African American school, Valena C. Jones School in Bay St. Louis is a much larger Equalization-period building and represents a more urban consolidated school than Jourdan River School. Although the 1927 deed to this property refers to the “Trustees of Rosenwald School of Kiln, Mississippi” there is no evidence that this building was ever a Rosenwald school. Only one school in Hancock County (Logtown, 1921–demolished) received Rosenwald funding. The school has been vacant and abandoned since consolidation in the late 1950s. It had more recently been overgrown with a thick pine forest and was re-discovered when that was logged in 2013. While suffering from decades of neglect, the building’s sturdy lumber frame is still repairable, and a group of alumni and other interested local people have banded together to try to repair it for use as a community meeting space. Designated a Mississippi Landmark on July 18, 2014.

The Morning Star School in rural Hinds County is locally significant for association with Education and as a rare local example of an early equalization school. Constructed in 1948, this building received funding of $3,493 from the state’s initial school equalization effort, begun in 1946. While later equalization schools were much larger consolidated schools, buildings in this first equalization program tended to replace decrepit African American school buildings of similar size with a better-built, often concrete block structure that conformed to current educational building standards. After its abandonment as a school in 1965 (a victim of the second, consolidation phase of the Equalization Program), the building served as a residence and later a Head Start and Neighborhood Youth Center. Designated a Mississippi Landmark on July 18, 2014.

According to MDAH, all of this year’s landmarks were designated at the owners’ requests, so congratulations to these owners who take their responsibilities to their historic properties seriously and have shown an intent to renovate and maintain them.

Tomorrow, we’ll look at a list of the properties that were proposed for designation in 2014 but didn’t get the support of the MDAH Board of Trustees.