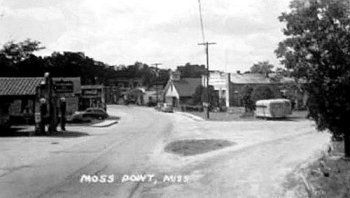 It was city hall. It was a jail. It was a water works building. It was a public bathhouse. It was a library. IT IS WORTH SAVING.

When faced with intractable city officials, apathetic citizens or a general lack of funds in trying to save a special historic place, what is a preservationist to do? Whatever works.  The struggle to save the Moss Point Central Fire Station will come down to making sure that the people who care about saving this historic resource have their voices heard.  Sadly, that is not happening right now.  Local preservationists are committed to the fight and plan to launch an online petition, put up posters and signs and ask civic groups and churches to pass resolutions requesting that the city to reconsider its decision to demolish the building until they have explored all possible options for redevelopment.

I remember when I worked for the City of Biloxi, a developer unveiled his plans for two twenty-story condominium towers to be constructed on a tree-filled site on Beach Boulevard, next to historic Tullis-Toledano Manor.  Constructed in 1856, Tullis was a jewel of a building, set in a lush park of Live Oaks.  Purchased by the City of Biloxi in 1976 and restored as part of the nation’s bicentennial celebration, Tullis was the site of many a wedding and family picnic before being demolished in Hurricane Katrina in 2005 (you can see pictures of Tullis at www.savemyplacems.com).  Well, you can imagine that the Friends of Tullis were none too keen to have this new development as a neighbor.  Marylyn Gibson, president of the Friends of Tullis, called a meeting to get input from the public on the proposed project.  I sat next to Marylyn and Mayor Holloway before the meeting was to start, just hoping beyond hope that people would care enough to speak out.  All of a sudden, a line of cars started turning into the driveway.  What a meeting it was!  A meeting that was followed by petitions, city council meetings and some very vigorous garden club ladies camped outside of the mayor’s window with signs reading “Honk if you love your Live Oaks”.  This public outpouring of feeling resulted in the denial of permits for the condominium development and the purchase of the property by the city, which later became the site of the Ohr-O’Keefe Museum of Art.

So, what are some ways that you have seen citizens change the path of the “done deal” development?  What are the preservation success stories from your community that Moss Point can learn from?  Please share your ideas and comments about your own “aha” moments and help this small town find a way to make preservation a part of the public dialogue.