Whether you call it a masonry screen or a concrete block screen, I sort of fell in love with them first when Malvaney (not the original) wrote In Praise of Masonry Screens.  Then, Thomas Rosell whetted my appetite with a little Screen Block Bingo.  Although I had driven by the Village Apartments any number of times in the last 10 years, not until TR’s bingo challenge did these screens leap out at me, beckoning closer inspection.  So, every day since February, as I have gone to work I said to myself that I needed to take a picture of those and check them against the bingo screen.  Once I set my mind to it, I will eventually get around to doing it–it may have taken me 3 months, but that’s pretty quick for me these days.

There are two remaining sections of the Village Apartments housing on campus–what was once no doubt called “married housing.”  Many were demolished to make way for the new law school building.  Still standing is the 1961 unit designed by Thomas Henry Johnston, Jr., who was apparently quite prolific in the state between 1935-1965 (Mississippi Department of Archives and History, Historic Resources Inventory database).  He was particularly active in the Starkville area, and also designed other Village housing and faculty housing on the UM campus.  The builder was Forcum and Lannom. 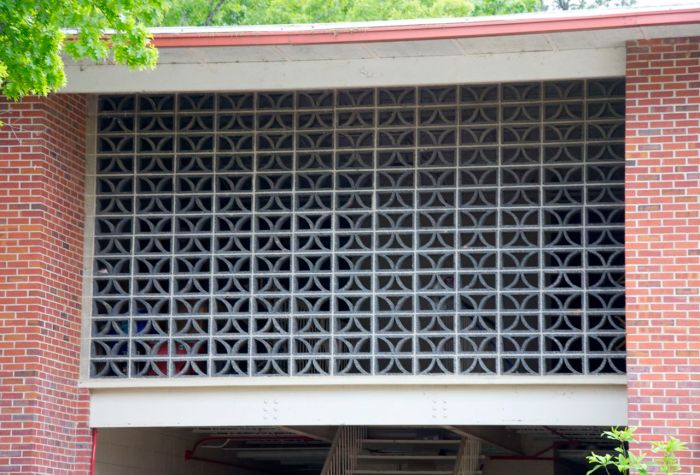 The design–while not making it to TR’s screen block bingo game, is known as the hidden circle.

Even more exciting, when one considers I have been passing by history for quite some while now without even knowing it, is this double y design, by none other than the real Edgar L. Malvaney & Associates.  Malvaney designed this section of the Village Apartments in 1963, and builder was Fred P. Simmons Construction (MDAH, HRI).

Concrete block screens, or masonry screens, were used for privacy, decoration, and shade, while still allowing air flow.  This would have been important in Mississippi summers in the 1960s to allow some ventilation to reach the interior hallways of these buildings.  While the buildings are now equipped with window units, no doubt the screens continue to help circulate air while giving a modicum of privacy to the families who live there while students at the university.  Though one just never knows what will happen in the decisions to save or demolish a campus building, here’s hoping these mid-century moderns stick around.  On pleasant days, I love the picture of the clothes drying on the clothesline out back, often little baby clothes, and enjoy the thought of families having the opportunity to better the life chances of those babies through parents’ education.  Sometimes I wonder how much longer families will call this place home.  Clothes on a clothesline?  Next to the law school?