Home › Architectural Research › A Little Contest: Like a Ton of (Concrete) Bricks

A Little Contest: Like a Ton of (Concrete) Bricks

So this morning we had a mini contest about a material that is on the primary facade of a building on 28th Avenue in downtown Gulfport.  All the answers were pretty spot on but the answer that contained all the right buzz words was given by Brian Askew.  So what makes a brick over a block?  And who says a brick has to be made of clay?  Merriam-Webster defines a brick as:

Our concrete brick is 2″ tall by 7 1/2″ long by 3 1/2″ wide, about the same dimensions as defined by Merriam-Webster.  The concrete was mixed with a red pigment to give a fairly similar appearance to a red clay brick.

The concrete brick as we know it was developed in the early 1900’s and by 1913 had picked up the name “Crozite” brick, named for the assignor of several patents regarding the making of concrete brick, Alfred Crozier.  The further evolution of the concrete brick industry was hampered by the lack of provisions regarding its use in building codes, which were also being adopted for the first time in many cities across the United States.  In 1921 Columbia University’s Testing Department sought to compare concrete bricks to that of clay, and help set some baselines on which specifications could be developed by the American Society for Testing and Materials (ASTM) with the ultimate hope of concrete brick being recognized in building codes across the United States.

Magazines like The American Contractor and The American Architect praised the research completed by Columbia University, stating that concrete bricks are better made, are stronger and last longer than similar clay brick.  But – maybe not surprisingly- publications such as Brick and Clay Record not only found fault with the Columbia tests but also disparaged concrete brick from every imaginable angle.  They stated that the process of mixing the concrete before it is formed into bricks is often not uniform and that concrete brick is difficult to lay due to laitance that occurs as the concrete sets up.  There was a great deal of push back from the clay brick industry.  The clay brick industry claimed that the Columbia study did too little to proved the ability of concrete brick, and only disparaged clay brick to make its case for concrete bricks.  Ultimately in 1922 the ASTM committee on brick withdrew is specification for concrete block due to inadequate data.

Fast forward to the building boom/material shortage of the post WWII years and concrete brick finally getting a ASTM standard in 1939, all lead to concrete brick became much more popular.  This time period is when our contest subject was built.  For a simple little building the choice of a concrete brick facade was a pretty unique one.  The building, built c. 1948 is primarily made of concrete block with some cast concrete square columns in the side walls for additional strength.  According to the 1949 Gulfport city directory, while 1313 28th Ave. (back then 1319) was yet to be occupied, the first tenant in 1311 28th Ave. (back then 1317) was Echols Auto Parts.  The building first shows up in the Gulfport Sanborn fire insurance map of May 1950.  On busy 28th Avenue, where it seems all the other businesses are fire hazards, it humbly states that it is a store made of “C. BR.” identified in the key as Concrete Brick.  The fire proof-ness of the building was probably important to Echols Auto Parts as they were driven from their previous location by a fire.  By 1961 according to the Sanborn fire insurance maps of that year the entire building was being used as a Furniture Warehouse. 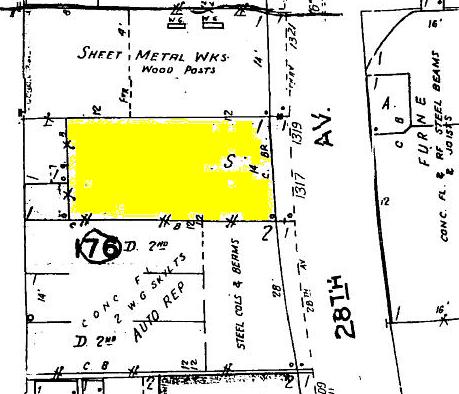 In the 21st century concrete brick is still seen as a outsider but is somewhat embraced as a low-cost alternate to traditional clay brick.  It just goes to show you never can tell what a material might really be.  Thank you to all contest participants!  All y’all  get 10 points and a gold star.  Make sure you get out this weekend and impress your friends with your knowledge about concrete bricks! :-)