Travelling by Trolley in Mississippi: Columbus

Today’s post is Chapter 1 in our series re-printing Frank Brooks’ “Travelling by Trolley in Mississippi: Stories about Streetcars.” View other posts in the series at the “Streetcars” tab.

In 1916, the Columbus Railway, Light and Power Company was operating at its height. The company was a system whose railway division included 5 miles of track and 14 cars. The line was owned and constructed by Judge Leopold Marx and Mr. G.T. Heard in 1906. A photograph taken on the line’s first day of operation shows three open air cars lined up along with a brass band, a dog, and Columbus dignitaries including Mayor J.T. Gunter, Percy Maer, B.A. Weaver, J.W. Steen, J.L. Walker, Judge Marx and Mr. Heard. Many of the citizens of that refined city were crowded into the cars. 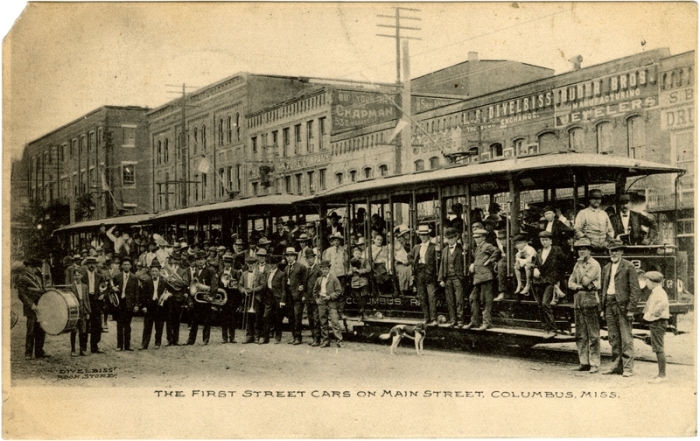 One of the Columbus lines started at the Mobile and Ohio Railroad station alongside the present Mississippi University for Women campus at South 6th street and 8th Avenue. From that point, it wound its way through downtown, past the college president’s home, ran east of the Columbus and Greenville Railway tracks and eventually terminated at a park and dance pavilion which is the present V.F.W. Park. Returning downtown, the cars gave passengers the option of retracing the same route, or of transferring to another line at the corner of Main and 5th Sts. for a ride in one of the smaller, enclosed cars which traveled out Military Road to the corporate limits of the city.

It has been suggested by several old-timers that open cars of the Columbus system were a test of vigor and durability of the passengers! In winter, the riders simply wore more clothes when they rode the trolley downtown or back home. However, rainy days were even more of a trial than cold weather. An article written some time ago by Elizabeth G. Vestal about Columbus trolleys notes that during rains, motormen sometimes simply stopped their cars to let passengers seek shelter on a nearby front porch!

There were two tracks in the middle of downtown Main St. and from time to time, those tracks received a soaping by some of the mischievous boys who lived in the city. That little trick is remembered as causing problems for the motormen and passengers alike. As the cars traveled downhill, the wheels would slide along the rails when the brakes were applied. That being true, cars on the soaped tracks sometimes slid right past their regular stops. As the cars traveled uphill, the passengers were sometimes required to get off and walk, because the stalled trolleys were incapable of doing much more than spinning their wheels and showering sparks from their trolley poles which were in contact with the live wire!

The operation of streetcars in Columbus ended in 1922. With the passing of that era, I cannot imaging that it was ever again as much fun to go to the park, zoo and skating rink by another means of transportation. Slow schedules, mechanical failures, trolley poles jumping the overhead wire and so on are now but distant memories for those who rode and loved the Columbus trolley cars during their short life span of 16 years. However, time has marched by rapidly since their discontinuance. Proof of that truth is the fact that many of the cute girls who were in college at Columbus during those trolley years are now great-grandmothers! 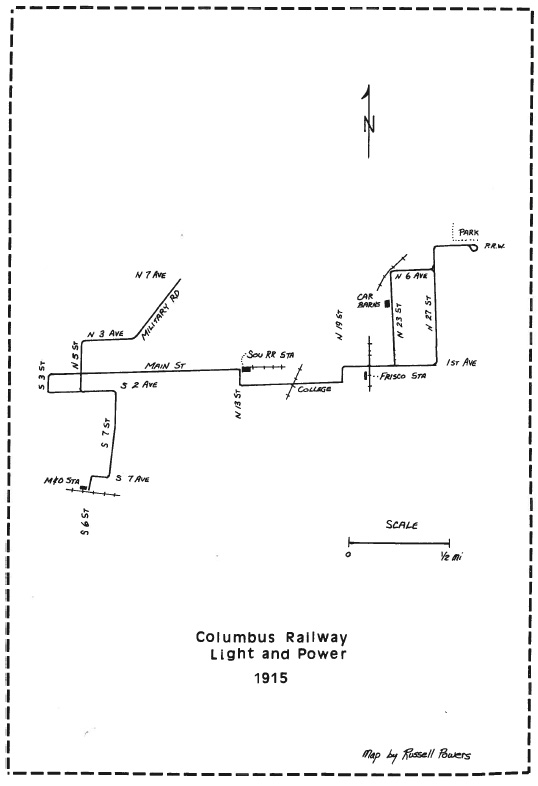