Catching up on my e-mails after my internet-less vacation, I found one from MissPreser Charles Bell, who passed on a link to a booklet I’ve been trying to buy with no success, Picturesque Vicksburg: A Description of the Resources and Prospects of that City and the Famous Yazoo Delta, originally published in 1895 by H.P. Chapman and J.F. Battaile. I’ve kept an eye out for this booklet on my favorite used book site, abebooks.com, but all they have had so far are new Print-On-Demand books, which I shy away from as being less interesting and of lesser quality than the original.

Anyway, I can cease my constant searching since the Internet Archive now has a beautiful digital copy that I can access whenever I want and pull photos from easily. The title page boasts that the publication is “Profusely Illustrated,” and this is not false advertising. Many professional photographs and line drawings highlight the text, which provides a useful and interesting perspective on what was then the largest city in Mississippi and the “New Wonderland” of the Delta.

Remember Speed Street School, built in 1894 and torn down in an act of wanton destruction in 2009? Picturesque Vicksburg reminds us of a time when it was new:

The South Vicksburg School building is a splendidly built brick structure, recently provided, for the convenience and benefit of the southern extension of the city, as well as to enlarge the general facilities of accommodation for the rapidly growing needs of the educable population. This building is arranged for both boys and girls, and is thoroughly equipped with most of the modern improvements (p.95).

Or Kuhn Hospital, which began life as the state’s charity hospital?

The State Hospital, originally built for a private residence, but remodeled, is on the Jackson road, at the northeastern limits of the city. This institution has an annual endowment of ten thousand dollars, contributed jointly by the city, county, and State, besides a considerable revenue from the Marine hospital service and private patients. It is a well managed institution conducted in accordance with the most improved methods of modern medicine and surgery, and has a capable staff, headed by Chief Surgeon S.D. Robbins and his able assistant Dr. John H. Purnell, who are among the state’s most brilliant medical men. A numerous class of interns assist in caring for the patients, and derive great benefit from the experience thus acquired. The hospital is a handsome brick building with spacious and elevated grounds (p. 90).

And how about our old friend William A. Stanton? Well, in 1895, his daddy William Stanton was still the main man in town for building and designing buildings, at least according to his ad on page 149 (he was also the architect for the above Speed Street School): 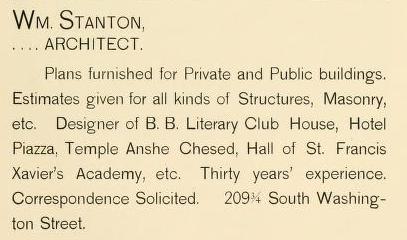 There’s even a picture of St. John’s Episcopal Church in Lake Washington, built in the 1850s, but already being called a “ruin” in 1895 (page 73), and lots more to see and learn.

Thanks to Mr. Bell for sharing this find of his!