Home › Mississippi Towns › Forest › How many bricks were in Forest High School?

How many bricks were in Forest High School? 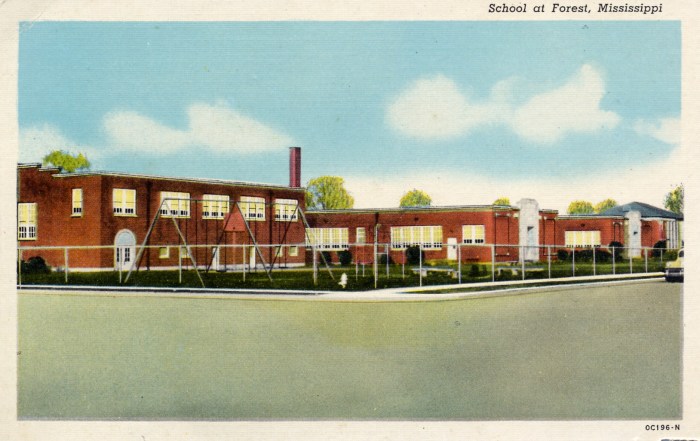 Built in 1934, the Forest High School was designed in a joint venture by Jackson architects E.L. Malvaney and C.H. Lindsley. It burned down sometime in the 1960s or 1970s, but the dedication plaque is in the current building.

I just finished a fascinating article in the Atlantic that I hope you’ll find time to read this weekend. It’s called “Autism’s First Child” and it’s about the first recognized case of autism ever, Donald Gray Triplett, a man born and still residing in Forest, Mississippi. It tells the story of his diagnosis by a Johns Hopkins doctor, his short time at the Sanitorium, his parents constant attention, and his gradual acceptance in the community.

Obviously the article’s primary interest has nothing to do with architecture or historic buildings, but there was one little segment that plays a key role, relating the local lore in Forest that Mr. Triplett had, in his youth, counted all the bricks in the high school building.

Indeed, Donald was something of a local legend. Even people in neighboring towns had heard of the Forest teenager who’d calculated the number of bricks in the facade of the high school . . . merely by glancing at it.

Turns out, like many such intersections of architecture and the Southern story-telling impulse, this story is mythical, and in fact doesn’t even identify the correct building. This is how Mr. Triplett himself remembers the episode.

But he never could count bricks. This, it turns out, is a myth.

Donald explained how it had come about only after we’d been talking for some time. It had begun with a chance encounter more than 60 years ago outside his father’s law office, where some fellow high-school students, aware of his reputation as a math whiz, challenged him to count the bricks in the county courthouse across the street. Maybe they were picking on him a little; maybe they were just seeking entertainment. Regardless, Donald says he glanced quickly at the building and tossed out a large number at random. Apparently the other kids bought it on the spot, because the story would be told and retold over the years, with the setting eventually shifting from courthouse to school building—a captivating local legend never, apparently, fact-checked.

Hey, if local legends were fact-checked, there would be a lot less fun in life, wouldn’t there? Congratulations to Mr. Triplett for throwing off those guys with such aplomb and winning himself an aura in the process! It goes to show that the best way out of uncertain situations is to project confidence, assume you will be believed, and watch people bow to your perceived authority.

Have a great weekend. And read this story!