As you may recall from Monday’s post, I mentioned that the same African American architectural firm that designed the Carnegie building at Mississippi Industrial College, McKissack & McKissack, also designed the Taborian Hospital in Mound Bayou, opened in 1942.

The Taborian Hospital was one of only two African American hospitals in the state during the first half of the 20th century. Operated by a fraternal organization, the International Order of twelve of Knights and Daughters of Tabor, the hospital provided bare-bones but professional health care, and also served as a training ground for health professionals in the African American community and played a role in the Civil Rights movement. 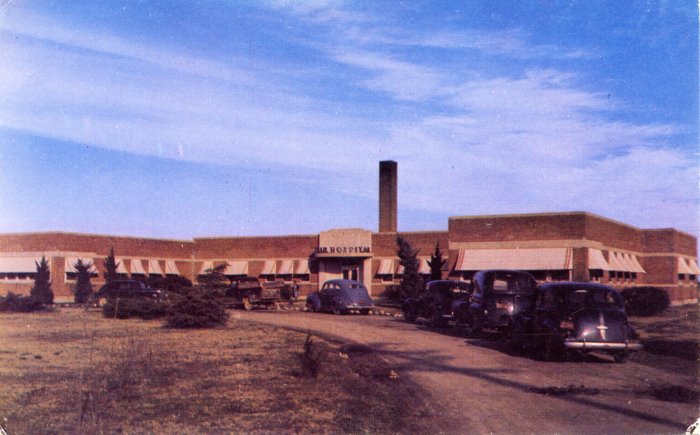 As luck would have it, I found and snatched up an old postcard of the hospital a month or so ago, and then as I was searching for something else in the early 1940s Cleveland newspaper, the Bolivar County News, I came across an article about the Taborians and the hospital just after its opening. Part history of the Order, part patriotic assurances, part plea for donations, the article—dated December 3, 1942 and apparently submitted by someone associated with the Taborians–is a vivid depiction of the difficult and tenuous place occupied by even professional and upwardly mobile African Americans in 1940s Mississippi.

Only Two Negro Owned And Operated Hospitals In Mississippi

The Taborian Hospital at Mound Bayou is sponsored by the Knights and Daughters of Tabor, a fraternal order of purely Negro origin. This Order was founded in 1872–seventy years ago in Inedpendence, Missouri. The founder, Reverend Moses Dickson, was a minister of the African Methodist Episcopal Church and a native of the state of Ohio.

The full name of this fraternal order is, International Order of Twelve of Knights and Daughters of Tabor. It is a co-incident that this organization was formed in a town by the name of Independence, because it is designed to teach Negroes the art of co-operation as a means of promoting self-help through encouraging initiative in essential enterprises.

It is significant that the Order of Twelve Knights and Daughters of Tabor came into being just nine years after the issuance of the Emancipation Proclamation and thus had its beginning in the very morning of Negro freedom.

It was the purpose of the founder that the Order of Twelve should serve as a sort of school in which Negroes may be taught the arts of civilization through organized social contact and co-operation. It is more than a mere custodian of weird legends and peculiar signs and ceremonies. It seeks to meet the most urgent needs of an under-privileged struggling people. The simple philosophy of the founder was that “What one man cannot accomplish, many men, unified, can.” Through organized effort our individual powers become a tower of strength by which the greatest good may be wrought for the group.

The primary mission of Tabor is to bring direct relief to the sick, administer to the distressed and teach the beauty of Christian character by precept and example.

Tabor is the name of a biblical mountain in Galilee and the story of its significance will be found in the fourth chapter of the book of Judges.

This Order is exclusively racial in its membership but from the beginning has been one hundred percent American in its functions. It is founded upon principles of democracy and preaches no other gospel and fights to maintain no other way of life.

The Knights and Daughters of Tabor was organized in the state of Mississippi on March 13, 1889–more than fifty-three years ago. Through depressions, floods, wars and economic disorders, many difficulties have been encountered but by persistent faith and dauntless determination Tabor has marched on without halting step.

We operate under the supervision of the state Insurance Commission and have striven to prove our worthiness as a Mississippi institution. The Order is assigned the task of building within its membership a racial consciousness and confidence and bring about through its organized activities inter-racial goodwill. Members are taught to be law-abiding citizens and to respond with becoming loyalty to every call of the Government. Our order in Mississippi has purchased $12,500 in War Bonds during the present year.

The Taborian Hospital at Mound Bayou is our chief project and perhaps meets the greatest need of Negroes in the state. It is revealed by official statistics that the Negro population of Mississippi is more than one million and that the Afro Hospital in Yazoo City and the Taborian Hospital in Mound Bayour are the only two institutions of health, with ample hospital facilities and equipment, owned and operated by the race. It is further revealed that there is only seven-tenths of a hospital bed for each thousand of Negroes in the state. We have therefore entered the field of hospitalizations to bring some measure of relief to this very unfortunate situation. The enormous death rate among colored people is largely accounted for in the shortage of ample hospital facilities.

We have been brought to realize that the cost to maintain and operate properly this institution of health is quite heavy to be carried by a low income group.

Sufficient finances to meet all requirements is our present problem.